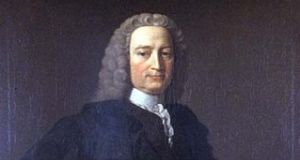 Portrait of Hutcheson by Allan Ramsay, circa 1745.

Before it became central to the US declaration of independence, “the pursuit of happiness” was a concept much pondered by thinkers this side of the Atlantic, including the man who may have coined the phrase, Francis Hutcheson.

Probably the most influential Irish person you’ve never heard of, Hutcheson was born 325 years ago today near Saintfield, Co Down, and died 52 years later in Dublin, on his birthday.

In between, he had done enough to become known as “Father of the Scottish Enlightenment” and, later, to be also accredited with paternity of Irish republicanism, 1790s-style.

But it was his effect on American independence that may have been most important. Thomas Jefferson debated his ideas. John Adams read him avidly. Benjamin Franklin hailed him as “the ingenious Mr Hutcheson”.

Another admirer, Scottish economist Adam Smith, said he had been “the most acute, the most distinct, and the most philosophical of all my teachers” and called him the “never-to-be-forgotten Hutcheson”. Yet forgotten he has been, by all but a dedicated few. Circumstances have conspired even to rob him of the memorial most famous dead can claim: a known resting place.

Before his premature demise in 1746, after years of teaching in Scotland, Hutcheson returned to the city he loved, Dublin, where he had done his best work. He is presumed to have been buried in the churchyard of St Mary’s, near Henry Street. But the cemetery has since made way for a public square, with the headstones displayed around its edges.

The church, meanwhile, was deconsecrated some years ago, and after a period as a home decoration store, became a bar. To the eternal outrage of any puritanical members of the congregation (if not to Arthur Guinness, who was married there), the bar is called The Church.

One other irony is that the former churchyard is now Wolfe Tone Square. But that, at least, may be apt, because Hutcheson’s ideas were central to the founding of the United Irishmen, 45 years after his death.

Alas, the ideals he espoused–- liberalism, tolerance, and “the greatest happiness for the greatest numbers” – became crushed in the country of his birth between two opposing monoliths: Catholic nationalism and Protestant unionism.

In the meantime, his ideas were triumphing farther afield, especially in Britain’s North American colonies. His argument for the “natural equality of all men” seems obvious now, but it had been radical in the early 1700s. Ahead of anyone else, he also pursued its logic into opposing any kind of slavery, dismissing the then common apologia that Africans were better off as slaves in the west than as free people in their native lands.

It was strange, he wrote, “that in any nation where a sense of liberty prevails, where the Christian religion is professed, custom and high prospects of gain can so stupefy the consciences of men, and all sense of natural justice, that they can hear such computations made about the value of their fellow men, and their liberty, without abhorrence and indignation.”

I mentioned earlier a dedicated few who keep the memory of this heroically humane man alive in Ireland.   These include Philip Orr, a teacher and historian in Co Down, to whose account of Hutcheson’s life I’m indebted.

They also include Owen Morton who wrote to me on the subject last year. And above all, they include the man from whom Morton first heard of Hutcheson, Fergus Whelan, who wrote an “inspirational” book on the philosopher, Dissent into Treason, and has also been responsible for putting Hutcheson’s name back on the map of his adopted city.

A few years ago, Whelan arranged to have a plaque erected in his honour near the former St Mary’s. Among those there to see it unveiled were a group of ex-prisoners (both republican and loyalist) from Belfast.

For some reason this reminds me of a comment Hutcheson once made to Thomas Drennan, father of the United Irishmen leader William, while teaching in Glasgow. He was lamenting the behaviour of his Irish students, who despised everything in Scotland and, despite being Ulster Presbyterians, were known as “wild Irish teagues” to the locals. In particular, Hutcheson complained of their tendency to enjoy the “silly manliness of taverns”.

Would the philosopher be disappointed that his last resting place is now a bar? Well, on the one hand, his belief in pursuit of happiness was more about achievement of human potential than a licence for hedonism. On the other hand, he was no puritan. Were he alive today, in keeping with his general tolerance, he would probably agree with the slogan that, if you must, you should enjoy alcohol sensibly.

1 Gardaí suspect botched murder attempt was bid to avenge Mulready-Woods death
2 Who are Ireland’s 17 billionaires?
3 Election 2020: FF edges ahead of FG as SF surges in new Ipsos MRBI poll
4 Rob Delaney: ‘As my career took off, my son got sick ... And then he died’
5 Fintan O'Toole: Safety-first politics has had its day
Real news has value SUBSCRIBE