How do I explain Ireland to people who’ve never heard of it? 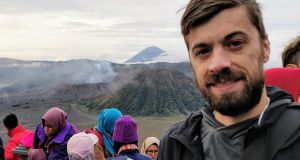 Barry Dunning, originally from Co Kildare, has worked in Jakarta since 2017.

When you stand out in a foreign land - like a country man from Kildare always will in a tropical country like Indonesia - “where are you from?” is a question you quickly get used to answering. Unlike in Europe, America or Australia - where we have a shared history based on immigration, geography or economics - many people in Asia (home to 60 per cent of the world’s population) have never heard of our wee little island in the Atlantic. So the challenge is to find some cultural or economic export from the Emerald Isle that a local Bapak or Ibu (man or women) will have heard of.

Talking about St Patrick and the snakes, shamrocks or leprechauns doesn’t cut much ice.

You can try mentioning Guinness, but most people here (in Indonesia anyway) don’t drink, and if they do it’s likely to be the local moonshine, not the imported and therefore very expensive Guinness.

The ongoing shambles of Brexit has certainly given Ireland more global exposure, but it’s hard enough explaining the backstop or a hard Border in Ireland or Europe, let alone half way around the world and (often) in another language. Our reputation as one of the world’s top tax “planning” destinations for mega tech companies? Again, not one you’d be keen to get into every single day.

Long gone are the days where you could just trot out the names of Roy or Robbie Keane and get instant recognition. Mentioning Conor McGregor might get you a bit further, but that just invites more questions than it’s worth.

So a lot of strikeouts right there. Sometimes it’s tempting to go with the easy answer of saying I’m from Australia (I’m a dual-citizen) as everyone has heard of Australia, but that just seems like a cop-out (and invites its own difficult questions).

Having now answered the “where are you from?” question hundreds of times, I have, however, stumbled onto an (almost) foolproof answer, at least to anyone who was around at the turn of the millennium and it involves questionable 1990s and early 2000s Irish pop music.

We’re talking Boyzone and the Corrs, but most especially we’re talking the big daddy of that scene here in Indonesia, and across southeast Asia – Westlife.

In my almost two years here, I’ve been blown away by how popular these bands still are, and how they are one of the only things people associate with Ireland. Their music, which in Ireland is either tinged with nostalgia for people seeking to relive their youth, or as a source of embarrassment, is still taken extremely seriously here.

We are talking the most grizzled taxi drivers you’ve ever sat in a car with - the kind who would have Liveline cranked to the max back home - humming along to Flying Without Wings.

It’s the barista singing along to every word of a Seasons in the Sun as he takes 10 minutes to perfect your coffee art.

It’s the hipster barber, with tattoos on his neck, who mentions Westlife as soon as you say Ireland - before quickly adding a “My girlfriend is into them. I’m more into Guns and Roses”.

It’s the teachers, the chemical company executives and the World Bank analysts, who tell me they first learned English by studying the (profound) lyrics on the Westlife cassette album inserts.

The bands themselves are well aware of this and have been cashing in for years. Boyzone sold out a 5,000 seat venue in Jakarta in March. Westlife’s concert this week, at a 10,000 seat stadium, sold out in two hours and they have now added another show.

And the prices are not cheap - with the high-end tickets clocking in at north of €150 euros. Heck, even Brian McFadden might be able to sell out a concert here.

Fair play to the bands of course, but I’m more interested in why these bands remain popular here when none of other Ireland’s other major cultural exports seems to have much traction here.

Many explanations I’ve been given note that this music was the first taste of the West many Indonesians had exposure to after three decades of authoritarian rule ended in 1998. In those pre-Spotify /YouTube days, choice was limited especially when it came to international music, so the few tapes that existed were passed around and played repeatedly. The lyrics are inoffensive and unlikely to fall foul of even the most zealous censor. And today, the songs are still played relentlessly on easy listening stations.

Whatever the reason, Westlife, and to a lesser extent Boyzone and the Corrs, have stood the test of time here in Indonesia and across southeast Asia. More than 20 years later they are still the major cultural touchstone that many people have to our Emerald Isle. Who knows maybe Fontaines DC or someone else will go global, or McGregor will cop himself on, and I’ll have more options to point to. For now, however, I’ll stick to humming Swear it Again and Flying Without Wings with taxi drivers and baristas, and neglecting to highlight that Uptown Girl and Seasons in the Sun are both (significantly inferior) covers.

Barry Dunning is a Kildare man working in Jakarta since 2017 for an Indonesian Children’s NGO. He tweets @barrydunning1