‘For a time I felt Ireland was a narrow, Catholic, little dump. I feel less angry now’

From the archive: What did returning emigrants make of Ireland in 1989? 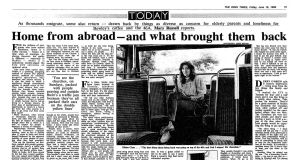 Mary Rusell began: ‘For the millions of emigrants who have settled elsewhere, home is a Celtic nirvana – frozen in a time warp of nostalgia.’

In recent years, The Irish Times created the Abroad network, a project which emerged from Ciara Kenny’s work, a renewed cycle of emigration from Ireland, and an increasingly connected diaspora who were keen to keep up with news at home, as well as maintaining links by expressing their opinions and discussing their experiences abroad.

Coupled with Sorcha Pollak’s New to the Parish project, both of these aspects of the Irish Times detail the two-way system of migration to and from this island.

Writing about returning emigrants may seem like a contemporary topic, and it’s one that became especially amplified during the Celtic Tiger, as people who left Ireland during the 1970s and 1980s returned to a more prosperous land, and more recently as the recession eased. But people coming home was also a topic of journalism in the newspaper in the 1980s.

In June 1989, Mary Russell reported on the phenomenon of Irish emigrants returning to Ireland. The article painted a rather dark picture of Dublin at that time, and discovered the stories of people who were gradually making their way back home.

“For the millions of emigrants who have settled elsewhere,” Russell began her piece, “home is a Celtic nirvana – frozen in a time warp of nostalgia. As always, however, the reality is different – especially in Dublin – where it is seductively double-edged: Sin City with salvation an optional extra.”

Dublin was, as Russell described it, like many other capital cities, “a sparkling, energising cocktail of mental and physical activity, polluted by criminals, property speculators, bag-snatchers and bicycle thieves.”

That wasn’t the only irritant for returning Irish folk. “It seemed really strange to see a nun standing at a bus stop,” one social worker who had come back to Ireland from London told Russell, “You just don’t see them like that in London but here the Church seems to be everywhere. That was when I first came back, mind you. I’ve since learned to accommodate all that and now I can distinguish between the different elements of the Church. I discovered there were lots of feminist nuns, for instance.”

A woman who had returned from Holland after spending four years there described being “horrified by the vigour of the religious campaign over an issue such as the divorce referendum [IN 1986].” Another woman, Noreen Lloyd from Galway who had spent 25 years on an Indian tea plantation found it hard not to refer to India as her home, “I remember being back on holidays here and saying something about going home to India and my mother corrected me - ‘You are home,’ she said. She was quite annoyed.”

Returning emigrants often quickly realise that the things they didn’t like about Ireland come to the surface almost immediately upon setting foot back on the island.

Russell detailed some of the things that she found annoyed the returning diaspora about Ireland, “the middle-class aping of British ways, with vowels being forced into a vocal strait-jacket; the slavish adherence to the status quo; the insularity and apathy; the emotional demands of the family; the assumption that the poor are lazy and the rich are rich because they work hard. And Ireland is still monotonously mono-coloured and mono-cultured with few, family-run Asian cafes, no Caribbean clubs and no African jazz - and people still asking you for your Christian name.”

But what did people miss about Ireland back in the late 1980s? Bewleys coffee, conversation, a mother’s cooking, chocolate, walking down Grafton Street, the top of the 46A bus, the sea, brown bread and a good cup of tea, and rugby matches at Landsdowne Road, were all cited in the article.

The writer Evelyn Conlon reflected on how she felt attitudes towards women were changing in Ireland upon her return from Australia and Asia, “For a time I felt Ireland was a narrow, Catholic, little dump. I feel less angry now . . . The great thing about here is the level of awareness among Irish women, far higher than anywhere else – for all the good it does them. I suppose attitudes to women are changing.

“I was looking at a bank advertisement the other day and it showed a young woman signing a cheque and she’s written Ms – and that was the bank and I thought, well, haven’t we come a long way . . . ”