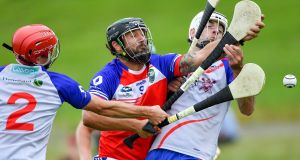 The sun has been (mostly) shining for the more than 1,000 people who have travelled from around the world to play in this year’s GAA World Games in Ireland this week. We’ve followed the action as more than 80 teams battled it out in hurling, camogie and football games ahead of the finals in Croke Park in Dublin today. Best of luck to everyone involved. We also had a look back at how Irish immigrants first shared their GAA sporting passions and skills globally.

In the US, Irishman Keith Byrne was released from prison following a court ruling and reunited with his family. However, he still faces deportation proceedings. Byrne was imprisoned as part of Donald Trump’s crackdown on illegal immigration last month. In Brexit news, the UK is currently engaged in a stand-off with Dublin and Brussels over the withdrawal agreement that would secure the UK’s orderly exit from the EU. An English journalist, who has lived in Ireland for many years, has written an opinion piece in an Eurosceptic newspaper that Taoiseach Leo Varadkar and Minister for Foreign Affairs Simon Coveney are “uncertain fools” acting like “wilful children” in the destruction of Anglo-Irish relations. We will keep you updated.

In something completely different one of our most popular articles this week was about unusual wedding traditions around the world: "They cut the groom’s socks off”. Irish Times Abroad readers shared some strange, funny and wonderful stories about weddings overseas. Dr Diarmuid McCoy, originally from Bantry, Co Cork and now living in Geelong, Australia, has written about working as a Specialist Pain Medicine Physician. He also says what he misses most about Ireland are the sunsets over Bantry Bay, brown bread and sharp Irish wit.

Also popular this week was a story from Gavin Brennan, who is a writer from Claremorris, Co Mayo, on life in Hanoi working as a teacher. And an article about justice being sought for Irishman Albert Black who was hanged in New Zealand for killing a man in apparent self-defence in 1955.