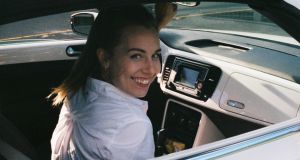 Sarah-Kate Fenelon, who is originally from Enniskerry, Co Wicklow, but now lives in Los Angeles where she works as a film producer

Film producer Sarah-Kate Fenelon, who is originally from Enniskerry, Co Wicklow, now lives in Los Angeles where she works for author and showrunner Neil Gaiman in Hollywood

I’ve been living in the United State for four years. I spent three years in New York while I did my master’s in film producing at Columbia University. For the past year, I have been in LA working in the film industry pursuing “the dream” - so to speak. I have been interested in film from a young age. My parents called me a TV addict long before the golden age of TV made that a badge of honour, but I never planned on going to film school. The reason I originally applied was just to validate my passion in some way. I wanted a panel of judges to assess whether they saw any potential in me and to get a piece of paper that would show people I could do it and  it wasn’t s a fool’s errand - that the dream was maybe possible. Looking back now, the past four years have been a whirlwind and the 12 year-old me, who was raised by the characters in TV shows Charmed and Friends, would pinch herself. I return to these shows years later as a source of comfort many thousands of miles away as they remind me of home.

I studied English and drama at Trinity College Dublin and, looking back, credit it and the sheer amount of material we needed to read on our syllabus for my thorough understanding of story today. It’s the foundation I stand on as a producer and has been incredibly useful.

Tell us about your career in Los Angeles. What does a film producer do?

When I told my parents that I thought I might make a good film producer their first question was, like 99 per cent of people, "What is a producer? Why didn’t I want to be a director" because they’d heard of those. I’m not sure people actually understand how things get made, nor the sheer amount of people (an army) involved or the coordination involved. Think a $15 million wedding that takes place over multiple locations with hundreds of guests ... actually think of a $150 million wedding to produce the product that they consume in one "Netflix and Chill" session - it takes as much work. If the director is the architect of the film, the producer is the engineer, manager, accountant and HR all in one. The producers literally organise and coordinate the film elements that have been curated by the director and from that point of view, can make or break a production. They can also can have a huge creative say, and in Hollywood at least, it is the executive producers who decide what gets made.

What are you working on now?

Today I work in TV. I work for the brilliant Neil Gaiman (Coraline, Sandman, American Gods) at his production company The Blank Corporation in LA. Most recently he show ran (wrote and produced) Good Omens for Amazon and the BBC, a book he originally authored with Terry Pratchett many years ago. This was adapted into six one-hour episodes of television. In May, we premiered the series at the Odeon in Leicester Square in London. I arrange and manage Neil’s business and travel schedule, and assist his development executives with Blank Corp’s current slate of projects.

What have you worked on?

Aside from my most recent credit on the Good Omens series, many of my own films are out on the festival circuit around the world. A feature documentary Talking About Adultery, which I assistant produced, premiered at the Sheffield Doc Fest recently. A film I produced in Colombia, Bajo el Agua, which follows a high school competitive swimmer dealing with her father’s terminal cancer, premiered at Bogota Film Festival in Colombia and recently screened at the Colombia-NY Film Festival in New York. A short I co-produced in South Africa called Our Albertinia, which explores the female experience or more specifically domestic experience of women in South Africa during apartheid in the 1960s. It recently premiered in Europe at at the Afrika Film Festival in Leuven, Belgium and in the US at the Harlem Film Festival in New York. It is set to screen at Durban Film Festival later this year. Needless to say, I like international films and have had the opportunity to collaborate with people around the world from Iceland to Morocco to The Hamptons. I credit my "Irishness" for turning me into this international producer, how we seem to look out at the world and simultaneously punch above our weight as a country.

I think the Irish, generally speaking, have qualities that make us easy to get along with abroad and we become chameleons in a way. Our sense of humour for one, the best self-deprecating kind, and our love of the arts, knowledge of the outside world and work ethic to name but a few, and we can of course talk the hind legs off a donkey. We are social animals who thrive in conversation and this can come in very handy in the film industry, and any industry I’m sure. Networking is the holy grail in LA, it can open new doors faster than you can say "hired" so being good at conversation is a huge advantage.

Having lived in New York previous to this, I find LA has a much healthier way of life. People out here, while being as ambitious and hard working, also have perspective on other things that can add value such as going for a hike, picnic or to the beach with friends. The pace of life seems a bit slower, allowing people time to breathe without having to constantly look over their shoulder. I find LA has a better work-life balance and aside from the traffic, which at times can be quite extraordinary, it can be a lovely place to live if you find your tribe.

The Irish community in LA has been very welcoming since I moved out here. I was lucky to have moved in around the time of Ireland Week run by Screen Ireland, which organised panels and events for people within the industry to connect. It was a great resource that threw me head first into the industry out here and has introduced me to people I probably wouldn’t have crossed paths with otherwise.

The eight-hour time difference can be hard on your relationships at home and it takes a conscious effort to make sure you stay in touch. I miss our nature, the butter, our sensibility and the sausages. But for now LA offers me more opportunities for my career and Ireland will be there when I come home. In an ideal world I would, and will able to, combine my networks and work bi-coastal in the future.