Call it populism, call it tribalism - whatever it is, Johnson commands fierce loyalty 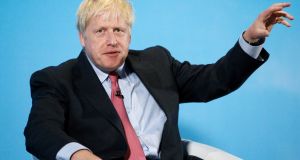 ‘Swap a hurl for a cricket bat, the word “Brussels” for “Dublin”, and Boris Johnson would be right at home in a back bar in south Kerry, waging a derisory finger at “them up in Dublin” with one hand and knocking back a pint with the other.’ Photograph: Henry Nicholls/Reuters

“I’ve seen it over the years, the more intellectual they are, the more work they don’t want to do.”

It reads like a Brexit rallying-cry, like when Michael Gove said Britain had “had enough of experts”. These miserable know it all’s would keep Britain trapped in its loveless marriage with Europe indefinitely, while no-nonsense grafters like him would roll-up their sleeves and find a way to make Brexit work.

In fact, the quote belongs to former taoiseach Bertie Ahern. He was speaking in a 2015 RTÉ documentary about Brian Lenihan, and took the opportunity to take a swipe at Lenihan and the malign influence of other perceived “intellectuals” in the Fianna Fáil party. In the party of DeValera and the Republic he founded, being smart was to be regarded with suspicion. “Don’t be smart now, you”.

But to be cute, that is a trait to be admired in a man. While times have gradually begun to change in Ireland, in Britain it seems that our old overlord is beginning to ape its former subjects. In Boris Johnson, Britain is on the cusp of electing its first cute hoor prime minister.

Johnson was educated at Eton and then Cambridge, but these are merely aesthetics. Swap a hurl for a cricket bat, the word “Brussels” for “Dublin”, and Johnson would be right at home in a back bar in south Kerry, waging a derisory finger at “them up in Dublin” with one hand and knocking back a pint with the other. Their electorate is the same - tired of being condescended to by elites in a remote city, they respond well to a sly dog who they reckon can get them a good deal.

The fact that Johnson is a thundering embarrassment to Britain is not relevant. The likelihood that a hard Brexit would be a calamity for the broader British public is also not important to the narrow sect of society whom he represents. Ensure that the interests of one’s tribe are represented, and a politician need not worry what anyone else thinks.

There are a depressing number of examples of this in Ireland - the people of Tipperary have re-elected Michael Lowry with such vigour and on so many occasions, it’s almost as if they vote for him not in spite of his conduct as a minister, but because of it.

Michael Healy Rae drew national revulsion when he advocated a scaling-back of drink driving laws - in a country devastated by road traffic accidents - but the people of Kerry re-elected him with enthusiasm in 2016, and gave a seat to his brother for good measure too.

Mick Wallace looked like he might resign in 2012 when his tax evasion came to light, before telling the Dáil “I am answerable to the people of Wexford who elected me, and they will discard me when they see fit”.

Call it populism, call it tribalism - whatever it is, Johnson too commands fierce loyalty from those who identify with his message - Tory diehards, hard Brexiteers, model bus enthusiasts - and near universal disgust from those who do not - liberals, business people, the young, the Scottish, his neighbours.

“Sitting on the sidelines, cribbing and moaning is a lost opportunity. I don’t know how people who engage in that don’t commit suicide.” That’s Ahern again - then speaking as leader of a nation with one of the highest suicide rates in the world - when talking about critics of his approach to fiscal policy one year before the crash. It was much easier for Ahern to dismiss concerned citizens as depressives and layabouts than reflect on the possibility that he and his government were driving the country towards a socio-economic Year Zero.

Similarly, the Bank of England’s Mark Carney is blue in the face trying to warn the public about the dire consequences of a disorderly Brexit, and the Tories have been equally busy screaming at him to keep his mouth shut (though they have stopped short of suggesting that he kill himself). Their take-downs have ranged from absurdist to plain denial - Gove has likened Carney to the Chinese Emperor Ming while Johnson recently stated in an LBC interview that Britain’s most senior economist was simply “wrong”.

The deliverance of Brexit is an act of patriotic duty - not to mention an act of enormous personal gain for men like Johnson - and should not be bogged down by snooty dorks polluting the debate with things like reason and data.

In Ireland, anti-intellectualism in office finally reached its natural conclusion in 2008 - international humiliation, mass emigration, and hardship felt disproportionality by the poor and the young. In Britain, the result will surely be the same - while the road-signs that lead to the Brexit disaster sit in plain sight, they are being wilfully ignored by the cute hoors elbowing their way to the driver’s seat.

Are the British really as xenophobic as they’ve been made out to be since Brexit?
Trying to make Brexit funny when it’s no laughing matter
‘I’m exhausted explaining to British people the geography of their own country’
We’re often the butt of the joke in Britain but we have it much easier than others
We’re entitled to stay in Britain after Brexit, but we could be better off at home