Trying to make Brexit funny when it’s no laughing matter

My comedy routine went down so well in London, but in Essex it was a different story 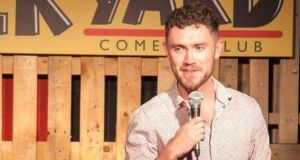 Peter Flanagan: ‘I generally find being Irish an advantage performing stand-up in the UK; for better or worse, English people have been conditioned to laugh at the Irish accent.’

“Ireland has ruined Brexit, sorry about that.” My routine about Brexit and Ireland’s role in it had been going down so well in central London, but on a chilly Thursday evening in Essex, I was being greeted with folded arms.

Living in the capital, you could be forgiven for thinking no one wanted Brexit at all. People here are broadly so against it that it’s as though the referendum took place in another country entirely, ratified by a population of philistines who spend their days hunting oxen, drawing pictures of the queen on cave walls, and reading the Daily Mail.

These wretched people are regarded with a mixture of contempt and condescension - loathed for what they’ve voted for, pitied for their ignorance of the essential goodness of things like EU membership and smashed avocados.

Until now I’d only ever talked about these people in the abstract, but I can now confirm that Brexit voters do not in fact live in hunter gatherer communities thousands of miles from the city walls. In fact, take a short train ride to from London’s Liverpool Street and you can find yourself deep in the heart of Brexit Land, surrounded by normal people without a single spear (or almond latte) between them.

I was performing in a packed football club and my Brexit material wasn’t landing. Worse, I was getting a sense that it wasn’t just that the 200 plus people in attendance didn’t find me funny - they fundamentally disagreed with what I was saying.

Suddenly, I was confronted with a reality that it is all too easy to ignore when discussing second referendums and campaign funding allegations: that a majority of English people voted to leave the European Union, and they’re not happy with how it’s going.

They certainly weren’t interested in listening to a comedian from Ireland - whose Government’s insistence on a border backstop has been the principal stumbling block in securing a deal so far - poke fun at them about it.

I generally find being Irish an advantage performing stand-up in the UK; for better or worse, English people have been conditioned to laugh at the Irish accent. From Terry Wogan to Dara O’Briain, we’ve done a good job rebranding ourselves from beardy terrorists from a disloyal backwater, to wholesome light entertainers.

I’ve even heard it said that Irish people are loved in the UK, and abroad more generally. But in reality it’s a conditional love, hinging on us being jovial, non-threatening, and most importantly, conciliatory.

This is the acceptable face of Ireland, the one that signed over fiscal sovereignty to the EU and accepted the grossly unfair terms of the bailout without any fuss. Think of a cross between former taoiseach Enda Kenny and Gerard Butler’s character in PS I Love You, and you’ve basically got the template for the ideal Irish person for many people.

The unacceptable face of Ireland meanwhile might be characterised as Leo Varadkar in the Brexit negotiations; assertive and high status, Varadkar was inevitably called everything from a fool to an IRA sympathiser in the British tabloid press.

The great irony is that the characteristic the English have always found most threatening about Irish people - the almost obsessive insistence on self-determination - is the very trait they’ve grown to embody themselves.

More recently we’ve seen the emergence of the Independent Group - not to be confused with the UK Independence Party - who despite their name, don’t appear to want to be independent from anything. Through Brexit, Britain has come to embody the very thing it used to find so peculiar about Ireland.

Moreover, the confusion in Westminster presents a problem more fundamental to negotiations than the border backstop: how can Britain secure freedom from the EU, if it cannot agree itself on what freedom looks like?

As badly as the withdrawal negotiations are going, my performance in the football club that evening was going much worse. If I am right about there being an acceptable face of Ireland, I definitely was not it.

Finally, one punter had enough - boozed up and indignant, he began to shout incoherently until security dragged him outside. As I stood onstage and watched the man getting ejected, the full absurdity of the situation revealed itself to me - through being forcibly removed from the venue when he clearly wanted to stay, only now did he know how Londoners feel about leaving the EU.

We’re entitled to stay in Britain after Brexit, but we could be better off at home