Irish nationalist links to the rise of baseball in America 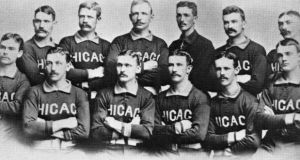 One of sport’s most renowned rivalries was on display for the first time on this side of the Atlantic last weekend, as the Boston Red Sox and New York Yankees met in London Stadium. Although the meeting of the two clubs marked the first regular season Major League Baseball (MLB) games on European soil, the sport has a strong history in Europe.

Connections between Ireland and baseball are strong, as is evidenced by the presence of an “Irish-American Baseball Hall of Fame” in New York City, and the success of the Irish Baseball and Softball Federation (IBSF) since its founding in 1989.

As baseball began to emerge as America’s “national pastime”, it gained a strong following particularly among Irish nationalists. This is perhaps not surprising, as the rise of the sport coincided with the mass exodus of Irish emigrants to America during the Famine years of 1845-52.

It is tough to decipher the exact beginnings of baseball in the United States, as references to “Base Ball” appear as early as the late 18th century. Allusions to the game continued to appear throughout the 19th century. Though it wasn’t until the 1860s and 1870s that baseball fully came into its own, spurred on by American nationalism and the ideals of muscular Christianity, which stressed the link between team sports to mental and physical well-being.

In the summer of 1867, one Irish emigrant who had settled in Minneapolis wrote to an Irish news editor that in order to ensure young Irish-American men were ready for the “coming struggle”, they should establish “a Fenian Base Ball Club in every City”. This vision for a Fenian takeover of the sport was never realised. But a number of clubs with Irish revolutionary membership did spring up across the United States, which continued to play until the late 1870s.

Only months after Fenian raids on Canada gripped global headlines in 1866, Irish interest in the game nearly sparked another international incident. Canadian police along the border were bewildered when they came across a shipment of baseball bats bound for young Fenians located in the American west. On opening the crates, the guards wondered whether they had stumbled upon a shipment of “shillalahs or wooden legs in the rough”, before ultimately deciding that they’d found “some new and formidable Fenian implement of war”.

The demise of the Fenian movement didn’t mark the end of Irish nationalist involvement with the game. At the height of the Gaelic Cultural Revival, fears of the “Americanisation of Ireland” were raised when plans arose to introduce baseball as a potential “pastime to help the [young athletes of the country] to cultivate their muscles and stamina during the summer months”.

Baseball was seen as a potential Irish nationalist tool to dull the lingering influence of cricket, a sport enjoyed by “the garrison element in Ireland”. Similar concerns had once been raised about English games in the US, with one paper concluding that ultimately, baseball had “won the war”, and stamped out the influence of English games there.

Wealthy Irish-American businessman Richard Burke, who had relocated from San Francisco to Nenagh, was at the fore in pitching baseball as a way of driving out “foreign games” like cricket. He remarked in 1906, “If we revive the old Irish game of rounders in Ireland in its modern form...In a short time we would see as little cricket in Ireland as in America. If it is taken up enthusiastically by the young men of the country...in a few years we shall see the champion baseball nine of Ireland challenging the United States for the championship of the world.”

While Burke’s vision has not come to fruition (yet), his efforts were met with some short-term success. A 1907 telegraph from Dublin to a paper in the US boasted how “base ball is crowding the Sassanach [SIC]game of cricket out of Ireland”, adding that “it has gained a firm foothold in the provinces which have little use for England”. The report concluded that “Base ball must have been Ireland’s national game [AT]one time.” An accompanying short ditty illustrated the prevalence of Irish surnames amongst the ranks of professional baseball players in the US at the time:

The Flannigans and the Branigans, the Caseys and the Flynns,

The McIntyres, McFaddens, McGinnitys and Quinns.

The Sullivans and the Dalys, the Hogans, and the Burkes.

We could name a raft of Os and Macs, but maybe that’ll do.

They were playin’ ball in Ireland in the days of Brian Boru.

Whatever headway baseball had made in Ireland by the turn of the 20th century appears to have dissipated after the establishment of the Irish Free State; reflecting a shift to Gaelic games. When Limerick man JJ Hanley returned to Ireland in 1929 after making a fortune in the US, he expressed his surprise and disappointment that baseball had lost its footing in Ireland. When a sports writer in Cork claimed the rise of baseball would be detrimental to Gaelic games, Hanley stressed that he was no enemy of Ireland’s traditional sports.

As a “propaganda feature for Ireland”, the barnstorming tours of the US undertaken by the GAA were “not a success”, he said, as most Americans were unfamiliar with Gaelic games. He concluded that “If a baseball team was sent over from this country the American people who are now out of touch with Ireland and its affairs, would become interested in this country. Baseball...would do much to further Ireland’s interests.”

Despite Hanley’s advice, and the formation of an “Irish Baseball Union”’ in 1933, it was reported later that year that the game was “practically unknown” throughout the country. As the MLB once again tries to expand its market in Europe, it will be interesting to see how its efforts are met in Ireland. Last season, the New York Mets made history when pitcher PJ Conlon, from the Falls Road in Belfast, took the mound as the first Irish-born player since 1945 to appear in an MLB game.

Who knows, by the next time the Red Sox and Yankees return to this side of the Atlantic, maybe we’ll see an Irish-born player or two in their midst.