An Irishman’s Diary: Celtic scholar praised for his work on old Irish poems and sagas 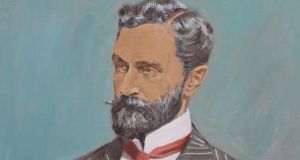 Kuno Meyer complained that Germany had done nothing to manifest its sympathy with Irish separatism since the comradeship in arms inaugurated in 1916 at the instigation of Roger Casement above). Image: Detail from Mick O’Dea’s portrait of Roger Casement (Photograph: Nick Bradshaw)

On St Patrick’s Day, 1918, the German-Irish Society in Berlin gave a reception which was attended, according to newspaper reports, by a numerous gathering.

Most of those present, including the co-founder, the Celtic scholar Kuno Meyer, were German nationals, but the gathering also included at least two Irishmen, the other co-founder George Chatterton-Hill, who was born in India to an Irish father and had never been to Ireland, and Joseph Dowling, a soldier in the Connaught Rangers who had joined Roger Casement’s Irish Brigade while a prisoner of war.

They were addressed by the director of the foreign office, Wilhelm von Strumm, who assured them that the government took a lively interest in the fate of Ireland and its fight for self-determination. The society then sent a telegram to the Kaiser offering their most earnest devotion and expressing the hope that “the mighty German sword, having completed the liberation of the oppressed people of the East, would cleave asunder the chains which England had forged around Ireland”.

Dowling was sent to Ireland on board a U-Boat with a mission to set up channels for the smuggling of weapons from Germany and was promptly arrested after coming ashore in Co Clare, on April 12th.

Meanwhile, Meyer complained that Germany had done nothing to manifest its sympathy with Irish separatism since the comradeship in arms inaugurated in 1916 at the instigation of Roger Casement. In a lecture in Cologne he said that Germany owed Ireland gratitude because Irish hostility had detained armies in Ireland and Britain which could otherwise have been sent to the continent.

But as Germany’s hopes of victory receded, her interest in an Irish revolution died and Meyer, who had become professor of Celtic philology in the University of Berlin, concentrated on his academic work.

Before the war, he had been a respected academic in the United Kingdom, recognised by his peers as the greatest living authority on Old Irish language and literature, the founder of the school of Irish learning and its journal Ériu, a professor of teutonic languages and, later, honorary professor of Celtic studies at Liverpool, a visiting professor of Celtic studies at the Royal Irish Academy, a Freeman of Dublin and Cork and a doctor of the Universities of Oxford, Wales and St Andrews.

In April 1912, when he was being conferred with the Freedom of Dublin, he said that Irish people were the heirs of a great and unique literature, a national possession and a rich heritage of memories of which they should be proud.

Resuscitating that literature and bringing it before the Irish people was a labour of love and he promised to devote the remainder of his life to the task. He added, as a humorous aside, that perhaps his interest in Ireland was due to the fact that his grandfather had met Napper Tandy when the old rebel was in exile in Hamburg.

After the war, any return to the UK was impossible but he continued his research and sent what would be his last work to the printer

When the war started in August 1914, he could have continued to work quietly in Berlin. Instead, he travelled to the United States and, while he delivered occasional academic lectures there, his energies were mainly devoted to stirring up anti-British feeling among Irish-Americans.

Shortly after arriving, he co-operated with Sir Roger Casement, who was also in America, in the production and translation of a pamphlet proposing an alliance between Germany and Ireland.

At a meeting of Clan-na-Gael, in Brooklyn on December 6th, he hinted that an Irish Brigade was being formed by Casement from among prisoners of war to fight for Germany and he promised that “when Germany obtains the great objects for which she fights, the nations that now bear the yoke of England will not be forgotten”.

Not surprisingly, he was excoriated by former colleagues for his ingratitude to the country that had given him a livelihood for 27 years, while the Corporations of Dublin and Cork rescinded the honours they had given him.

After the war, any return to the UK was impossible but he continued his research and sent what would be his last work, a dissertation on fragments of Old Irish poetry, to the printers on July 10th, 1919. He died, unexpectedly, in Leipzig, following an operation three months later.

In 1920, the two Corporations posthumously restored his name to their rolls of Freemen.

Thomas MacDonagh, a lecturer in UCD, who would later be executed for his role in the 1916 Rising, ranked Meyer with Eugene O’Curry, John O’Donovan, Whitley Stokes, Standish Hayes O’Grady and George Petrie as one of the great scholar-translators whose work on the old Irish poems and sagas added a “wealth of matter” to Irish literature.

Speaking in Chicago in 1915, Meyer said that he looked forward to a time when all the masterpieces of ancient Irish prose and poetry would be open to students in a series of volumes that might be found in the home of every Irishman and Irishwoman. It was an impossible notion then, but thanks to digitisation and the work of a number of academic institutions it is becoming a reality, albeit in a format that he could never have envisaged.