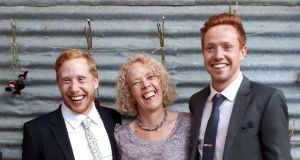 Marianne Hendron with her sons, Jack (left) and Cormac Rabl

Working Abroad Q&A: Marianne Hendron, who is originally from Portadown, is chief executive of a regional women's health service in Ballarat in Victoria, Australia.

I originally came to Melbourne in 1987 on a 12-month working holiday visa to escape the recession and for travel and adventure, but ended up finding a good job and meeting my Australian partner, Steve, within that year. I obtained permanent residency thanks to my job, and then we decided to start a family. I never saw myself staying in Australia.

We came back to Ireland in 1991 with a view to settling back here and had our second child in Dublin. It was hard though - the economy was still in recession, it was pre-Celtic Tiger, and Steve was finding it difficult to find regular work with the unemployment rate in the high teens. He was also pretty homesick. Added to that was the status of immigrants - Ireland was still in negative net immigration, and, while we were married, I as a woman could not bestow any citizen status on my spouse (it only applied the other way round then!) and he was being taxed at a very high rate. So we decided to come back to Australia late in 1992.

It was pretty heartbreaking to say farewell my parents who had been so supportive. At that time our boys were their only grandkids, and I thought that if we couldn’t be near my family we needed to be near his, so we moved to the very small country town, population 800, between Melbourne and Adelaide, where Steve’s parents and some of his siblings lived. We thought we might stay there for a year or so to get re-established, but it we ended up staying there for over 20 years. It was a lovely community for our boys to grow in and I was very much welcomed, but I missed home every day.

I did B Social Science at UCD and graduated in 1982. I’ve since done a Master’s in Social Work and two postgrad diplomas in Mental Health Science and Business Governance in Australia at Monash University and University of Melbourne, as well as lots of other certificates.

Tell us about your career.

I spent many years as a social worker in community development and managing community services in rural Victoria. Having qualifications made it relatively easy to find work and progress my career - rural areas have big skill shortages and people who can commit to longer term work are highly valued. I worked in housing support, social work, community aged care and then went on to manage multi-disciplinary teams in community health for several years. The Wimmera (region) where I lived, the Victorian ‘wheat belt’, is predominantly dryland agriculture - grains and pulses. People are very resilient, but I witnessed a lot of change and challenges - most young people leave the area for uni and don’t come back; farming practices are changing - the farms are massive, less commonly family owned and managed by large companies, many overseas based. It has lots of close knit and friendly communities, but there is also poverty and hardship. The 2000s experienced almost 10 years of drought, which was very challenging, followed by major bush fires and then floods, and I developed skills in emergency management and response - all community and health services in the region are expected to play a big part in those situations.

What does your day-to-day work involve now?

I’m CEO of a regional women’s health service. We have 14 staff spread over a large area and employ several casual staff, trainers and educators. We mainly work in health promotion, working with local government and other agencies on family violence prevention, reproductive health and gender equality. We do a lot of education and training, research and advocacy.

It ‘s a small service covering a very large area. We have to be smart to achieve success and some staff work in isolated areas. Partnerships are vital to our success, so I work hard to develop good relationships with lots of key influencing bodies. We receive government funding and I look for private and philanthropic funding and am developing a business arm through our training and development work.

It is interesting to respond to that question just after a federal election which saw a very depressing result for me. (For the first time since 2001 a Federal government in Australia led by Scott Morrison of the Liberal/National coalitionwon a third consecutive term in office). Coming here 27 years ago from an Ireland in recession, just after abortion referendum, I found Australia to be secular, multicultural, inclusive and progressive in terms of social justice, the environment, human rights, gender etc. I no longer think that. Australia seems liberal but individualism is massively on the rise - I find the government treatment of first nation people and refugees appalling and I see a massive growth in racism and a deeper rich/poor divide. Having said that, Victoria, where I live, is a relatively progressive state and doing well in areas like gender equality and aboriginal reconciliation.

Do your two sons consider themselves Australian?

My boys are Aussies, but very strongly connected to Ireland. Growing up we spent as much time as we could in Ireland, especially while my parents were alive. One of my brothers is a primary teacher and arranged for them to attend his school, so we had a couple of stints of several months at Ballyoran Primary where they developed their Portadown accents! They now travel there independently and have family connections and friendships independent of me. My younger son is currently on his second stint working in the UK. They both have Australian and Irish passports, but I am not sure what happens after Brexit! They also have a big wonderful and extensive Australian family. My in laws are fabulous and made me part of their family from day one.

Well I’m now 59 so the opportunities are diminishing! My dream is to be able to live for six months in each country. I would love to work in Ireland again in some capacity, but at least get to live there again part-time.

Yes for sure. Especially compared to migrants from Asia and Africa and other non English-speaking countries. There is a very entrenched hierarchy of migration here and Irish are pretty privileged in my view.

Ballarat is now my home. I really like it here. It is about an hour and 15 from Melbourne, the population is 100k and growing It is very gold rush historic and there is lots of Irish influence. It’s got that 10 minute city/neighbourhood potential, lots of parks, cycle tracks etc and good facilities and a vibrant arts and culture community.

Yes, I have Irish friends and some work colleagues. I love to connect from time to time, but probably less so than in early years. Every March I go to the Port Fairy Folk Festival which attracts lots of Irish acts and of course Irish living here. Its like a big reunion and we have big emotional seshs with Mary Coughlan, Damian Dempsey etc.

Lots! I miss my family and have missed out on so much of the lives and milestones of family and friends by living here. I do work hard to stay in touch with everyone and they are great that way too. I come home every year now, which is a luxury I suppose - it used to be every two or three years. My goal - buy a wee place and make it Airbnb. Fingers crossed!