'The Irish are well represented in theatre in New York' 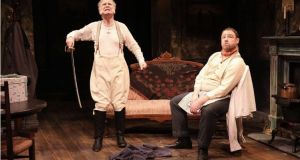 The Plough and The Stars ran at The Irish Repertory Theatre until June. Michael Mellamphy as Fluther Good (right) and Robert Langdon Lloyd as Uncle P (left). Photograph: Carol Rosegg

Working Abroad Q&A: Michael Mellamphy was born in Ballyfermot in Dublin and brought up in Ballincollig, Co Cork. He lives in New York, where he works as an actor.

I left on May 1st, 2000. Initially, the plan was to come to New York for a summer like so many others, have a bit of craic and get some work. I had very good friend here, Joe Darcy, who made the move here the year before. We had worked at Eamon Doran’s in Dublin’s Temple Bar while I was in drama school. I landed a bar tending gig at Ryan’s Daughter on Manhattan’s Upper East Side. This was a bar that I would go on to work at and eventually own. I’d fallen in love with NYC.

I studied performing arts at Inchicore Technical College in Dublin and at Coláiste Stiofáin Naofa in Cork. In truth, though, my theatre training began in school productions at Scoil Barra primary school and Coláiste Choilm secondary school in Ballincollig, Co Cork. The annual school musicals there fostered a love of theatre that initially led to the Cork Opera House. My grandmothers were very influential in my pursuit of my theatre ambitions. My Nana Kay Mellamphy in Cork would take me to “De Opera House”, while my Nanny Betty Whelan in Dublin would come to every show I did, whether it was Shakespeare or Synge.

Tell us about your career there

For many actors, bartending is just a fact of life. Acting isn’t the easiest profession to earn a living wage at. So that’s what I did - bartending and going to auditions. Initially,  a lot of the acting gigs were unpaid but I found the wider your circle gets, the wider your opportunities become. At first I was performing for the love of it in the basements of bars and restaurants as well as converted apartments, but I was meeting people with similar passions and expanding my circle.

Tell us about your acting life so far

In 2005, I had an audition at the renowned Irish Repertory Theatre for Brian Friel’s “Philadelphia, Here I Come” (a play I had performed while at Inchicore). I’d made it to the final call, but didn’t get cast. I made sure to go along to see it about three weeks into the run and afterwards bumped into Ciaran O’Reilly and Charlotte Moore. Ciaran directed the play and Charlotte was his producing partner. I thanked him for the opportunity and told him I’d be back for future auditions. The next day he called me to ask if I’d be interested in taking over a role as one of the other actors had to leave at short notice. That was the beginning of my professional career. I was now in Actors Equity and getting paid a weekly wage to perform.

How did you make ends meet?

I was still very involved in the pub and that took a priority over my theatre career, as bills and rent had to be paid. I remained involved in a number of productions each year including many memorable productions and performances with Origin Theatre Company’s “1st Irish Theatre Festival”. I even received a number of Best Actor nominations for productions in the festival and won it twice. I’ve appeared on some TV shows such as The Good Wife, Law and Order SVU and Quantico, and also performed as Sean MacGuire in the recent hit video game Red Dead Redemption 2.

A career in theatre is challenging - physically and mentally. You must learn quickly that a failed audition doesn’t mean you’re not good enough

I got out of the bar business in 2018 to concentrate on my acting career. I have a wonderfully supportive fiancé in Jessica DeLucia as well as a great network of friends and family.

Is New York a good place for actors?

New York is one of the most vibrant theatre communities in the world, and the Irish are well represented here. In June, I appeared in the Irish Repertory Theatre “O Casey Cycle” with its productions of Shadow of a Gunman, The Plough and the Stars, and Juno and The Paycock.

What attracted you to acting?

The day-to-day life of an actor is fantastic when you are rehearsing, performing and have a project that’s focusing your attention. I’m very lucky that since January 2018 it’s been this way. The Plough and the Stars is my eighth play since then, as well as the two TV spots and the release of Red Dead Redemption 2, which I worked on for about three years.

I travelled home to Ireland in 2011 to perform John Paul Murphy’s The Prophet of Monto, with Laoisa Sexton at the Axis Theatre in Ballymun. It was an absolute pleasure. Irish audiences listen actively. I think it’s down to our tradition of storytelling that makes Irish people very good listeners. I would love to return to work more in Ireland, but right now the best opportunities are here in New York for me.

A career in theatre is challenging - physically and mentally. You must learn quickly that a failed audition doesn’t mean you’re not good enough. It’s simply an experience that you can take forward to the next one.

Living and working in a theatrical Mecca like New York means that there are always plenty of opportunities around every corner even if you don’t always book the gig. It’s a wonderful city that helps keep you focused on your career.