Have your say: Should all Irish citizens abroad get a vote? 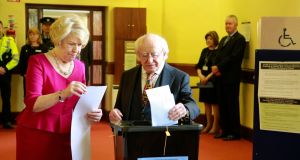 President Michael D Higgins and Sabina Higgins have cast their vote this morning at St Mary’s in the Phoenix Park. Photograph: Nick Bradshaw

It has been mulled over for many years but now a referendum looks set to go ahead this October on whether or not to extend the vote for President to the Irish diaspora. Details of the legislation circulated this week reveal that the Government is planning to ask voters if they agree with extending the vote for President to all Irish citizens living outside the State. This is distinct from other proposals considered, including extending it only to those who were born in Ireland, but now live elsewhere; or those who lived in Ireland, or perhaps only those with Irish passports.

Irish Times Abroad wants to hear your view on the issue, whether you are living in Ireland or abroad.What do you think of the proposal to allow all Irish citizens to have a vote, without any restrictions? If you live in the State, would you vote Yes or No in the referendum, and what are your reasons why? Do you think there are other proposals the Government should have considered? Do you think the result of this referendum could make a difference to who is elected as President of Ireland in the future? If you live abroad, what do you think?

You can share your views (max 200 words) and photographs using this form.

Have your say: Should all Irish citizens abroad have a vote for President?

A selection of contributions may be published on irishtimes.com.

If you are reading this in the Irish Times app, click here.

This, however, is highly unlikely and in countries where there are provisions for voting from abroad, the number of people who cast their ballot from abroad is relatively modest.