Irish people around the world share their stories on the heatwave, protests and the upcoming voting referendum 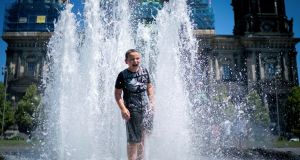 A boy cools down a fountain in Berlin, Germany during the heatwave. Photogtaph: Kay Nietfeld/dpa/AP

A lot has been happening with Irish abroad this week as a heatwave with recording-breaking temperatures hit much of Europe, more news on extending the right to vote for Irish emigrants, Hong Kong protests and the campaign to attract Irish nurses home being “stood down”.

Our top story today is from Marianne Hendron, who works for the regional women’s health service in Victoria, Australia writing about arriving in Melbourne in 1987 and the changes she’s noticed in life since.

This week the emigrant voting rights debate stepped up as details of the proposed legislation emerged. The Government is planning to ask voters in a referendum in October if they agree with extending the vote for President to all Irish citizens living outside the State. In Irish Times Abroad, Sinéad Fitzgerald, a member of the Votes for Irish Citizens Abroad campaign, shares why she will be advocating for a Yes vote: “Ireland also stands almost starkly alone in Europe in having no provision for overseas voting, when more than 30 of our neighbours include their citizens abroad in the democratic process,” she writes. We asked for your views, too, which we will be publishing in the coming days.

As temperatures in France soared to a record-breaking 45.9 degrees over the weekend, readers living and holidaying in Europe shared their sweltering stories on what it is like coping with the extreme heatwave. Seanán Ó Coistín, living in Luxembourg, said: “Without the air-conditioner, it is hell”, while Andrew Johnston in Dammbach in Germany wrote: “The heatwave is extreme and unusual”.

Irish Times Abroad readers shared their experiences of living in Hong Kong as the protests turned violent this week after police fired tear gas to disperse a crowd that had stormed the legislature on Monday, the 22nd anniversary of Britain’s handover of Hong Kong to China in 1997.

Also popular this week is Joseph Woods’ article about “What brought so many Irish people to live in Zimbabwe?”, and Enda O’Brien, a climate scientist from Co Wicklow, gives us an insight into his life in Jeddah: “As an Irishman, you can fit in to Saudi society up to a point.”