London Irish: Irish people are great at looking out for each other abroad 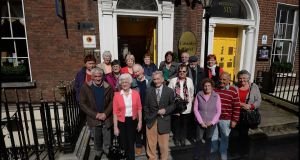 A group from the Irish Elderly Advice Network outside Cassidy’s Hotel in Parnell Square after arriving in Dublin for the Gathering in 2013. Photograph: Brenda Fitzsimons /The Irish Times

More than 130 members of the Irish community attended a funeral service in London on Tuesday for an elderly Irishman who died without no mourners. John Lynch, from Ballylongford, Co Kerry, died last month.

It has highlighted the issue of isolation among elderly Irish people in London.

Irish Elderly Advice Network (IEAN) was formed in 1993 to combat isolation, distress and poverty among the older Irish population in Britain. It was created after three Irish elders were found dead in their flats in Camden in London. Each died alone and lay undiscovered for several months. They had become isolated, in poor health, removed from friends, family and community and had no one to turn to for help. These tragedies shook the Irish community and a number of older Irish women came together and founded the Irish Elderly Advice Network to try and ensure this could never happen again.

Peter Benson, originally from Naas in Co Kildare, writes about his chance encounter that lead to him joining the group and why he thinks a network outside immediate family is important.

I moved to London from Naas, Co Kildare more than 35 years ago at a time of great prosperity in London and near absolute depression back in Ireland. I took the traditional route to London via Holyhead, and the long train ride to London’s Euston station. A route travelled by tens of thousands before me. Back then, and still now, Irish people were welcomed to Britain. Although Brexit has thrown a cloud, it will clear quicker than most think and this should not deter anybody moving to Britain now.

My two children are nearly adults now, with one flown the nest, and it’s been a time to reflect on what happens when they are both gone, and the parenting and taxi requests and noise cease. It’s so important to be meeting new people and developing new intergenerational networks and interests but, for some of us who may lack the confidence to seek new friendships, this is easier said than done.

Over a drink at a social occasion in the London Irish Cultural Centre in Hammersmith last summer I got talking to Sally Mulready, chief executive of the Irish Elderly Advice Network (IEAN), and I met Sally again, and members of her team, and many of the trustees when I attended the Network’s AGM and one of its big social events in February 2019.

Nearly half of the estimated 380,000 Irish people living in Britain are over the age of 65, according to the latest census. Many of them face social isolation as the new online ways of expanding their circle are alien to them.

It was a different story in the 1950s and 1960s when they were young and had just moved over. Work was plentiful and they joined a thriving Irish community with the local Catholic church and traditional Irish pubs at the core of it.

There was the famous, now closed, Irish dance hall in Cricklewood “The Galtymore” and a host of Irish pubs in “County Kilburn”. But over the past 20 to 30 years as the community has aged, their families have moved away and with the death of lifelong partners, for many this social network may no longer exist.

The IEAN was formed in 1993 to support vulnerable older Irish people in Britain. It’s now led by chief executive, Sally Mulready who, with a team of three women working part time is also supported by an active Trustee board.

Over the past 26 years, they have supported thousands of Irish people ranging in age from 55 to 99, and have secured almost £40 million for their Irish elder clients. They have helped them get the state benefits they’re entitled to as well as resolved pension issues across two countries. But their key advice work is in the area of housing.

A weekly drop-in advice clinic in Kilburn managed by welfare and housing manager Margaret Geiger attracts 20-25 people while another centre in East London attracts many others on a monthly basis.

They also seek to bring people of all ages together in London to celebrate their culture which is still very strong despite so many years in the UK.

“Our mission is to celebrate that legacy and help to keep it alive and flourishing across the generations.” says Nora.

They organise events involving singing, acting, music, poetry to history and have been running an annual trip back to Ireland. Many of the participants are those who have lost a lifelong partner and are now living on their own without a network around them. The cultural activities are embraced by almost 6,000 people every year and their numbers are rising steadily.

The choir and drama group performed a play written by Nora Mulready on the life of St Brigid at St James’s Church in Piccadilly in central London in February 2019. Several hundred people attended, and the performers were brilliant and so confident. It was such a celebration of our great Irish culture performed by those who appreciate it the most.

The choir group also visited Wormwood Scrubs prison in December 2018 and performed to the Irish prisoners there giving them a festive treat.

The charity receives funding from the Irish government through the Department of Foreign Affairs, the ESB, as well as grants from the National Lottery and the Ireland Fund of Great Britain. The Irish Embassy is a supporter of their work.

Irish people are great at looking out for each other especially when they are abroad, but despite the growth of online networks, for the many it’s the face to face social interactions that will keep us all smiling and happy. This is one network that is thriving and adding so much to enrich the lives of Irish elders in London, and a shining example to us all where ever we live and whatever age we are.

The Irish Elderly Advice Network is based in the Irish Centre in Camden North London. You can contact them here.

Peter Benson is from Naas, Co Kildare and is an active supporter of IEAN.