Wild Geese: ‘The first thing that drew me to the city was the weather’ 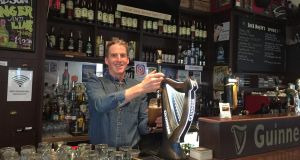 Thurles native Charles Griffin in his pub, Jack Doyle’s in Budapest. “It’s a real outdoor city, people are active, there’s a lot to do here.”

Charles Griffin owns Jack Doyle’s Irish Pub and Restaurant in Budapest, Hungry. The Thurles native is getting ready to celebrate the bar’s tenth year in business this November.

“Year one to year three, it could have gone either way in fairness. I was here working myself, I had Elvira Zoller, who is still with me, and a head chef Elek and literally, at the start, it was the three of us and maybe two or three other staff. It was tough going.”

This wasn’t Griffin’s first venture in the Irish pub scene, he’d worked in bars during college in Carlow were he studied French and Business. Post college, a career in bar work ensued in Cork city until he finally opened a pub with a friend in Bandon on a five year plan.

“It was very good. We worked very hard, Bandon was a good drinking town and there was a good atmosphere in the pub and all that and we were young and attracting a lot of people in. We leased a second bar in Clonakilty and I stayed in that until 2005. And that’s when I wanted to get out.”

A fitness course beckoned, taking Griffin to Dublin, and it was during a break there that he found himself taking off to Budapest.

“A friend of mine was living here and he invited me over for the summer. I just hung out and checked it all out and just really liked it. The following year I packed my bags and moved out full time in 2008.

“In the first year, I set up a real estate company doing apartment renovations and stuff like that. Through that then, I decided that there was an opening here to do an Irish pub, once I’d had some time on the ground and had seen what was going on.

“There was only one Irish pub here at the time and a Scottish pub, which was doing quite well. I just felt there was an opening for anther Irish pub more concentrated on food and music and maybe an older clientele.”

Throughout his first year in the city, Griffin had made enough friends and acquaintances, through sports and the expat community to keep the bar afloat in the first few years.

‘I’d a good base of clientele built up. The students, in fairness, particularly the veterinary students studying from Ireland, were a big part of my core business when I opened up first. You’d a lot of people travelling to Budapest because they were studying here, their families, friends and relations. Tourism wasn’t huge at the time.

“For the first two or three years, we were calm enough, we were tipping away. It was actually the third year before we broke even.”

Jack Doyle’s became the only Irish pub in town and the constant flow of international students, word of mouth and Tripadvisor put the business firmly on the Budapest tourist map.

“We started getting very well known for sports and the live music we do here at the weekend and the food. It built from there then thankfully.”

The process of setting up a business in the capital is not as daunting as it may seem, even if you know little in the way of Hungarian.

The expat community are well rehearsed in the process having set themselves up as businesses in order to purchase property.

“The strange thing about Budapest is, Hungarian is considered the second most difficult language in the world. Even after 10 years, I still don’t speak it in any great way, shape or form. There are actually a lot of people here who are multilingual. They are very educated people in Hungry. It wasn’t a hard process at all once you had the right people in place.

“Taxes are 27 per cent and you pay tax on everything, I pay tax on my rent but in regards to the other bills you’d have in Ireland, they are not as high, like the public liability and your rates. The margins are there to be able to run a successful business as a result.”

The draw of the Hungarian capital, for Griffin, is not all about cheap business rates but the affordable healthy lifestyle that goes with it.

“The first thing that drew me to the city was the weather. It’s absolutely amazing nearly all year round. It’s a real outdoor city, people are active, there’s a lot to do here.

“It’s cheap to live here, in the last two or three years. Like everywhere, fees have gone up mainly because it has become a main tourist destination and Airbnb has had an affect on that. Rents are cheap, apartments are still very affordable as is your weekly shopping or going out for dinner – and the local beer is still only two euro.”