‘At 18, I knew exactly what I was doing when I packed my bags and bought a one-way ticket to Paris’ 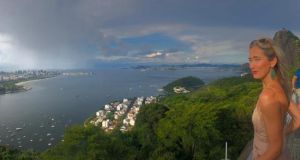 Sheila O’Callaghan in Rio de Janeiro. She has lived in Rio since 2015 where she now runs a Wine Club with her German husband.

Sheila O’ Callaghan is originally from north Cork, but has lived in Rio de Janeiro since 2015. She used to run a publishing company that she set up in 1999, but closed it in 2018 to pursue a new venture with her husband - a Wine Club.

What was the main reason you left Ireland at 18?

It would be too much of a cliché now to say at the age of 18 years, I knew exactly what I was doing when I packed my bags and bought a one-way ticket to Paris. But the one thing I did know is that I did not want to go down the route of going to university immediately (or maybe ever!), and the possibility of living in Paris seemed highly attractive. I was strongly encouraged by my father, who said “Paris is where you watch the world and sip coffee”. He was right, I did lots of that over the next five years living there. Above all, he was encouraging me to see the world. As a young man he had not been allowed to leave for Australia, as he was due to inherit the family farm in Ireland. Back in his youth, once you went to Australia or the US, you never returned home.

So when people ask me if I studied, convinced I must have due to my career path, I am very proud to say - no, I didn’t. I did go to the university of life, and living in Paris was ground-breaking and very formative.

What led you in to the publishing world?

After a few years in Paris, earning well, managing bureau de changes in the days when every European country had its own currency and visitors needed to have French Francs on arrival, I came across the opportunity to work with a publishing company that was based in Madrid, but worked in almost every country in the world. For the next three years I travelled to places as diverse as the Ivory Coast and Saudi Arabia, spending two to four months in each country. I was 25 and had a hunger for knowledge. My job was to compile an in-depth report of the country by conducting interviews at the highest level, and making sure I had the support of the head of state, ministers and CEOs of the largest companies there. This involved a lot of talking, and thankfully that is something that has always come naturally to me.

When I was 28 I decided to establish my own company with two colleagues. We formed Impact Media in London, and quickly became the second-largest company creating content for newspapers and magazines. For several years we represented media such as The Times of London, Forbes, Fortune, The Washington Post and The New York Times in countries where they had no presence or advertising income. I continued to travel and train our staff, and when I stopped in 2018, I had clocked up 89 destinations, 21 heads of state, countless ministers and many great stories!

What is your favourite country?

This is not a simple answer. I love Ghana as I worked there three times over several years. Spending a total of a year there, I interviewed president Jerry Rawlings each time, and he was a force of nature.

Who was the most famous person you have met?

I suppose it has to be Yasser Arafat. I spent three months in Palestine and met him very early on during my work. At 25 I met Richard Gere in Moscow; he was there to preside over the opening of the Moscow Film Festival.

What did you learn from having your own company?

You need a variety of talents. Running a publishing company and one in promotional journalism is all about people. Therefore, recruitment was key. Our staff would need to be open-minded, adaptable and above all team players, as often they could spend six months in the same place with the same two colleagues. Many of my old colleagues from the times I did country projects are still my best friends.

What has being Irish and having an Irish passport meant to you during your travels?

I am very proud to say I am Irish no matter where I go. We are seen as a warm, friendly and poetic nation. Being Irish has opened many doors for me and having an Irish passport has made my travel easier, as often no visas were needed. My husband, who is German, still jokes today that when people ask where we are from and he says German, they nod politely; then I say I am Irish and well, they can’t get enough of wanting to talk to me and tell me their interactions with Ireland and why it makes them so happy. This has been the case in many places I go.

What made you move to Brazil?

I have been travelling since I was 18 and I always thought the older I got, the less I would want to jump on an airplane. But now I live in one of the largest countries in the world and it can take seven hours to fly from one side to the other. I spend most of my time in Rio de Janeiro, the carnival capital of the world. I live in the hills, amongst the rainforest, and my neighbours are monkeys and toucans. I have adopted a small stray puppy who is now very much part of our lives and well, he has grounded my wings. My husband set up a wine club earlier this year with one of Latin American’s major media companies. I don’t go to an office anymore, I still consult with several media companies and I am always there to look at any advertising ideas and branding that the Wine Club is doing. In some ways it is a marriage of two areas we both know a lot about, media for me and wine for him. I don’t think we will be here forever, but for now I am happy to split my time between London, Brazil and Ireland.

Is there an Irish community in Brazil?

I have never searched out the Irish where I go. Most capitals will have an Irish pub, even if it is not Irish owned. I was never a pub person in Ireland and less so on my travels. In Brazil, because I have put down roots here, I have joined the Irish community of Rio. When the Irish ambassador comes through for an event I will attend and I am sure for March 17th, I will sport my favourite colour - green!

What advice would you give to someone interested in a career abroad?

I would say - go. Sometimes you have to take risks. You may not have a job lined up, but things will fall into place. Learning French was a door-opener for me when I started working in publishing. I could work in places such as Mauritania, Ivory Coast and Mali, to name just a few, and was not hindered by language. I have had to learn Portuguese here in Brazil. I lived in Florence for a year when I was 24. All these languages have served me well.