‘I’m learning German. It’s not that different to how people speak in Dundalk’ 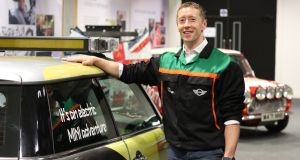 Growing up in Dundalk in the 1990s, the thought of electric cars must have been a million miles away, in a Stanley Kubrick future. For one Louth man, though, that future became his future: James Redmond is now responsible for integrating an all-new electric motor and batteries into the familiar shape of the Mini Cooper, readying it for launch early next year.

Having gone to Bay Estate Primary School and De La Salle Secondary School in Dundalk, Redmond was very quickly certain that a career in the motoring sphere was for him.

“As a kid I loved to sketch, design and make things. I was always fascinated by nature, machines and generally how things work. A car to me quickly became the embodiment of most of these interests and, in this world, BMW reigned supreme for me” said Redmond.

In the long term, my plan would be to be back in Munich. Certainly within the BMW Group

BMW wasn’t his starting point, though. He began an apprenticeship with a French brand, but quickly found that the Gallic way of doing things wasn’t to his taste.

“I started my apprenticeship with Renault, and you always want to get into shaping this stuff. Renault bothered me to my soul. You were working on parts that were so badly made, and the quality was so low, and manufacturers were paying out huge sums in warranty claims.

“You got a lot of experience but you saw the way that build quality trickles down all the way through to a mechanic having to make a repair and a company having to pay out warranty costs,” said Redmond.

“I thought ‘I can see the root cause of this, and I want to be part of it’. I could see what was trickling down, and thought I might be able to figure out why. Studying mechanical engineering, and working with BMW got me into a world where you could go and see where if something, some component, needs to be in a certain place, and maybe that if it doesn’t absolutely have to be there, you can go and get it changed, and make it better.”

That’s exactly what he’s doing now; taking an existing vehicle design, and reworking both it and the factory it’s made in – Mini’s vast Oxford assembly plant – to turn a ubiquitous petrol-engined hatchback into a futuristic electric car.

Needless to say, you don’t get to a position like that without the right qualifications, but Redmond is adamant that people need to consider not just what they want to learn and qualify in, but how they’re going to learn it. He’s received both an honours degree and a masters from Trinity College Dublin, but the important thing, he says, is to know the nuts and bolts of your subject first.

“Gerry Byrne, the engineering professor at UCD, he was with Daimler-Benz too. He had a funny route into the industry. He was in the ESB, then did a degree in DIT, and then went to Daimler in Germany, ” said Redmond. “I met him before I did my engineering degree, and he was a very cool fella. He said: ‘The trade gives you a background, and they’ll never catch you’.

“What he meant was that if you learn a trade first, and you know the literal nuts and bolts, when you start doing a degree, you will be able to skip through all the technical descriptions. The inexperienced person might be able to do the academic calculations, but they won’t understand the thing they’re calculating. And he said they’ll never catch you with that. So I think the order I did it helped a lot, understanding the nuts and bolts first, and then being maybe able to soak up a wee bit more on the academic front.”

Mind you, Redmond is no slouch on the academic front either. He won the president’s prize for student of the year when he studied mechanical engineering in Dundalk Institute of Technology, before he moved on to Trinity, so there’s serious intelligence backing up his mechanical skills.

He’s also deep into his sports and physical fitness, having been on the Trinity Colours Rowing team that beat UCD in 2015 (“That was really the culmination of all the hard work,” he says) and he’s a competitive badminton player, not to mention a marathon runner.

He’s run a number since, for charities including Temple Street and Our Lady’s Children’s Hospital, Crumlin. “In November this year following the launch of the Mini E I will travel to Las Vegas to run the marathon there.”

In terms of coming home, it’s something Redmond does regularly, but the future lies in foreign fields.

“I’ll be back in July two weekends in a row for two weddings, but then it might be four or five months again before I’m home. But the parents love Oxford, and they love Munich, so they come over from time to time. I would think that in the long term, my plan would be to be back in Munich. Certainly within the BMW Group, the skillset is about being at that phase of getting a new car project up and running.

“And I’m learning German. It’s not that different to how people speak in Dundalk. I’m serious. The Irish language lends itself better to German, certainly for me, than to French or Spanish or anything else.”

1 Provisional liquidator appointed to Dublin engineering firm
2 How can I view my dead brother’s will if I’m not the executor?
3 Kerry trading profit rises 12.1% in year of mega-deal miss
4 Bursting of Tesla bubble a case of ‘not if, but when’
5 US reiterates opposition to Huawei equipment being used for Irish 5G
6 Finance Ireland plans stock market flotation in May
7 Bank of Ireland staff in line for 2.95% pay increase
8 Must you pay a price for ethical investment?
9 Irish Reits would benefit from property funds overhaul, Davy says
10 Flutter’s planned merger with Stars gets informal approval in Australia
Real news has value SUBSCRIBE