Irish American Dermot Shea: What to know about the new NYPD commissioner 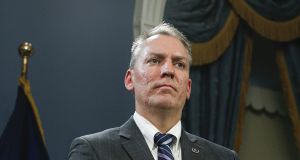 Dermot Shea at the press conference announcing that he will be the new NYPD commissioner. Photograph: Kena Betancur/Getty Images

Irish American Dermot Shea will become the fourth consecutive Irish-American to lead the NYPD. James O’Neill, who stepped down on Monday after three years in the post , is a Brooklyn native whose four grandparents came from Ireland.

He has held a series of senior roles, including head of crime control strategies.

Shea grew up in Queens, one of five children. For a time, the family lived in a one-bedroom apartment, later moving to a bigger apartment in Sunnyside. His father worked as a union handyman and his mother was a stay-at-home parent.

Shea joined the force on the same day as his brother Jim, and cousin Chris. His uncle was also a member of the force, while another brother, Paul, is in the US army.

In 2018 Shea was appointed chief of detectives, a role which gave him overall responsibility for all investigation operations in the city.

As commissioner, he will oversee a force of about 36,000 officers.

Shea, a father of three, assumes the role at a time when crime is at historic lows in New York City.

Shea began his career with America’s largest police force in an era when New York was much more violent than it is today. Curently, the murder rate is at its lowest since the 1950s.

In 1991, the year Shea joined the department as an officer in the 46th Precinct in the Bronx, the city recorded more than 2,000 murders. Last year, there were 289.

The sharp drop in murders, and in crime generally, in those 28 years has coincided with the department’s use of the data-driven, anti-crime Compstat management program.

Shea’s career is in some ways closely linked to Compstat. The system was introduced roughly around the time he began patrolling a beat. He was a protege of its original champion, Commissioner William J Bratton. He oversaw the program in the job he held for four years before he was named chief of detectives in April 2018.

In announcing the new commissioner, Mayor Bill de Blasio cited the breadth of Shea’s experience as the reason he was “uniquely qualified” to push New York’s already historically low crime rate down even further.

Shea, the mayor said, was “a proven change agent, using precision policing to fight crime and build trust between police and communities.”

In addition to his time on patrol in the Bronx, Shea commanded two precincts in the borough and did tours in Manhattan and Queens, working at various times in narcotics, investigations and plain clothes units.

He took on responsibility for Compstat in 2014 when he was named chief of crime-control strategies and deputy commissioner for operations. He was then installed in his current job, overseeing all criminal investigations. At a news conference Monday, Shea recalled his early days as an officer in the 46th Precinct fondly.

“There was nothing better than walking out and just talking to people as you would interact with them day in and day out,” he said. Shea pledged to build on the work of his predecessor, Commissioner O’Neill, when he takes over the top job December 1st.

He also said he would prioritise taking down gangs and getting guns off the streets.

Patrick J Lynch, the president of the Police Benevolent Association, a union, welcomed Shea’s appointment, describing it as a hopeful sign for rank-and-file officers, who Lynch says are in need of support from the top.

“We look forward to working with Commissioner Shea to combat the current anti-police atmosphere and make positive changes that will improve the lives of our police officers and every New Yorker we protect,” Lynch said.

Critics of the department were less enthusiastic. Councilman Donovan Richards, a Queens Democrat who leads the Council’s Committee on Public Safety, described the incoming commissioner as a “personable individual whose heart is in the right place.” But Richards said that Shea’s appointment was a “missed opportunity to really diversify the top office” of the Police Department.

Richards also said that Shea had seemed unwilling to seriously consider complaints about contentious issues like the department’s gang database, where, critics say, names can land too easily and stay for too long. “At this moment, I’m not convinced he’s going to be more aggressive in pushing reforms,” Richards said. – with NYT