Vivien Lusted: ‘There is no hospital . . . no medicine – where do you start?’ 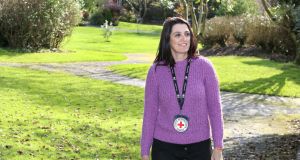 The battle for Mosul was still in full flow when Irish Red Cross nurse, Vivien Lusted, began her work with the humanitarian mission in the city in early 2017.

After months of bitter fighting, the Iraqi, Kurdish and US-led coalition forces were slowly pushing the Islamic State group west, retaking the city, street by street.

The International Committee of the Red Cross (ICRC) was among the first humanitarian organisations on the ground in Mosul, as three years of occupation by the Islamic State group came to an end.

With more than two decades of experience working in conflict areas, Galway nurse Vivien Lusted was tasked with providing medical and humanitarian support for the thousands of detainees housed in makeshift prisons around Mosul.

Today, President Michael D Higgins will present her with the Florence Nightingale Medal in recognition of her work in Iraq, making her only the fifth Irish nurse to receive the international nursing medal since it was instituted in 1912.

“I think it is really difficult for people to visualise a city which has been destroyed. Roads are gone, water is gone, everything is gone. The detainees are only one part of the whole situation. When you see a five-storey building which has been flattened, where do you go from there?” she said.

“Everything was gone [in Mosul], we were starting at the bottom with nothing. We managed to ensure that a basic level of living conditions and health care was put in place in what were extreme circumstances for these detainees. It was about putting the foundations back in and rebuilding something that was completely gone.

“When you talk about getting the basics, you can’t just go to the local shop. There is nothing there, but what is amazing is the resilience of the population to go on and rebuild.

“People are trying to rebuild in Mosul but its going to take years. When there is nothing there, you have to start from scratch. Sometimes that means the real basics – blankets, water and food – and the hope is that after a time the authorities can start to take over.

“When you go to a place like that [the detention centres around Mosul], you see the devastation that is outside the door as well, there is no hospital, there is no clinic, there is no medicine – where do you start? Every small step is a step forward.

“It is difficult for people to imagine. For us [in Ireland], if the electricity goes off for a few hours, you wonder what to do, but you have to find other ways. That’s what I like doing and that’s what the Red Cross is good at, finding a way.”

Over the first six months of 2019, the ICRC has worked with some 45,000 detainees in 61 locations across Iraq. Key to the ICRC’s success there is its neutrality and its commitment to work for the humanitarian needs of all sides in every conflict.

“When people don’t have the basics of life it does spur you on to find a way. I’m not saying its easy, it’s very challenging. I’m not from that country [Iraq], I don’t speak the language, I’m culturally different, so I really have to think about how I can improve the lives of these people,” said Vivien Lusted.

“Iraq has suffered different conflicts over a long, long time. I think it will take years for them to heal. You can’t just go in straight after [a conflict], do a job and then come out, you have to be there for years. I think that is where the Red Cross needs to be for the next while.”

Born in Loughrea, Vivien trained as a nurse in Beaumont Hospital, working there for more than a year after she graduated. Her first oversees placement was a three year humanitarian mission with Concern in Cambodia when she was just 22-years-old.

“I loved if from day one. It was like I’d suddenly found my place. I remember landing in Bangkok at the very beginning of the trip and feeling like I was doing the right thing,” she said.

“I arrived in Cambodia at a very interesting time. It was right at the end of the Khmer Rouge era. The UN were coming in, elections were happening. It was a fascinating mixture of the past and the future way for that country.

“But I had always wanted to work with the Red Cross. I was a Red Cross volunteer when I was a teenager. I did a first aid course and I was one of those young people who spend their weekends at GAA matches and things like that, running on if people got injured.”

Her first posting with the ICRC was in 1995. Since then she has been involved in 13 international placements in armed conflict zones and disaster areas such as Sudan, Myanmar and Liberia.

These often dangerous assignments have ranged in duration from a number of months to close to two years and have made living a conventional life impossible for the Galway woman.

“For me this [working in conflict zones] is my normal life. It’s not for everybody and I’m no better or worse than anybody else. It’s always been my choice to do this sort of work,” she said.

“Certainly, I have made sacrifices for it. I have given up a life at home, which would be normal life for other people. The way I have friends and friendships is different; I meet people from many different countries when I am away. We bond because we have been through the same thing.

“My normal life is being there [on a Red Cross mission abroad], coming back and going again. I’m sure my family sometimes would wish that I would come home but I think that they accept that this is my norm. That’s what it is. It’s me.”

According to Vivien, coming home to Galway can sometimes be a strange experience but it gives her the strength to continue her challenging work abroad.

“I’m seeing poverty and people suffering on a daily basis. When I come back, there is so much here. It’s not saying anything about the people here but I find I have to compartmentalise,” she said.

“I normally get it when I’m in an airport coming home. You see all this Duty Free. I’m coming from a place where there is sand and nothing else and them I’m standing in all this excess.

“But coming home is always a nice thing. There is a safety here, a comfort here, which allows me to reboot. I think you need that sometimes.”

Vivien Lusted will be awarded the Florence Nightingale Medal at the Future of International Humanitarian Law Conference in the Mansion House in Dublin today.

She is one of 29 nurses from 19 countries this year awarded the medal in recognition of exceptional courage and devotion to victims of armed conflict or natural disaster. It also recognises exemplary service or a pioneering spirit in public health or nursing education.