From the Channel Tunnel to the Transcontinental Railroad: Irish emigrants' work can be seen throughout the world 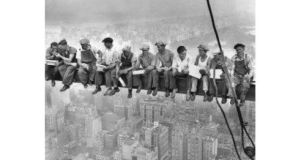 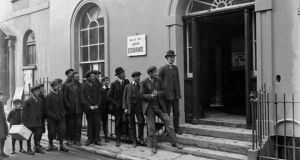 Queue outside of the Waterford Labour Exchange on March 3rd, 1910. Photograph: National Library of Ireland

Irish writer Brendan Behan once remarked: “People who say manual labour is a good thing have never done any”.

Nevertheless, the fruits of the toil of Irish labourers can be seen throughout the world. From the Transcontinental Railroad that first linked the Atlantic and the Pacific Oceans, to the Channel tunnel that connects Great Britain to the Eurasian mainland, Irish hands have shaped the routes and pathways upon which many subsequent travellers and emigrants have journeyed. Today our diaspora plays a leading role in shaping not just the physical world, but also the virtual spaces we inhabit and spend more of our time.

Yet regardless of whether the tools we use are hammers and chisels or laptops and tablets, our work often determines where we go and who we are. What we do and how we do it matters – it underpins our very sense of identity. The objects we choose to retain and surround ourselves with provide insights into perceptions of ourselves, our pasts and perhaps even in our futures.

For the last 18 months EPIC The Irish Emigration Museum in Dublin has been collecting the stories of the things that migrants keep with them. Whether that be a treasured family heirloom, a favourite pair of jeans or simply a memento of a cherished event – no two stories are alike. Often these objects relate to our working lives. For some they remind us of our aspirations.

Dubliner Declan Curtis never travelled anywhere without his treasured philosophy tome (book): “I left Dublin to undertake my Masters in Philosophy in St Andrews, Scotland. It was a very affluent school, Prince William and Kate Middleton met there. This book really sums up my thoughts on the world. When I later emigrated to Paris, I worked in a language school as a librarian and brought the book with me.”

For others these objects can become symbols of transition. Maura Flood shared the story of a commemorative plate she received while working in the UK: “I am Irish, and I lived in London between 1985 and 1990. I worked in the Stock Exchange when the financial markets were deregulated on October 27th, 1986. This was called the ‘Big Bang’, which meant the abolition of fixed commission.

Before this, stock brokers would buy shares from stock jobbers on the floor. With deregulation, they got rid of the stock jobbers - it was the end of the trading floor and bargaining in person. Now all the trading is done on a screen. All of the staff who ran the stock exchange at the time got a commemorative plate.”

For others the right tools can change our lives. Peter Varga, who arrived in Ireland from Hungary, tells the story of his camera: “I arrived in Dublin when I was 19 from Budapest. I was originally studying as a mechanic. I worked for about seven years in a restaurant in Dublin but then I met my partner who encouraged me to pursue my passion for photography.

"I didn’t even have a camera. But I wanted to start on a small project before I began my studies. I used to enjoy talking to the customers in the cafe but my manager wanted me to make more coffee! So I quit to pursue my passion. I started ‘Humans of Dublin’, a project where I photograph strangers on the street and interview them about their lives. I never expected it to grow as big as it did. I feel sometimes you need to be in an uncomfortable position to change and create something different. To me, my camera represents success and the benefits of following your dreams”.

Do you have any objects that encapsulate your memories and experiences? This Saturday, EPIC The Irish Emigration Museum, in collaboration with the Europeana network would like to hear the stories of your working life. Share them with us at our Working Away: Story Collecting Day.