Getting an Irish passport: I’m not a ‘Plastic Paddy’ or disowning my motherland

‘Can I not be at home in more than one place?’ 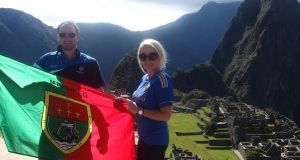 Lainey Broderick with her husband holding a Mayo flag in Macchu Piccu in Peru.

The fear is real. I am not talking about the “Sunday night fear”, which we all know well. I am talking about the here and now as I know my turn is coming soon. The night is drawing to a close, we are all gathered in the kitchen and the singing has started.

And I am not talking about a group shout-singing along to Don’t Stop Believing before the national anthem plays in Coppers. I am talking about the actual singing. You know the one where everyone stands around in a circle and one by one each performer is better than the last. Everyone is bashful and apologetic for their supreme talents. Everyone proclaims they are not that good. Everyone seems to know the words for a back catalogue of songs from home in their head. Everyone that is except me.

I suppose it could be said that I am only Irish on a technicality. With this I appear to have missed out on that singing gene. I am really not good at singing at all. I don’t have a single note in my head never mind the umpteen verses to the Rattlin’ Bog (I can just about handle shouting along to Maniac 2000) .

The crowd are now sombre, listening intently, tapping their toes and heads in time with the sweet lullaby. The audience is respectful and silent. My turn in the singing circle is getting terrifyingly close.

If I may make a suggestion, perhaps singing lessons could be offered with the approval of an Irish passport application? Much has been in the media about Irish passports of late with the Brexit negotiations, but has anyone explored the further repercussions of allowing us tuneless blow-ins into the sing-along club? Also there’s an issue of our divided loyalties – who are we meant to support in the Rugby World Cup now? Joking aside (although the latter question was a very serious one for some rugby fans when Ireland were playing my birth nation Scotland), for me personally receiving my Irish passport cemented the sense of belonging I felt. I was brought up in a family with Irish roots on both sides, have an Irish surname, I’ve studied in Galway and started my career in Dublin. I recently got married to an Irishman in Co Mayo - all while having picked up a quasi-Irish accent along the way.

I grew up close to my Nana. She was originally from Co Carlow and came across to Scotland at 16-years-old to train as a nurse. Our summer holidays were filled listening to Irish songs and to this day on the walls of her house hang the 1916 Proclamation and a painting of Irish nationalist hero Robert Emmet.

Have your say: Is your ‘home’ where you grew up or where you live now?

She always told tall tales of home and never lost the accent to her passing day. She would stubbornly only bank with Bank of Ireland in Glasgow and was elated to hear I was later employed there, frequently visiting me in Dublin. You can imagine her delight when I told her the news I was engaged to an Irishman.

The passport application and documentation required to fill out for this have opened gateways to learn my clan history. There are many questions I wish I had asked when I had the chance. I am working on a family tree, which is proving very interesting and frustrating at the same time as many of the older records are difficult to retrieve. Too late in life do we realise the importance of these stories, family relationships and anecdotes - many of which are never written down.

In my latter years I have grown to have even more connection and inclination with the Emerald Isle as “home”. I have spent years of my life engaging in Irish media, history and culture, alongside that of my native land. While I am not casting off my earlier years nor ignoring my relationship with my fellow Scots, I also feel at one with Ireland.

This causes affront to both sides. I am not disowning my motherland (“where has your Scottish accent gone?) nor do I believe I am a “Plastic Paddy” infiltrating the inner circle. “But you are not really Irish?” is a remark that has been made to me half jokingly.

It makes me laugh when I am “Irish-splained” to after I say I am from Glasgow. Yes, I understand what the All Ireland is, and believe me I have been to more grassroots Gaelic games in fields in the middle of nowhere in the rain than I care to remember. But, my apologies, I am still going to have to support Scotland against Ireland in the Rugby World Cup (I am a glutton for punishment as look at my choice in Gaelic football teams).

Can I not be at home in more than one place? Living abroad in the Cayman Islands adds a third corner to the complicated triangle of “home”. Here, in this kitchen surrounded by Caymanian, Irish, Scots and a plethora of other nationalities in a sing-along, I am at home too.

I search for another word to use, but nothing quite captures the sentiment of “home”. Address, household, nation of birth, dwelling, domicile - none of these really encapsulate the emotion, contentment or memories. Home is a feeling, a sense of belonging and a part of your being.

I’m heading back for a family reunion on the west of Ireland in just a few weeks. I will be looking forward to seeing my “Welcome Home’”at the Dublin Airport immigration desk for the first time landing with an Irish passport.

Instructions on the reunion invitation include for each attendee to put together a party piece or song.

The same should perhaps be included in the passport application ... wish me luck.