From Ireland to Italy: ‘You never know what’s around the corner unless you look’

‘My children were grown up and gone, I had been widowed for a long time, a workaholic for years and retirement loomed’ 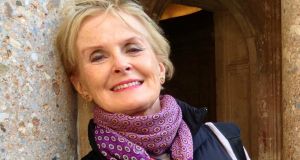 ‘I just couldn’t imagine spending my old age sitting in front of the fire while the rain streamed down the windows outside.’

Retirement beckoned. I was living alone. My children were grown up and gone, pursuing their own lives, and I had been widowed for a long time. I suppose I had been a workaholic for years, running my busy interior design company and I just couldn’t imagine spending my old age sitting in front of the fire while the rain streamed down the windows outside. I was living in the west of Ireland and becoming a bit stiff and creaky and was suffering from SAD (seasonal affected disorder) so I decided the time had come to try to fulfil a couple of lifelong ambitions.

First of all, I decided to move to sunnier climes as I couldn’t imagine spending the rest of my days having to rely on a SAD lamp for company. Having spent many holidays in Italy, first with my parents while they could still travel and later on alone, I decided that that is where I wanted to live.

I began house hunting online and every time I visited there, I would go somewhere different and meet up with various estate agents to show me properties. It was a very interesting time and as retirement loomed I began to focus on the Veneto region of north eastern Italy. This was an area I knew well having visited Venice frequently over many years. It was in The Euganean Hills close by that I finally found a property I liked and could afford. I made an offer, which was accepted, and my life after retirement began.

Moving to Italy alone was a very difficult process, but I was absolutely determined to do it. Many friends questioned my sanity. They were concerned about my lack of Italian language skills and the fact that I had no friends there, but my family had heard me talk about my greatest wish for several years and were truly supportive when they realised that it was actually about to happen. Basically, nobody placed any obstacles in my way and if they did I was so focused on my goal that I didn’t notice them.

My second ambition was to write a novel. When I was 15-years-old, I won a national essay competition. It was, for me, verification that I could actually write. I had an English teacher at school in Rathfarnham, Sr Norbert, who was very encouraging and I began to write poetry and short stories with illustrations. I wanted to be either a journalist or an architect, but life intervened and, over time I developed my interior design business. but I wrote newspaper and magazine articles for years and waited for the opportunity to do nothing but write. Life was busy and I needed an income, having become a single mother, with four children, early on.

When I moved to Italy in 2013, I began to write a blog, which later won awards. It was a big surprise and affirmation that I could actually write.

For years I’d had the urge to write a novel, but first of all I wanted to write a handbook for any ladies who might want to project manage their own home renovations. This was called “Renovate and Redecorate without Breaking a Nail”. I self-published and considered I had done my duty to my clients by passing on some hard-earned information. Now for my novel.

The story evolved easily enough as I was living very close to Venice and, as a travel blogger about all things Italian, I was spending a lot of time there and becoming very familiar with its eccentricities. I decided that my first work of fiction should be set there, with lots of atmospheric winter fog. Working on the premise that you write about what you know, my heroine is an Irish interior designer who gets offered a fabulous job in Venice.

As part of my research I interviewed a real-live gondolier and I have incorporated many of the tales that handsome “Marcello” told me during our lengthy chat sitting on his magnificent gondola. It was fascinating to hear his take on the life of a gondolier. Of particular interest to me was to find out whether or not the tales of romance surrounding these gondolieri were really true or merely fiction. “Marcello’s” responses were very interesting indeed.

When I finally finished my book I dreamed of getting a literary agent, not realising how difficult it is for a first time writer to capture the attention of someone willing to take a chance on you. So I sent the manuscript, or its synopsis, directly to various publishers too. I received in the region of 40 rejections when, much to my great excitement, my book was finally taken up by a publisher in January this year. My perseverance had finally paid off.

In the meantime, while all this was going on, my life took yet another, wonderful, turn. While I was trying to fulfil yet another ambition: to visit all the early Palladian villas in the Veneto, I went to see Villa Pojana near Vicenza. There I met a retired journalist and fellow blogger of similar vintage called Tom. I had, by then, only been living in Italy for a few months, but we had so much in common it seemed like a miracle.

We got married in July 2016 and moved south to Puglia, where we have an olive farm near Ostuni.

My friends and family have, long since, ceased to be surprised at my life dramas, but were taken aback when I told them my long held ambition of having a book published had actually materialised. They have all been wildly supportive. They had already weathered the shock of seeing me pack my bags and move to Italy, followed by the fact that I then met, and subsequently married, a fellow pensioner - an American - after I arrived in Italy.

Retirement is wonderful! I have had many, many people - mostly women - who love the idea of moving to sunnier climes, finding romance and “living the dream” - ask me how I did it. I tell them that it hasn’t been easy, a lot of luck was involved, plus focus and a degree of self-confidence, I suppose. I was definitely lucky the way things turned out. I tell people not to be afraid of following their dream and see where it takes you. You just never know what’s around the corner unless you look.

Orna O’Reilly is originally from Co Galway and now living in Italy. Her new book is called The Blonde in the Gondola. She also writes an award-winning blog  called Orna O’Reilly: Travelling Italy. See ornaoreilly.com