20 years after I ‘did’ Erasmus, Berlin is still my home

At the time, it seemed like a tiresome hoop to jump through. But it changed my life 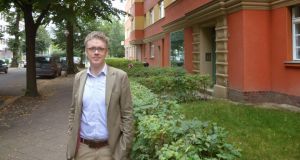 Derek Scally in his neighbourhood in the Wilmersdorf area in western Berlin.

Keep a diary, Mae West once advised, and one day it will keep you. Sadly, the red copybook I used as a diary 20 years ago, and rediscovered recently, contains too little incriminating information about the rich and powerful to allow me to retire early. Still, my 1999 musings have been good for one thing: keeping me in laughs.

That was the year I “did” Erasmus in Berlin: skiving off lectures at the Humboldt University but learning a great deal at the University of Life, opening hours midnight to 6am.

I had spent the previous two summers in New York and had toyed with the idea of moving there permanently after graduating from DCU’s journalism programme. Because I had studied German during my degree, however, completing my studies required studying in Germany. As it loomed, the Erasmus exchange seemed like a tiresome hoop to jump through. In hindsight, it changed my life. And, 20 years on, Berlin is still my home.

I am just one of nine million people who, since its foundation in 1987, have participated in the Erasmus (European Action Scheme for the Mobility of University Students) programme. In 2014 the programme expanded its reach into Erasmus+ to allow trainees, non-university students and teachers experience life in another part of the bloc.

Today, at the Irish Film Institute, you can catch Citizen Europe, an Irish co-produced documentary exploring the deep roots – and far reach – of a programme first mooted half a century ago.

The film debuted on the Franco-German television station ARTE on the eve of the European elections in May, and has been building buzz across the continent since then. (Full disclosure: I make a brief appearance).

For any former Erasmus participants, watching French trainees in Lithuania or Germans in Greece is a gentle, nostalgic journey. But the film has a timely, urgent and political edge given the threat to the EU project posed by the rise of populism in Europe and the darkening Brexit shadow. Calmly, the film makes the case for enlightening exchange over ignorant navel-gazing.

One set of problems

For Timothy Garton-Ash, the British historian, European integration and the Erasmus programme have solved one set of problems and created others for today’s younger generation.

“They know nothing but Europe whole and free, they sort of take it for granted,” he suggests in the film. Entire generations of young Europeans think nothing now of relocating to the other end of the continent for work or study. “There’s never been a Europe like this in history. This is the first generation of self-evident Europeans. They have Europe, but how much do they really believe in it?”

Among the first Erasmus participants featured in the film is Pascal Bonnichon. He arrived in a dark and damp Sligo in 1987 and fell in love with Siobhán, the girl next door. Today they have children for whom narrow national identity carries as little meaning as it does for their parents.

“I wish everyone had a chance to live away from home . . . to build your life and form your own personality,” says Bonnichon.

That is echoed by Greek architecture student Minos Digenis, whose 1993 Erasmus exchange in Barcelona, where he still lives, gave him a sense of freedom.

“I have lost the fanaticism of coming from a certain country,” he said.

That reaction is no surprise to Bologna literature professor Maurizio Ascari, who sees Erasmus in the border-crossing tradition of Europe’s Grand Tour.

“We have perhaps forgotten that the history of Europe has been marked by a dynamic of exchanges,” he said. Erasmus is interesting as an EU endeavour, he suggests, for focusing on the individual and allowings participants to cross borders and remodel their own identity.

Rachel Lysaght of Underground Films in Dublin says being a co-producer on Citizen Europe – with others from Greece, France and Bulgaria – was a crucial collaboration, given the squeeze on creative documentary budgets in Europe. The project also helped her recall her own European experiences living in Italy and France.

“We’ve no problems going from A to B and are freed up from bureaucracy to enjoy the cultural nuances and differences,” she said. “I think this is something we should not be complacent about.”

I hope my Erasmus experience means I will never be complacent about the European project. Living in Berlin for the first time I experienced the German cliches (the neighbours who spent Sundays in the nude) but also embraced local tastes for sausages and pumpkin-seed bread. Above all I realised that, in Europe, there is no automatically right way of doing things. Certainly not if, as in Germany, it involves paprika-flavoured crisps.

From the balcony of my €150-a-month flat in eastern Berlin, I was privileged to learn how feeling European is a complementary way of being, one that slots in alongside one’s national identity. Since encountering Erasmus in 1999, Irish identity alone has no longer seemed enough.

Citizen Europe is screening at the IFI Documentary Festival on Saturday September 28th at 3.40pm