An Irishman’s Rugby World Cup: ‘So many Japanese people dressed in green’ 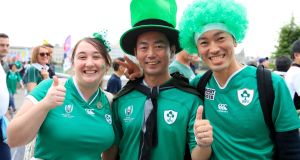 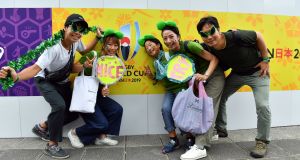 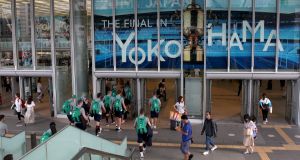 The Irish rugby team leaving Yokohama in Japan after the game against Scotland on Sunday. Photograph: Dan Sheridan/Inpho 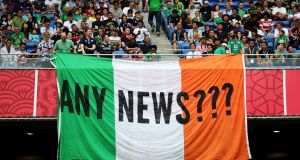 Irish fans hold up a Irish flag with the words Any News??? at International Stadium Yokohama on Sunday: Photograph: Stu Forster/Getty Images 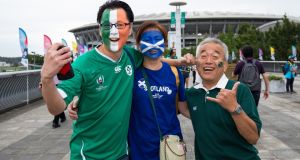 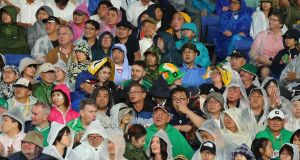 Fans at the Ireland and Scotland game in Yokohama on Sunday. Photograph: Cameron Spencer/Getty Images 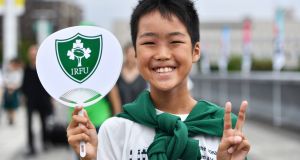 Fans at the Ireland and Scotland game at the International Stadium Yokohama on Sunday. Photograph: Ashley Western/PA Wire. 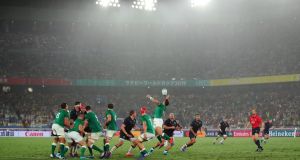 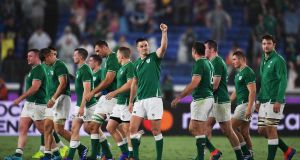 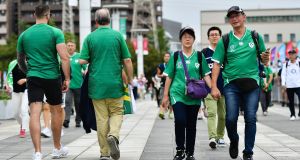 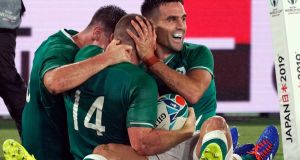 Andrew Conway (C) of Ireland is congratulated by Conor Murray (R) after scoring a try against Scotland during the Rugby World Cup match in Yokohama. Photograph: Franck Robichon/EPA

It’s not often you find yourself singing Molly Malone with Ireland’s Ambassador to Japan on the main street of one of the biggest cities in Japan, but that’s where I found myself last weekend for the Rugby World Cup Ireland festival in Yokohama.

“Not bad for a small rock in the ocean,” the ambassador Paul Kavanagh observed, as we cheered on the Japanese band that entertained the mostly Japanese crowd with verses of Irish favourites and even a blast of Ireland’s Call. About 1,300 Irish people live in Japan, which has a population of 127 million.

I was surprised to see so many Japanese people of all ages, dressed in green, to celebrate all things Irish. As the band played on people wearing green T-shirts, mostly Japanese, mingled among the crowds and the green balloons that adorned the lamp posts. There were stalls selling Guinness and Irish whiskey as well as a group of Japanese people doing Irish dancing in full Irish dress.

Of course, Yokohama is no stranger to Irish festivals. Last March on the same street, Motomachi, was closed off for the annual St Patrick’s Day parade as was Omotesando in Tokyo.

The parades would rival events held in Dublin or New York. It seems the Japanese have an affinity for all things Irish and even more so recently.

When I first came to Japan 15 years ago, the only places where you could buy something from home were the Irish pubs, where Japanese business men and women would savour their pints of Guinness that cost €8.

These days, it’s not uncommon to find the Irish flag on a packet of cheddar cheese in the local supermarket or a concession in a department store displaying a range of Irish wool products.

Now, thanks to Ireland topping the World Rugby rankings, we have become brand ambassadors for world rugby, and especially in Yokohama, where posters of Johnny Sexton and Conor Murray tower over passersby in the station.

In Motomachi last Saturday, I was happy to play my part as a resident Irish man in Japan and sing along with the Japanese Irish band as they cried “cockles and mussels, alive, alive, oh…” as the crowd joined in with the chorus.

After Ireland’s big win with a score of 27-3 against Scotland on Sunday, Japanese commentators are tipping Ireland to go all the way to lift the cup in the international championship. There will be many more Irish sing alongs yet.

Andrew McCarthy, who grew up in Co Limerick,  moved to Japan 15 years ago  and works as a teacher and researcher for Oberlin Academy in Tokyo

‘Did I miss anything?’ A modern Rip Van Winkle emerges, blinking, into lockdown
Real news has value SUBSCRIBE