The first Republic of Ireland Soccer Supporters Club: It took decades for many to accept English accents at Ireland games 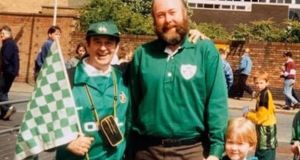 I remember that late warm July evening in 1984 like it was yesterday. I had just finished a shift at Baker Street and made my way along the Euston Road to the Prince of Wales Feathers pub in Warren Street to meet some Irish fans I knew. Earlier that year, the first Republic of Ireland Soccer Supporters Club had been set up in Dublin, and now a Longford man, Gerry Lappin, had concluded that the Irish travelling base in Britain needed something similar.

Last weekend the London Branch of RISSC Club celebrated its belated 35th birthday at the Claddagh Ring in Hendon, which is the club’s current home, with Republic of Ireland manager Mick McCarthy in attendance. As regulars at away games we were keen to be involved back in 1984. For years I’d kept a newspaper photo of that first meeting from The Irish Post. More than 60 people attended that meeting. I recently posted it on Facebook and it was good to see most of the young lads there that I knew were still alive and some still going to games.

At 18 I was probably one of the youngest faces in that photo, but already I had been to watch Ireland in four foreign countries, my first being in Rotterdam in 1981 with my father. Watching football in the early 1980s consisted of dull and often violent visits to Highbury. Travelling to watch Ireland was a whole new level. That night reminded me of Chris Rock’s character Pookie in the film New Jack City talking about crack-cocaine. The Stadion Feyenoord was my “Enterprise room” and supporting Ireland to a draw against a team that just over three years ago previously were in a World Cup final had me “beamed up”.

What is compelling about that picture are the people in it. The vast majority are second-generation fans born in or around London. It gives the lie to the fact that only someone born in Ireland, lived in Ireland or has an Irish accent, supports Ireland. In 1984 Ireland had never qualified for any major tournament. Those pictured were not glory hunters or bandwagon jumpers, but true Irish fans as Irish as anyone born in Ireland who would have ran through a brick wall to win just one Irish cap.

The first away trip was to Denmark that November in a 20 hour coach journey to watch a 3-0 beating. A trip was made to Bern in Switzerland the following year and the club joined the three Irish travel agents that hired an Aer Lingus 747 to Moscow. But for most of us the club was a meeting place and ticket outlet using Transalpino under-26 train tickets or Eurail passes providing the transport.

Membership reflected the young soccer fan in London. We were drawn from all the London clubs, big and small, as well as Manchester United, Liverpool, Leeds and Celtic. We also mirrored the footballing culture of the time, mostly men. Sue Dunne, the club’s first secretary, was one of the few women members and remembers an era “completely male dominated” where “ladies fit” shirts and female commentators were absent. Nevertheless, she did not feel unwelcome: “I’d been going to football with my parents since I was a young child so I was used to the rough and tumble of going to matches, being herded in and out of grounds, witnessing fighting, hearing bad language and abuse,” she recalled. “Being a woman didn’t make me any different to the others. Football was my main hobby that kept most of my spare time occupied. I went to Arsenal home and lots of away, and my holidays were all planned around Ireland’s fixtures.”

The club successfully kept discipline, but at least one member has been imprisoned for (club not country) hooliganism, and was kicked out of the club. Harder to manage were our politics. We were mostly Irish passport holders, and as such in that era would be stopped at ports for a brief chat. After reading Tim Pat Coogan in Wherever Green is Worn describing Comhaltas receiving a visit from MI5, I’m doubtful that the spooks didn’t at least poke their heads through the door at our meetings.

Membership remained between 50 and 100 members, and heavily London born until Gary Mackay’s late winner in Sofia on November 11th, 1987. Euro 88 transformed the club, proliferating membership and transforming its composition into roughly 50 - 50 between first and second generation Irish. By 1991, the club had more than 600 members, and was perhaps the biggest Irish supporters club anywhere. Club chairman for almost two decades, Declan Finnegan, who originally from Wicklow, joined in 1989 after seeing the club discussed in The Irish Post: “I have formed many friendships with other members, and have been proud to be involved in the running of the club and seen its development over the years,” he told me.

It also took decades for many to accept English accents at Ireland games. The club’s first trip was followed by the Sunday World headline “Randy Paddies Shock Sex Mad Danes”. A couple of patrons had attempted sex at the dimly lit City Pub to Irish cheers of “Here we go” some , newspapers noted, were in “English accents”,

On the eve of the 1988 European championships Derek Foley wrote an article “Louts Out!” in the Evening Herald with a cartoon straight out of the Thomas Nast school of Irish stereotypes. London Irish “ who revel in the epitomising the ‘more Irish than the Irish themselves’ syndrome” were heading to Germany. One character, a Frankenstein’s monster, wore a shamrock jumper with the words “When London Irish Eyes Are Smiling”. Come the 1991 game at Wembley, the London RISSC itself came under scrutiny and again not for anything positive.

Much of the growth in the first seven years was down to the club’s second chairman Tony Booth. Booth, another “minority” being London-born but from a Church of Ireland background, was an avid Harrow Borough fan who sadly passed away in early 2002 following a four year battle with leukaemia. In late 1990 he contacted the Football Association(FA) about an allocation, who were themselves concerned about Irish fans mixing with home fans. Meeting the FA’s David Bloomfield, Booth was asked how tickets many he needed. Booth replied one for every one of his 620 members. Bloomfield declared: “Done”.

News of this exchange leaked to the Dublin press. “Ticket joy for supporters” was how The Irish Press greeted the news, claiming Christmas “came early for at least one section” of Irish supporters. But travel agents and desperate fans quickly became jealous. Forgetting that these tickets were taken from the home allocation, the then minister for sport Frank Fahey demanded all the 7,500 plus tickets the FA were distributing to Irish fans in England be handed to the Football Association of Ireland (FAI) instead, telling The Irish Press. “[THE FA] were satisfied that only genuine fans would get their hands on tickets, but we don’t see it that way”. We were particularly irritated by this stance, and our fears of being down any pecking order were confirmed when the FAI gave us a paltry 15 tickets for the 1994 World Cup finals.

Relations have improved since and for all his bad press former chief executive John Delaney has been an excellent friend of supporters’ clubs. Taking aside that the Irish population of London has shrunk since 1991, the club’s membership today is 527 with those returning to Ireland tending to retain it.

Whether the club will be around for its 70th anniversary is something many of us in that photo will not see, but I’m hopeful the club continues as a place for all Irish fans in the English capital to meet. Current chairman London-born Martin Prendergast, who was just four at the time of the first club photo, joined in 1998 and his son Cian (7), who has been to about 30 matches now, will be a mascot at the Denmark game in November: “It’s been brilliant going to games over the years, forming friendships on our travels,” he said last week. “Brady in Lille was my ‘Houghton 88 moment’ and hopefully it made a generation fall in love with the team”.

Pat Redmond is a founder member of the London RISSC and author of The Irish and the Making of American Sport: 1835-1920 and The Irish-American Athletic Club of New York.