A by law was introduced in Quebec in 1845 banning hurling in narrow back lanes and alleyways of the city as it was considered too dangerous. 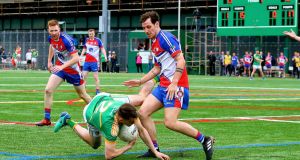 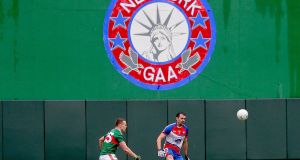 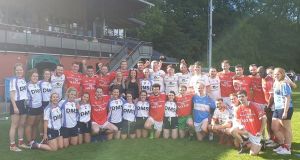 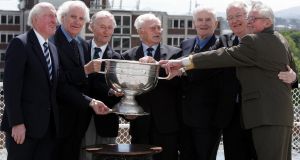 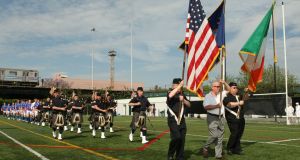 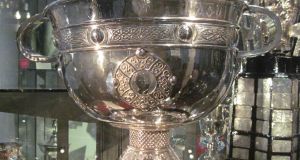 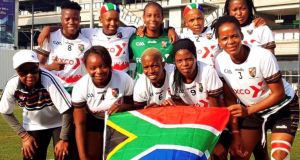 On a sizzling hot day in mid-September, Cavan’s Mick Higgins darted past his Kerry opponents to score a crucial second goal for the trailing men of Breffni in the All-Ireland Senior Football final. Hungry for success and determined to bring the Sam Maguire home he, and his teammates, fought voraciously against the defending All-Ireland Champions to eventually clinch a memorable four point victory.

Yet this was no ordinary final. For one it was unseasonably warm, with temperatures reaching over 30 degrees. Secondly, Higgins had the privilege of claiming his first All-Ireland medal only a few miles from where he had been born; surprisingly the pitch wasn’t situated among the green fields of the Lake County nor along the banks of the Royal Canal but in a baseball stadium in upper Manhattan. A New Yorker by birth and a champion by sheer force of will I’m sure he couldn’t have helped but feel that Gaelic games had just gone global. Yet in truth it had done so long before.

1 Large crowds gather on Dublin’s Grafton Street on eve of lockdown
2 200 Irish retailers for all your online Christmas shopping
3 Coronavirus: Three further deaths and 1,066 cases reported in Republic
4 Level 5 golf shutdown: Ireland one of few countries to close courses
5 Galway nursing home sees 26 out of 28 residents test positive for Covid-19
6 Life under Level 5: Where can I go, who can I see, what is closed and what is open?
7 Lockdown meals: 50 great Irish restaurant food boxes to go
8 Why work more than 15 hours a week?
9 Body of woman and baby boy found in separate locations near Lucan
10 Guinness brings out a non-alcoholic version of the black stuff
11 Waterford woman accused of sharing pictures of boys who murdered Ana Kriégel
12 Borat 2: Rudy Giuliani’s trouser-reaching scene is the work of a daring young woman
13 Gym owner who planned to stay open changes mind after gardaí visit
14 My Irish passport has calmed tempers at borders and airports
15 How long can Government afford to keep State pension age at 66?
16 Thousands of gardaí mount checkpoints and patrol parks, beauty spots
17 ‘You guys are amazing’: Matt Damon’s message of support to Temple Street children, families and staff
18 Developer’s impeccably restored Fitzwilliam Square Georgian for €3.5m
19 Dan Martin toasting another stage win at the Vuelta
20 What will €250,000 buy in Dublin 7 and Co Clare?
21 John Gilligan arrested along with two others in southern Spain
22 Disappointment and frustration par for the courses as golf goes into lockdown
23 Maxwell denied seeing Epstein involved in ‘inappropriate underage activities’
24 'You can’t see the waves coming' - crew describes dramatic rescue of ship off Irish coast
25 Covid-19 restrictions in Europe: how does Ireland compare?
26 People will need to get used to a ‘simpler life’ because of Covid-19, says prominent medic
27 Bus drivers faced ‘mayhem’ as passengers tried to travel, union says
28 Nearly 400 Brazilians have tested positive for Covid-19 in Ireland, data shows
29 Galway’s Aerogen plays key role in Covid-19 therapies
30 Don’t worry about the deficit – the lockdown risk is to jobs
31 Mystery around Pope Francis’s backing for same-sex civil unions
32 Philip Reid: Hard to find the sense in closing golf clubs
33 ‘Rapidly accelerating volume of calls’ and lack of staff led to weekend collapse of Covid-19 tracing
34 Suzanne Lynch’s US Election Diary: Trump ready to go on the attack over Biden's son in final debate
35 Covid-19: Belgium’s foreign minister (45) in intensive care
36 A further three deaths and 1,167 new Covid-19 cases reported in the Republic
37 Google's incredible power is the result of decades of regulatory failure
38 Suzanne Lynch’s US Election Diary: Trump ‘walks out’ of TV interview at White House
39 On the Rocks: Bill Murray and Rashida Jones are perfect in Sofia Coppola’s latest film
40 International Dublin Literary Award: Anna Burns becomes first Irish woman to win €100,000 prize
Real news has value SUBSCRIBE