Irish in Britain: Share your views on Boris Johnson

What kind of prime minister do you think he will make? Have your say 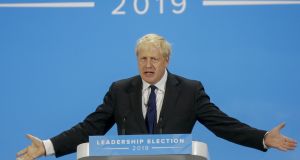 Boris Johnson is expected to replace Theresa May as leader of the Conservative Party this week. Photograph: Simon Dawson/Bloomberg

Boris Johnson will become Britain’s next prime minister after being elected leader of the Conservative party, defeating Jeremy Hunt in the party’s leadership contest. However, earlier this week two senior ministers had already said they would resign before Mr Johnson becomes prime minister. Chancellor of the exchequer Philip Hammond says he could not serve in a cabinet committed to taking Britain out of the European Union without a deal.

If you are living in Britain, Irish Times Abroad wants to hear your views. What kind of prime minister do you think Johnson will make? Will it be a disaster as many predict? Or will he have your support? Will his stewardship be good for Ireland? What do your friends, neighbours and colleagues think?

You can share your opinions using this form. Please include a few lines about yourself - where you live, how long you have been there, and what you do, and attach a photograph of yourself if you have one to share.

What kind of prime minister do you think Boris Johnson will make? Have your say

A selection of contributions may be published on irishtimes.com.

If you are reading this in the Irish Times app, click here to contribute.

Billie Eilish: Her stance that her body is not public property is still a radical act
Real news has value SUBSCRIBE