Irish in London protesting against Brexit: ‘Our commitment to stopping Brexit does not end with a Boris Johnson government’

How can a placard that says ‘No Border No Brexit Just Peace’ be so provocative? 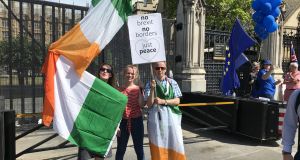 Peter Benson, originally from Co Kildare, has lived in Britain for more than 35 years and is an active anti-Brexit campaigner. He joined a group of Irish people to protest against Brexit, among a number of other groups of protesters, outside Downing Street this week as Boris Johnson was appointed Britain’s new prime minister.

In the searing heat of more than 35 degrees in London, as the crowds gathered to protest against Boris Johnson’s new government on Wednesday, the worry that a single ego is determining the future of an entire nation has never been clearer.

I joined other Irish friends from Newcastle and elsewhere on Wednesday; the bonds that unite us in our protest are strong. Carrying an Irish flag outside parliament and Downing Street is not with out some risks, we often get abusive comments, and regretfully on one occasion I needed police protection. But how can a placard that says “No Border No Brexit Just Peace” be so provocative?

Besides some negative reactions, our presence was welcomed by many; we received positive messages and thumbs up on Wednesday. Carrying an Irish flag attracts much attention from the world’s media, and it’s a pleasure to talk about the Good Friday Agreement, how Brexit will undermine it, and explain our concerns.

We are standing up for our kids’ futures , our jobs, diversity, the environment, the ability to access the European Erasmus education programme, and even the most of basic of human needs - access to European Health Insurance Card. The card is so vital to the elderly Irish here in the UK, who are part of the reason why protesting is so important to us.

But the number one reason for us and for so many others to protest is what our flag represents in the heart of London. We are standing up for the Good Friday Agreement, and all the rights and benefits this represents to the people of Northern Ireland. We have educated hundreds on what the agreement means, talked to international media and the permanent protest teams who turn up every day.

In the boiling heat our desires grow stronger and our commitment to stopping Brexit does not end with a Boris Johnson government. We will all continue until this madness stops. My fellow protester, Sinead Walsh from Kill, Co Kildare sums it up so well when she says that Johnson has filled his cabinet with hardliners determined to deliver a “kamikaze” Brexit. He has been sacked twice for lying, made multiple racist comments and I believe he will sacrifice the Good Friday Agreement without a second thought. That he is unfit for office is a gross understatement.

Our protest movement will not rest over summer. We cannot leave it to someone else, as we are the ones that need to be able to be able to look our children in the eye and say “I did everything I could”. We may only be a handful of committed Irish individuals, but our flag and messages have resonated around the world, unfortunately not into the corridors of power in Westminster just yet.