Wild Geese: ‘After two years, I was promoted to foreman electrician’ 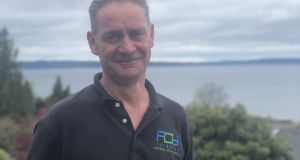 Mullingar man Donny Foy took a roundabout route to Seattle. “My first stop was going to be Australia but, alas, a girl got in the way and I went to San Francisco instead.”

Donny Foy, founded the Foy Group in 1999 with a contract that required working through the night.

“Our first customer was a truck-manufacturing company called Paccar, located in the Seattle Metro area. They operated 16 hours a day, which meant that we could only work between 11pm and 6am. It was to replace every light fixture in their entire facility.

“We kept the manufacturing moving and this I believe is what got us our first big job. And it allowed me to hire people, some of whom are still with me today 19 years later.”

The Mullingar man took a roundabout route to Seattle. It started at Castleknock College, in Dublin. Foy had just turned 15 when he decided to do an electrician’s course in what was then called Anco.

“I loved working with my hands,” Foy recalls. “They had to keep up with my brain which was moving at a hundred miles per hour.”

During his first year he earned £20 per week, and £7 of that was spent on rent. Rather than take the train or bus home every weekend he would hitchhike. On achieving his certification as an electrician in 1984, his primary aim was to set out and discover the world.

“My first stop was going to be Australia but, alas, a girl got in the way and I went to San Francisco instead.”

He slept on the floor of his friend’s girlfriend’s apartment for months on end. “I was hugely grateful to the Robinson family for their support but, after six months, I returned to Ireland without a plan except I had told my mother that I would come home.”

Just two months later, the wanderlust took over again when Foy’s best friend asked if he would travel with him to Dallas.

“Texas is an interesting place to live if you’re an Irish guy,” he says. “I had to slow my speech down if I was to have any chance of survival here. And the Texans are not so good at lip-reading.”

Foy worked in Dallas as an electrician primarily, but he also did tile work, worked on people’s cars and played rugby.

“It was a good time until the savings and loan debacle happened around 1987. All construction work in the south dried up overnight.”

With little choice but to move on, he packed everything into the back of his truck and set off for Seattle. “I didn’t know a thing about the city except that there was plenty of work there and they needed electricians.”

Foy considers it the best move of his career. His first job was on the largest federally-funded project at the time, called the I90 tunnel, or the Mount Baker tunnel.

“When I arrived onsite, my mouth just opened wide. It was huge. After two years, I was promoted to foreman electrician and I fell in love with the industrial side of the electrical business.”

From the I90 project he went on to work on many industrial projects with different contractors throughout the Seattle Metro region, eventually ending up on the campus of Boeing. Foy stayed with the aircraft manufacturer for almost 10 years. He and his then wife, who he met while working for Boeing, both quit their jobs and moved back to Ireland. “The plan was to stay a year and I don’t think we lasted 10 weeks.”

Back in Seattle, Foy was determined to start his own business. His son, Jack, was born in July 1998 but Foy didn’t see much of him as an infant. Initially, he joined an organisation called Vistage, a CEO-mentoring group. It was very helpful both for mentoring and networking. Other Irish networking opportunities he recommends include the Seattle Gales GAA Club, the Irish Heritage Club and the Irish Network in Seattle.

There are many good-paying jobs available in the Seattle Metro area, he says, especially in IT, banking and the trades. Large employers include Amazon, Microsoft, Expedia, Google, Facebook and Boeing, which are almost all home-grown Seattle companies.

But he warns, “Seattle can be an expensive place to live so I recommend doing some research on the cost of living here.”

Foy Group is now working for the aircraft industry, in airports, manufacturing facilities and machine shops. It also has a division working on energy management systems. Altogether Foy has 100 full-time employees, having peaked in 2014 at 160. “We recently moved our offices out of the city of Seattle to the city of Renton, six miles south, to allow better access to our clients.’

Jack has expressed interest in taking over Foy Group from his father some day.

“We are in the process now of bringing in a CEO to help double the size of the company over the next five to seven years, to set up a mechanism where Jack can be mentored into the ownership role. We are all excited for the future of Foy Group Corporation.”