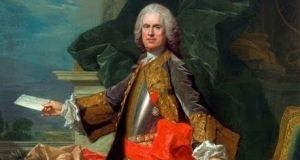 Portrait of Ricardo Wall by Jean-Baptiste van Loo in 1753.

Any Irish travellers passing through the olive strewn landscape of eastern Andalusia in the 1770s would have made sure to call at the estate of the renowned Ricardo Wall y Devereux. There, provided they submitted the right credentials, they would have been warmly received and regaled with stories from an Irish man who rose to the very top of the Spanish royal court.

The son of recently displaced Irish Jacobites, Richard Wall, as he was then known, was born in 1694 in the French city of Nantes nestled at the mouth of the Loire River. The city acted as a refuge for exiled Irish aristocrats and mercenaries and the “Irish of Nantes” soon became a powerful mercantile group involved in the transatlantic trade. Thanks to the support of this influential lobby group Wall was appointed a page to the Duchess of Vendome, one of France’s most senior nobles, while still a teenager. By the age of 22 he had departed France for Spain, transferring to the royal court as a page to Cardinal Alberoni, then Chief Minister of Spain. With the consent of the cardinal he joined first the Spanish Navy then the Royal Army and fought in several prominent engagements on land and at sea.

His first posting as an infantry man was with the Hibernia Regiment, a distinguished unit of Irish mercenaries originally comprised of men who had defected from the English army in 1587. Wall gained the rank of Alférez (second lieutenant) and took part in the Spanish campaign to annex Sicily, most notably in the battles of Milazzo and Francavilla, and was made aide-de-camp to the Spanish commander, the Marquis de Lede.

After King Philip V’s ambitions in Sicily were dashed by the combined forces of the Holy Roman Empire, Britain, France and the Dutch Republic – Wall and his regiment were redeployed to North Africa to drive back the Moroccan army from the gates of Ceuta. Wall was promoted to Capitán, and now a member of the Batavian dragoons, helped to successfully lift the siege before de Lede’s forces were recalled to Spain.

Wall might have simply faded into obscurity at this point were it not for his unwavering support for the Jacobite cause. In 1727 he was invited to accompany the Duke of Liria (a grandson of James Stuart, the exiled Prince of Wales) to Moscow where he had just been made ambassador. Here he gained valuable experience as a diplomat, and won the respect and admiration of the duke. Wall would also accompany him to postings in Vienna and Naples, and was considered invaluable. Between these he also took part in the Bourbon re-conquest of the Kingdom of the Two Sicilies. His successes did not go unnoticed and he was invested in the Order of Santiago in 1737 and in 1741 was made Encomienda of Peñausende, effectively feudal lord of a tract of western Spain. He remained with the army until 1746 when he was wounded in battle and returned to the diplomatic service. He was promoted to Brigadier General and posted to Genoa temporarily before being dispatched to London where he would become Ambassador in 1752.

Returning to Spain the following year he was elevated to Lieutenant General of the Spanish Army and, having impressed King Ferdinand and Queen Barbara, succeeded his ally José de Carvajal as first secretary of State, effectively prime minister of Spain.

His ministry began during a difficult time for the Spanish crown. Following a series of expensive foreign wars and a period of extravagant spending on an enormous new palace by the royal family the state coffers were heavily depleted and soldiers and civil servants often went months without pay. Wall immediately sought to address these issues, rehabilitate Spain’s reputation internationally and reform the national administration. He succeeded in reestablishing favorable relations with Great Britain, despite his personal support for the Jacobite cause, and managed to persuade the king to pursue and maintain a policy of neutrality in the Seven Years’ War.

Following the death of King Ferdinand in 1759 he was succeeded by his half-brother Charles who sought much closer ties with France than his predecessor. Wall, keen to preserve his policy of neutrality, was not in favour of this alliance but carried out the wishes of his sovereign. He remained Chief Minister for another four years, despite several attempts to retire. He finally managed to do so in 1763 by feigning an eye ailment and left Madrid for Andalusia where, among other things, he oversaw the restoration of the Alhambra in Granada.

During his tenure he built up a strong network of political allies and courtiers that kept him informed on the affairs of the kingdom (and of the machinations of his rivals) and elevated a number of fellow expatriates to prominent positions. The “Irish Party”, as they became known, included diplomats, soldiers, merchants, doctors and administrators, and they proved invaluable allies through his nine years as Chief Minister. In fact it wouldn’t be too much of an exaggeration to claim that, for a brief period, it almost appeared that Spain and its empire were effectively being governed by the Irish. The party and their wider network endured long after Wall’s retirement and helped to shape the fate of Spain for decades afterwards.