Why is Michael Flatley’s spy movie getting so much flak? 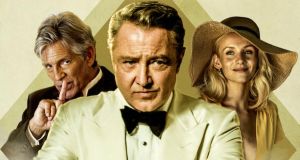 Eric Roberts, Michael Flatley and Nicole Evans in the poster for Blackbird, in which Flatley stars as a Bond-style secret agent. Only a privileged few have seen the movie – perhaps they’re holding it back for Cannes?

We’re an awful shower. In “these trying times” we waste valuable air slagging off blameless millionaires. Just look how we’ve laid into Bono. It’s an international thing. Gal Gadot and those other nice celebrities got nothing but grief after warbling Imagine by their ornamental koi ponds. It can only be a matter of time before we turn on the American dancer Michael Flatley.

There are already murmurings on the social.

“If Michael Flatley ever loved us, even a little, he’d release Blackbird,” a distinguished film writer from another newspaper tweets.

“In this, our time of need as a country, surely someone should reach out to Michael Flatley and tell him that Blackbird could cure our wounded psyches,” a senior figure from a national film institution agrees. The sarcasm is palpable.

Snide remarks have been oozing into the public domain since word of Blackbird first emerged two or three years ago. You know how these cynics operate. Without having seen a second of the US visionary’s debut feature, they have deemed it a vanity project. All this because Blackbird was largely self-financed and stars the Chicago sexagenarian as a “troubled secret agent”.

Flatley has already cleared this one up. “I didn’t finance it because I wanted to make a vanity project,” he told the Hollywood Reporter. “It would have just taken too long to raise the money, and I didn’t know what I’d be doing next year.” Does the American need to say it again? Not. A. Vanity. Project. Where do these “critics” get off?

Orson Welles (who was also from America) dipped into his own pocket – taking crummy acting jobs in crummier films – to finance such masterpieces as Othello and Chimes at Midnight. Blackbird has yet to go before a general audience. Yet the “experts” have decided that Flatley is a lesser filmmaker than the director of so-called Citizen Kane (which isn’t even in colour).

The plot has also come in for inexplicable criticism. The Internet Movie Database tells us that Blackbird concerns a retired agent who has set up a luxurious nightclub in the Caribbean to “escape the dark shadows of his past”. You people stupid or what? If that plot is good enough for Casablanca then it should be good enough for you. The American director also takes on the lead role. Always one to encourage younger talent, Flatley has gallantly cast Nicole Evans – “playing age 25-35 years” according to Spotlight – as the “old flame” who “reignites love in his life”. (I heard one wag quip “not that old a flame then”, but that’s just what you’d expect from a nation of begrudgers.) Patrick Bergin, who has been in no terrible films, and Eric Roberts, whom nobody regards as ill-served by his material, are also on the payroll.

The picture has, it must be admitted, travelled incognito since a poster emerged two summers ago. There was a private screening for cast and crew at the Stella cinema in Rathmines. A premiere seems to have happened at the Raindance Film Festival in London a few months later, but no formal reviews emerged from that intimate screening. Perhaps they were holding on for Cannes. Maybe Blackbird’s failure to appear in cinemas is down to it getting caught up in the Covid-related deferment of that event. Could it be the next Parasite?

The cohorts of snark who have been riffing on Blackbird during the current crisis allow no such generous interpretation. What else should we expect from a demographic stuffed with bleeding-heart liberals and “woke” Sandinistas? Flatley annoyed the snowflake tendency when he agreed to perform at the inauguration of his president. “This is a very special night and it is a great honour to be invited to be part of it,” he said before thrilling Trump with his frantic hornpipes.

Sometime later, he further infuriated that set by responding positively to a tweet regarding immigration from controversialist Gemma O’Doherty. “Well said Gemma,” his account enthused. The author Marian Keyes was among those responding with twisted knickers. “You really are phenomenally stupid, you plastic paddy. YOU are an immigrant,” she replied to hoots from those who view her as a National Treasure. (“Heads up: Michael’s Twitter is being run by Team Flatley,” the account now explains.)

We need to see Blackbird. We need to see it to humiliate the liberal smart alecks. Unlike those prejudging it, we do not expect an unintentional camp masterpiece that will play forever at midnight screenings before stoned students. We think it most unlikely that scenes will be endlessly recycled as ironic gifs on social media. We fully expect the American star to prove as adept with a Bondian comeback as he is agile with a treble reel.

Put us out of our misery. Release the Flatley cut.

Lady Gaga: Chromatica review – A star is reborn in this return to fully fledged pop
5

Harry Potter: is there a less appealing fictional character?
8