Brushing up on your high culture? Forgive my scepticism 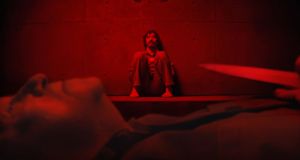 A scene from Galder Gaztelu-Urrutia’s film The Platform, a recent Netflix release – “a gloomy shocker set in a prison that operates like practical moral conundrum”.

A million years ago we rode on trains and drank beer in public places. Further ago than that we could communicate remotely only by letter or telephone. There was no easy way of telling the world you were working your way through Moby-Dick. You needed to occupy a relatively public place with the cover displayed prominently beneath corduroyed elbow. A decade or so ago, the streets of bohemia were packed with tiny-bearded men clutching spines painfully as they lugged copies of David Foster Wallace’s Infinite Jest from faux-rough bar to organic whelk stand. Doctors tell me the long-term lumber condition is now colloquially referred to as Lit Bro’ Syndrome. A million patient women – “This is the book I was telling you about.” – express no sympathy.

During the current crisis, we have been reminded how much easier it is to brag publicly about your tour of the Great Works. As the film industry swivels towards streaming options, this publication is among those working hard to make sense of the new realities. Our critical standards haven’t changed. We’re still recommending Brazilian proto-westerns alongside Disney Manic Pixie flicks. You get the perfect balance here.

Elsewhere, on the social media, the world is showing a similar balance between high and low culture. Sponsored tirelessly by the comedian Alison Spittle, the #CovideoParty habit, in which pals tweet along remotely to the same film, has dealt largely with popular cheeses from the 1980s and early 1990s. Stuff like Coming to America and Hook (Burlesque offered a rare venture into the current century). Meanwhile, readers are talking us through their marathon assaults on the masters of genre fiction.

There is, however, a fair amount of bragging going on as well. Look at me. Only a few days ago, I felt it necessary to inform the world I was listening to the Ring Cycle in my underpants (as Wagner intended). I’m telling you right now that, after leaving the narrator alone with an ailing Swann for a year or so, I am ready to embark on the second half of À la Recherche du Temps Perdu. At my age, you don’t need a pandemic to wonder if – appropriately enough – dread Time is running out to finish Proust’s shelf of bullet-stoppers.

The distinction here is that I’m telling the truth. You can trust me. Everyone else is lying about their committed assault on Middlemarch. Almost nobody in that continent-spanning book group is really grappling with Don Quixote. Heck, there’s a film. There’s even a musical version with Peter O’Toole. Watch that and spoof your way to glory.

I really have been watching the great films of Jean-Pierre Melville in between chapters of The Portrait of a Lady. Who is following through on their promise to sit through the collective works of Hungarian miserablist Bela Tarr? Not those people saying as much on #FilmInstagram. They’re all having a third go round Downton Abbey. These posts are the equivalent of standing in the Stoneybatter Shebeen with Infinite Jest poking from your most capacious pocket. You’re all charlatans.

All right, I’m not being serious here. We have no empirical evidence to confirm the truthfulness of claims to high-brow consumption. Maybe everyone is doing what they say they’re doing. We do, however, have one measure of what the Irish masses are streaming to their smart TVs. The recently-launched Netflix top 10 is the most peculiar of statistical entities. Veering wildly from one hour to the next, it offers little sense of a consistent mood. There’s dumb stuff. There’s less dumb stuff. There’s stuff that’s not in English.

A random snapshot on Wednesday afternoon will have to do. Jennifer Aniston and Jim Carrey, reliable stars from the end of the last century, occupy the bottom spots with respectively, Love Happens (why that?) and The Yes Man (really, why that?). Demonstrating something I can’t begin to speculate upon, the first three films in the Oceans franchise were also in the Netflix chart. Hotel Transylvania 2,  a random family option, made it in at number two. The Mark Wahlberg action comedy Spenser Confidential and the Melissa McCarthy comedy Spy secured mid-table space.

What was most surprising in this snapshot was the presence of Galder Gaztelu-Urrutia’s The Platform at number one. A few hours later, most everything had changed, but the high-concept Spanish horror film was still in the chart. The film is a recent Netflix release. Nothing else helps explain why a gloomy shocker set in a prison that operates like practical moral conundrum should resonate with audiences sheltering stressfully from a viral infestation.

We do, however, learn that, notwithstanding my cynicism above, punters are still making adventurous decisions about home entertainment. They’re watching bleak allegorical horror. They really are getting round to Cervantes and Fellini. Let’s believe everyone who says as much. That’s the least we can do.

Antonia Campbell-Hughes: ‘I like hard graft. That’s what I believe in’
9