There’s enough novelty to last a lifetime, but repeated viewing brings its own comforts 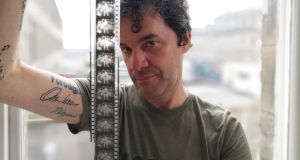 Belfast-born film expert Mark Cousins says he seldom watches a film twice, unless he is presenting it to an audience or if he wants to use a clip in a documentary. Photograph: Jamie Fry

I hope you enjoy this column. If you really, really like it (anything is possible) you may feel inclined to read it again. After all, that’s what we are doing now. We are re-reading beloved books, rewatching favourite films and rediscovering admired record albums.

One distinguished cultural boffin is, however, resisting the urge to plough familiar furrows. Mark Cousins, the indomitable Belfast-born film expert, has weathered the current crisis with characteristic good grace. Last week, he offered to finance 50 subscriptions to Sight and Sound, Mubi or similar cinema services for those short of funds. Meanwhile, he has devoted his spare time to investigating the films of 1940.

Buried in Mark’s article on that project, there is a statement that will count as a revelation to many movie enthusiasts. “I seldom watch a film twice,” he says. But that’s what buffs do. Right? We re-watch Red River often enough to count the tassels on Montgomery Clift’s shirt. Richard E Grant tells how, some years ago, he was disturbed by young people yelling the words “You terrible c***!” at him. It transpired they knew the script to Withnail and I better than he did.

Cousins told me he will re-watch a film if he is presenting it to an audience or if he wants to use a clip in a documentary. But he rarely goes back to a movie for entertainment.

“I re-watched Touch of Evil when Walter Murch redid it, and have seen The Holy Mountain a few times, and Grease – both for pleasure,” he said after some searching of brain. Let nobody suggest (nobody would) that his tastes aren’t eclectic: Alejandro Jodorowsky’s surreal fantasy and Randal Kleiser’s blockbuster musical aren’t often mentioned in the same paragraph. “I just don’t feel the need to revisit pleasures. I’ll have them always,” Cousins concluded.

There is a sound argument here. We could live as long as Olivia de Havilland and cut no more than a sliver off the films and books available for our perusal. Each time you re-read The Day of the Jackal you eat up time that could be spent on The Three Musketeers. There are, no doubt, arthouse fanatics who have seen The Holy Mountain 30 times, but who have never lowered themselves to watch Travolta romancing ONJ (still a hoot).

Though I yawned through All About Eve at 13, I now approach every repeated viewing with undiluted enthusiasm

It cannot, however, be denied that some books, films and TV series yield greater pleasures with each successive viewing (the brain engages so differently with music that it doesn’t belong in the same conversation). Vladimir Nabokov argued that the practical business of ploughing through the words on first reading of a novel inhibits full appreciation. “This complicated physical work upon the book, the very process of learning in terms of space and time what the book is about, this stands between us and artistic appreciation,” he wrote. There is less “physical work” with a film, but, on first glance, we will be more taken up with narrative – Who killed the chauffeur? How did Bill Holden end up in the swimming pool? – than with intricacies of editing or subtext.

Moreover, a cultural entity will change as we change. Many are the novels that, impenetrable to certain readers in teenage years, prove irresistible when that person has suffered the disappointments of middle age. Though I yawned through All About Eve at 13, I now approach every repeated viewing with undiluted enthusiasm.

Sometimes it’s the narrative itself that requires a going-over. Anybody who fully understood John Le Carré’s Tinker, Tailor, Soldier, Spy (book, series, or film) on first encounter deserves to be running MI6. Among the joys of becoming a stupid old geezer is, just a few years after seeing a film, the capacity to approach it again with large elements of plot forgotten. There’s a chauffeur? What now?

Sometimes, rather than the opportunity to tease out new threads, it is the re-embrace of well-remembered pleasures that draws us back to old favourites. Cousins’s approach shuts him off from the reliable balm of the comfort watch. During the ongoing pandemic, millions have returned to works whose very familiarity offers consolation. The world may be hurtling into deathly unknowns, but Bette Davis will always share a cigarette with Paul Henreid at the end of Now, Voyager. Despite three-quarters of the cast being mown down in the last act, The Great Escape retains the reliable reassurance of ancient myth. In some other dimension, Steve McQueen’s baseball is forever bouncing against the cooler wall.

It has always been thus. Kids urge parents to tell the same story over and over again. Religions thrive on yarns from the Iron Age. Novelty is essential, but The Fall got it right on Live at the Witch Trials. “We dig repetition,” Mark E Smith sang. “This is the three r’s: repetition, repetition, repetition.”