What will replace ‘western civilisation’?

Unthinkable: We’re at a point in history ‘between two civilisations’, argues Desmond Fennell 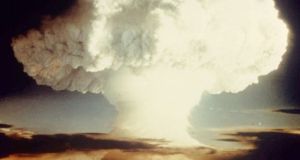 America’s failure to repent the use of the atomic bomb contributed to “the ending of the western Christian civilisation”, says Desmond Fennell. Photograph: US Defense Department/Reuters

What constitutes western civilisation has always been contested. When historian Kenneth Clark was commissioned for the BBC’s famous series on the topic in the 1960s he confessed: “I had no clear idea what ‘civilisation’ meant, but thought it was preferable to barbarism.”

Today, few people talk earnestly about western civilisation. Mahatma Gandhi’s jibe – “it would be a good idea” – has stuck. But the veteran critic Desmond Fennell believes it is a useful concept to try to understand where the world is going.

He argues that we are “between two civilisations”. Not just that but he believes a tectonic shift took place in the last century when the mask of western civilisation finally fell. In fact, he traces it to a particular date: August 6th, 1945, when the United States became the first country to use nuclear weapons – on Hiroshima and then Nagasaki – killing 130,000 people instantly and tens of thousands more through radiation exposure.

In Fennell’s understanding, this was a descent into barbarism from which the West has yet to recover.

A prolific author and essayist, Fennell – now in his late 80s – says he made the decision some time ago to stop looking at how the world should be and just describe how it is. Thus, he declines to pass judgment on whether “the end of western civilisation” is good or a bad. You decide, suggests Fennell, today’s Unthinkable guest.

What do you mean we are ‘between two civilisations’?

Desmond Fennell replies: “For a time it was customary to explain the political and social turmoil in the West as caused by the ‘populist’ risings against the ascendancy of ‘liberal political and cultural elites’. But the root cause of the continuing disorder lies further back: in a series of events and a non-event that began with the American nuclear massacres in Hiroshima and Nagasaki and culminated with the ending of the western Christian civilisation.

But can civilisations be so easily defined?

“A civilisation, we know from history, is a political-intellectual construct to which a large number of people adhere, which has a coherent set of values and rules derived from a venerated source - God, seer, lawgiver, holy man or the ancestors; in the European case God as interpreted by the Christian Church. The basic reason why a large number of people living together make themselves a civilisation is as a bulwark against chaos which they instinctively feel is inimical to man.

“Together the above-mentioned components of a civilisation enable its members to enjoy the fullness of their human capacity by seeing and feeling sense in life. That last quality is the decisive reason why the societies we have called ‘civilisations’, unless destroyed by suicide or external force, have lasted hundreds, even thousands, of years. If a political and intellectual construct lacks that critical quality, it presents, rather than a sense-making framework for life, a senseless life.”

Describe the turning point as you see it.

“When on August 6th, 1945, the American bomber crew was about to take off for Japan with its lethal cargo, official America, in the person of an air force chaplain, affirmed its adherence to European Christian civilisation by using Euro-Christian-speak to address a hybrid God of the Old and New Testaments in the following words: ‘Almighty Father, who wilt hear the prayer of them that love thee, we pray thee to be with those who brave the heights of thy heaven and who carry the battle to our enemies...’

“Subsequent to that formally blessed massacre, the nuclear bombing of Nagasaki took place on August 9th. While the meaning of the two massacres was still sinking in among the American people, public calls were made for president Harry S Truman to repent.

“The most forceful of those came in March 1946 from the US federal council of churches in a report signed by 22 Protestant religious leaders. ‘We would begin,’ they stated, ‘with an act of contrition’ and continued: ‘As American Christians we are deeply penitent for the irresponsible use already made of the atomic bomb.’

“The church leaders spoke on the common understanding that America was a Christian nation within western Christian civilisation and that within that comity of nations the Christian church determined what was morally right or wrong. Truman did not respond. The American failure to repent was the above mentioned non-event.”

How, as you see it, did western civilisation decline from there?

“As, through the ’60s and following decades, production of atomic and hydrogen bombs proceeded, official America paid heed to a group of intellectuals who called themselves left-liberals and who saw society as a godless collection of individuals rather than, as was previously the norm, a Christian community of communities.

“Official America’s embrace of ‘liberalism’ offered a parallel to the Russian state in 1917 drawing on the writings of Marxist-Leninist intellectuals to shape a godless, collectivist state policy. Later during the Cold War the Soviet Union propagated this ideology throughout occupied eastern Europe. America, with the aid of compliant mass media, propagated its godless individualistic liberalism throughout the West. Concomitantly, Christianity, which had provided the mind-and-will bonding force of western civilisation ceased to be lived or practised by governments and most people in America and, led by it, in western Europe.

“Here in the Republic of Ireland conforming legislation was passed. And the media practised conformity in detail, avoiding overt displays of Christianity. And recently a two-thirds majority in this predominantly Catholic country voted for the inclusion of abortion in the rights of citizens.”

What you’re talking about, though, is for many a necessary and welcome upheaval. Do you regard this civilisational change as good or bad?

“It is good to know where we are in history; I am simply pointing that out.”

Where do you see things going from here?

“The French Revolution wanted to end European civilisation but failed, Marxist-Leninist communism had the same aim but was anticipated by America’s leading the West into the intercivilisational situation in which the West now finds itself.

“After the fall of Roman civilisation in the West, European civilisation restored its Christianity and in continental western Europe its civil law. But a successor civilisation is not inevitably, even partly, a continuation of its predecessor.

“Michel Houellebecq in his novel Submission has dared to predict a Muslim future for France. And on present showing, a post-European civilisation, if it came about within 50 years or so, would be likely to have Islam as its principal religion in western Europe.

“At the opposite extreme of possibility is Chinese civilisation, which has seemed always to succeed itself in essentials regardless of the political regime. In short, the possibilities for us, or perhaps for our children’s children, are many.”

Tina Turner: ‘I had a terrible life. I just kept going. You just keep going’
8 The guarded words of Trevor Rees-Jones
9

Michael Kiwanuka: ‘If you’re a creative, you don’t try and be that, you just are’
10