A ‘third way’ of looking at religion

Unthinkable: Two dead philosophers could provide the key to a more mature debate on faith 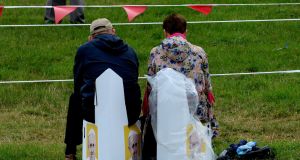 The visit of Pope Francis to Ireland has led to calls for a new type of dialogue between religious and non-religious people. Some Catholics claim to be “persecuted” because their views are robustly challenged. Some atheists take offence at the mere existence of faith-based organisations.

At the heart of this debate is how to understand religion: is it a kind of club in which you accept a set of metaphysical beliefs? Or is it a practice in which you show commitment to a way of life?

Pope Francis seems to be firmly in the latter camp, which is also where many secular philosophers reside. Two influential thinkers in this regard were the Dane Søren Kierkegaard (1813-1855) and the Austrian (and occasional Irish resident) Ludwig Wittgenstein (1889-1951). “Both Wittgenstein and Kierkegaard believe that religious belief is arational – that is to say, that it is neither rational nor irrational,” explains Genia Schönbaumsfeld who is speaking at the HowTheLightGetsIn philosophy festival in London this month.

Wittgenstein was heavily influenced by Kierkegaard, she says, and together they provide a “third way” of thinking about religion. Taking the Unthinkable interview chair on the column’s return, Schönbaumsfeld says: “Given the ascendancy of religious violence and fundamentalism in large parts of the contemporary world, such a ‘third way’ of conceiving of religious belief is more necessary than ever.”

How was Wittgenstein influenced by Kierkegaard on the matter of religion?

“Wittgenstein was extremely critical of other philosophers, but of Kierkegaard he once said, ‘Kierkegaard was by far the most profound thinker of the last century. Kierkegaard was a saint.’ This is an interesting remark, because Wittgenstein draws a link in it between being a profound thinker and being a saint, which constitutes a pithy way of summing up both his conception of philosophy and his view of religion as areas where it is impossible to draw a clear distinction between how someone lives and what it is that they believe.

“In other words, Wittgenstein shares with Kierkegaard the idea that a ‘profound thinker’ is not just someone who has ‘profound’ thoughts, but a person whose life expresses – or is emblematic of – these thoughts.

“For both Wittgenstein and Kierkegaard profundity has an ‘ethical’ dimension – it is not just the philosophical or religious content that is important, but also the way in which one is able to express this content in one’s life. This is the single most important idea that Wittgenstein takes from Kierkegaard: that Christianity needs primarily to be understood as a way of life, not as a set of theses to be followed as one might a doctor’s prescription.”

Can you explain how they reconcile religious belief with reason?

“Neither believes that it is possible to provide any empirical or scientific evidence for the existence of God, nor to give a compelling a priori demonstration. But neither thinker believes that this is necessarily a shortcoming as long as religious believers are honest about the status of their beliefs.

“What both Wittgenstein and Kierkegaard abhor are the kind of religious believers who cheat themselves into believing that there is evidence, and who then try to proselytise or coerce others into sharing their beliefs. Wittgenstein thinks that this is to turn religion into superstition and Kierkegaard that it is to turn Christianity into paganism; into the view that God or Christ could be directly perceivable if only one had the relevant perceptual equipment or were relevantly attuned to the supernatural.”

How credible are their respective outlooks?

“Wittgenstein and Kierkegaard continue to cause a lot of controversy, both among those who are critical of religion as well as among what one might call the religiously orthodox. According to those in the first camp, Kierkegaard’s and Wittgenstein’s conception immunises religious belief against rational criticism by holding that religion and science operate in different domains and aim at different things, and that one cannot, therefore, use science, in the manner of Richard Dawkins, for example, to try and disprove the content of religious claims.

“The religiously orthodox, on the other hand, tend to think that anything other than a broadly literalist construal of the meaning of religious language eviscerates it of content. These criticisms are, of course, mirror-images of each other and both presuppose a simplistic conception of language and meaning – namely, that unless a religious claim can, in some sense, be taken ‘literally’, it cannot have substantive content. Or, unless a substantive or noun – such as the word ‘God’ – refers to some in principle perceivable entity, it is empty of content.

“Kierkegaard’s and Wittgenstein’s views challenge these assumptions and present an interesting and credible alternative to conventional ways of thinking about religion...

“Religious belief is not a rival scientific or metaphysical theory, but a personal way of making sense of the vicissitudes of life. As Kierkegaard says, there can be no objective certainty regarding religious claims; to have faith is to be out on 70,000 fathoms of water – alone, one might add, and not in sects – and still to have faith.”

* Genia Schönbaumsfeld is appearing at HowTheLightGetsIn, billed as the world’s biggest philosophy and music festival, in London on September 22nd-23rd. howthelightgetsin.org