Metallica to play Slane Castle in 2019 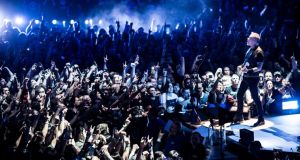 Metallica: the band on the indoor leg of their WorldWired tour, in February. Photograph: Simon Hofmann/Getty

Metallica will play Slane Castle on June 8th next year, it has been confirmed. They will be the second hard-rock act in a row to headline the outdoor venue, after Guns N’ Roses’ sold-out performance last year.

It will be Metallica’s first concert in Ireland since they played in Belfast in 2010 and Dublin in 2009. They were unable to bring the first, indoor leg of their WorldWired tour to Ireland this year because of the size of their stage show.

The Slane announcement was made at the Co Meath castle on Monday morning. Lord Henry Mount Charles, whose family has lived there since 1703, said the thrash-metal band had long wanted to appear at the venue. “There have been some logistical considerations over the last number of years. Metallica’s aim was to play Slane. I’ve only got one slot a year. Everything kind of fell into place.”

Denis Desmond of the concert promoter MCD said the band, who now play no more than 50 shows a year, had rescheduled their tour to play Slane on a Saturday. They will be supported by Ghost and Bokassa. Tickets, which go on sale at 10am on Friday, will cost from €89.50.

It is a measure of Metallica’s appeal that a band from the extreme end of an extreme genre could even attempt to play a venue as big as Slane Castle. They established their reputation with the first four albums they released after forming in California in 1981: Kill ’Em All, Ride the Lightning, Master of Puppets and ...And Justice for All.

Master of Puppets, one of the great heavy-metal albums, was their last with the bassist and arranger Cliff Burton, who died when their tour bus crashed in 1986. Burton, who admired Johann Sebastian Bach, was strongly influenced by classical music; the complexity of Metallica’s songs belies the limitations of their genre.

The band have been embraced by the classical world: in 1999 they recorded a live album with San Francisco Symphony Orchestra, and in 2014 they performed with the pianist Lang Lang at the Grammys. They have also inspired Apocalyptica, a Finnish “cello metal” group who originally formed as a Metallica cover band, and the Mexican classical-guitar duo Rodrigo y Gabriela.

Metallica’s most successful record is their self-tilted fifth album, aka the Black Album, from 1991, which last week became one of only four records to have spent 500 weeks on the Billboard 200 chart in the United States, where it has sold 17 million copies.

The band’s fans are notoriously sniffy about the album, however, believing there must be something suspect about a record that the general public could embrace in such numbers. As one fan put it online, he does not want to go to Slane to stand in a field with people whose knowledge of Metallica stretches from Enter Sandman to Nothing Else Matters – the album’s opening tracks.

In 2000 the band were pilloried as a musical behemoth taking on the little guy when they sued the file-sharing service Napster for copyright infringement and racketeering. The band’s drummer, Lars Ulrich, became, by his own admission, “the most hated man in rock’n’roll” as they accused Napster of allowing more than 335,000 fans to illegally give each other copies of the band’s music. Metallica prevailed, and Napster eventually filed for bankruptcy.

Is it risky to ask a thrash-metal band to headline Slane? Two years ago the National Concert Hall asked Irish adults what their favourite type of music was, and to score it from one to 10. The most popular genre by far was rock music, with 40 per cent rating it between eight and 10. Heavy metal had an 18 per cent rating – but ranked joint third as the genre that fans gave 10 out of 10 to.

That about half of Irish adults (allowing for overlap) are rock and heavy-metal fans might explain how Guns N’ Roses sold out Slane in a day last year and why MCD believes Metallica are worth a punt on June 8th, 2019.

35 of the best independent bookshops in Ireland
8