Was Ireland’s most prominent philosopher ‘too womanly’?

Unthinkable: The Irish statesman Edmund Burke was a victim of reverse sexism 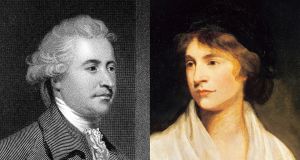 The 18th-century author and statesman Edmund Burke was never going to end up featured on posters in student bedsits or invoked by trendy opinionators. Yet the lack of public knowledge today surrounding Ireland’s most prominent political philosopher is strange.

As a critic of radicalism, he became known as the father of modern conservatism, and this accounts for some of his unpopularity among liberals. But Burke was no right-wing mouthpiece, and his promotion of incremental political reform seems highly prescient when judged against subsequent revolutions in Europe.

A black mark typically held against Burke, who was born in Dublin in 1730 and was a cousin of Catholic educator Nano Nagle, was the way in which he clashed over the merits of the French revolution with Mary Wollstonecraft, the English writer who became a prominent defender of women’s rights.

Folk history decrees that Wollstonecraft was the plucky feminist going up against the establishment man but the truth is more complex, as Katherine O’Donnell explains. Associate professor in the history of ideas at UCD School of Philosophy, she says Wollstonecraft initially attacked Burke on the grounds that he was “too womanly”.

Presenting herself as the rationalist answer to Burke’s emotionalism, Wollstonecraft played on masculine, British sentiment to impugn the Catholic, Irish – and therefore suspect – character of her opponent.

Burke had also famously argued against criminalising sodomy, “an argument he hadn’t won”, O’Donnell recalls. Whether or not Wollstonecraft was trying to remind her readers of this “effeminate” or “sodomitical” stance by the Irishman, O’Donnell says: “Wollstonecraft uses a sexist and nationalistic rhetoric to announce her voice as she attacks Burke.”

O’Donnell, who took part in this month’s Society of Women in Philosophy (SWIP) Ireland annual conference in Dublin, is today’s Unthinkable guest.

Can you describe the general reaction to Burke’s open letter Reflections on the Revolution in France in 1790?
“Burke created consternation with his passionate and lengthy denunciation of the French Revolution as most people in Britain at that time viewed the French people as being oppressed by the despotic Bourbon monarchy and they were happy to see them throwing off the yoke of tyranny.

“The British public generally expected that the French would become more like them, with a monarchy that was curbed by a parliamentary constitution. The initial weeks and months of the French Revolution were largely cheered on by their longstanding ‘frenemies’ across the channel.

“Wordsworth encapsulated the general British view when he wrote: ‘Bliss was it in that dawn to be alive...’

“Burke was prescient in prophesying the revolution would logically develop into dictatorship but the warnings of the Reflections seemed fantastic and were welcomed only by the most ardent royalists in Britain, which was a much smaller contingent than we might find today.

“Burke’s Reflections was generally regarded as a bizarre outburst which supported the interests of aristocrats and hereditary monarchy, an outburst that was all the more bizarre as Burke’s political career was spent leading the most liberal and critical charges against the vested interests of King George III.

“Moreover, before and during the American War of Independence, Burke represented the views of the American colonists and argued that the British Crown should conciliate.”

How did Mary Wollstonecraft respond?
“Her pamphlet, A Vindication on the Rights of Men, was speedily published and was the first popular response to Burke. Wollstonecraft’s reading of Burke articulated arguments which were followed by many others, perhaps most notably Tom Paine’s Rights of Man published over a year later.

“Wollstonecraft’s response to Burke lays charges against his Reflections and his earlier aesthetic treatise on the sublime and beautiful which still colour reception of Burke today - and indeed act as a barrier to many progressive thinkers from bothering to engage with Burke.

“Wollstonecraft’s Vindication was initially published anonymously but when her identity as author became known she had a new-found celebrity that was to pave a platform for her most influential work: A Vindication of the Rights of Woman (1792), which is commonly regarded as one of the first English articulations of modern feminism.”

In what way did Mary Wollstonecraft play the gender card to bolster her argument?
“Wollstonecraft starts her attacks by ignoring Burke’s long decades as a liberal, critical political orator and addresses him as the author of a treatise on the aesthetics of the sublime and beautiful which he had published as a young man.

“She writes: ‘All your pretty flights arise from your pampered sensibility; and that, vain of this fancied preeminence of organs, you foster every emotion till the fumes, mounting to your brain, dispel the sober suggestions of reason . . .’

“Wollstonecraft assumes the voice of the cool, clear rationalist and depicts Burke as the crazy, emotional, effeminate whose Reflections defended ‘profligates of rank, emasculated by hereditary effeminacy’.

“However, Wollstonecraft’s gender attack on Burke was not merely another attack that associated the Irish, crypto-Catholic, oriental-loving Burke with effeminacy and sodomitical practices.

“It seems that the prime motivation for Wollstonecraft’s depiction of Burke’s non-British baroque effeminacy was to announce her own rational masculinist British voice to create a platform for her ‘common sense’ voice to be heard in the public sphere.

“The public space in Enlightenment Britain was not a receptive place for a woman’s voice or perspective and Wollstonecraft’s Vindication brought her acclaim, not least as she was a woman who had roundly trounced Burke for his hysterical response to the egalitarian ideals of the French Revolution.

“Moreover, Wollstonecraft’s Vindication performed a brilliant manoeuvre rarely achieved in feminist writing in that she managed to present feminist arguments as representing the rational perspective of the majority mainstream rather than an impassioned pleading by a fringe special-interest group.

“Wollstonecraft depicted Burke’s feminine sentimentality as representing the privileged few, she accused him of ‘ambition’ for the grace and favour of the elite - thus violating the code of the bourgeois public sphere for ‘disinterested’ rationally engaged debate on truth and the common good.

“In giving an immensely influential misreading of Burke’s treatise on the sublime and beautiful where she accuses him of making beauty synonymous with woman and both characterised as ‘little, smooth, delicate, fair’, Wollstonecraft - quite unfairly - sets up Burke as the paradigm of the misogynistic patriarch.

“Wollstonecraft ignores that Burke’s treatise addressed beauty as a characteristic of both men and women and depicts Burke as giving vent to the same loathing of women that Hamlet gave in his madness; falsely claiming that Burke mandated that women must ‘learn to lisp, to totter in their walk, and nick-name God’s creatures’.

“Wollstonecraft even asserts that Burke sought to prove that women had no souls. She argues that emotional Burke... causes offence and damage to ‘real’ women’s interests; that only empty headed ‘fashionable ladies’, scheming in the marriage market, follow Burke’s vacuous beauty programme and that the majority of real - that is middle-class and not the ‘vulgar’ - women are virtuously rational, imbued with common sense.”

Had Wollstonecraft a particular type of feminism in mind then?
“Wollstonecraft’s riposte to Burke was a rehearsal for what would become the central arguments of The Vindication of the Rights of Woman – that middle-class women are the most deserving of respect but that they need a liberal education which could allow them to assert their rational capacities and free them from the perils of making themselves into ornamental objects.

“If this class of women was to be elevated to equality with bourgeois men they would act as a corrective to the excesses of the profligate upper-class women and they could control, manage and mould the lower servant-class women.

“Wollstonecraft loathed her status as an ‘upper servant’ when she was governess to daughters of the Irish aristocrat, the Earl of Kingston and his wife Lady Caroline Fitzgerald, one of the wealthiest heiresses in Ireland and first cousin of the revolutionary Lord Edward FitzGerald. Wollstonecraft’s acid views of the fashionable femininity of aristocratic women were based on her close observance of Lady Caroline who liked to introduce Wollstonecraft to the high society she entertained at Michelstown Castle and at their newly built townhouse in Merrion Square.

“While many of us might not be perturbed by Wollstonecraft’s animus for the ostentatious displays of feminine aristocrats, we might find disturbing Wollstonecraft’s contempt for women of the lower servant classes, which is to be regularly observed in her work.

“Wollstonecraft’s attack on Burke becomes the launch pad for a tract that set the liberal feminist agenda for generations. However, its promotion of middle-class women’s interests as paramount – with concomitant distain for displays of femininity and low-born and uneducated women – might also be regarded as a legacy that needs careful attention.”