Review: Three friends set out to lose their virginity on prom night. Then mom finds out 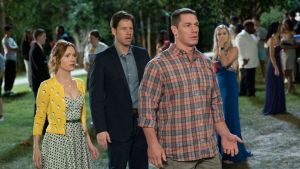 There’s a telling moment in the later stages of the amusing film that’s not really called Blockers. One of the young high-school students, preparing for a first sexual encounter, scatters rose petals about a bed in the style, it is explained, of the “romantic comedy” American Pie. Can he have watched that film all the way through?

There is an acknowledgment here of the waters through which the film is swimming. Here is another comedy about teenagers losing it.

But this one is smart enough to know there’s a laugh to be had in playing fast with genre classification.

If you’ve seen a bus in the last week or so you’ll have some idea what the film is really called. The promotional material places a male chicken in front of the word “Blockers”. No, it’s not called Rooster Blockers. Keep up.

It is the week of the prom and three old chums decide that they will lose their virginity after the dancing has ended. When a computer chat is left open – as if any kids would be so dumb – their parents learn of the plan and set out to stop all the sexing. They are, if you will, the Rooster Blockers.

Directed by Kay Cannon, co-creator of 30 Rock and Pitch Perfect, the film is admirably economical in the delineation of its characters. Cool Kayla (Geraldine Viswanathan) has her eye on the most boring of all bores – more boring even than the wine bore – the local drug bore.

Julie (Kathryn Newton) intends to finally do the deed with her long-term squeeze. Sam (Gideon Adlon) is a centimetre away from realising she’s gay.

Leslie Mann is much less annoying than usual as the most needy mom. Former wrestler John Cena has the chops for an uptight butch dad. MVP of the seniors is, however, Ike Barinholtz as a loser trying to make good.

The film sets itself apart from most high-school shag comedies by focusing uncritically on female sexuality even as it relishes the dads’ discomfort with that topic. “Why is sex even bad?” someone says, casually encapsulating the dilemma at the heart of so much American comedy.

The routines are hit and miss but when they work – watch out for a rollicking subtitled bit – they properly tear the roof off.

It all ends safely. A compromise is reached. No barriers are breached. But there is enormous fun to be had on that journey to a familiar resting place.

Blockers is in cinemas from March 30th