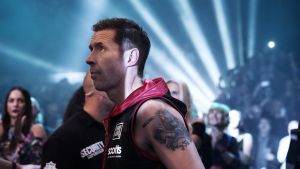 Tyrannosaur, Paddy Considine’s award-winning directorial debut, opened with the film’s troubled, drunken protagonist (a fearless Peter Mullen) kicking his own dog to death. It’s a little ironic that Journeyman, a boxing movie and his second feature, isn’t quite so hard-hitting.

The film concerns Matty Burton (Considine), a boxer who is greying around the temples and at the end of his career. A cool-headed, contented fellow, he’s daft about his wife, Emma (the new Doctor Who, Jodie Whittaker) and dotes on their baby daughter. He’s the perfect opponent for Andre Bryte (Anthony Welsh), the brash young hot-head who is Matty’s opponent in his last title fight.

This is going to be a life-changing fight, promises the trash-talking newcomer. He’s correct, but not in the way that he thinks.

The more experienced boxer wins the bout, but collapses in his living room after he returns home. His head injury, a delayed response to an earlier punch, leaves him struggling to walk, to make a cup of tea, and prone to bursts of genuinely terrifying rage.

It falls to Emma and, in time, Matty’s old training buddies, (Tony Pitts and Paul Popplewell) to patiently facilitate his rehabilitation.

Journeyman initially seems to belong to the same gritty subgenre of British boxing movies as last year’s Jawbone: a film where the community gym is Mecca and where there’s absolutely no danger of seeing Donald Trump or Charlie Sheen in ringside seats.

But Considine’s drama evolves into other things. It’s a sustained salute to carers, and a shout-out to close friends and family. Indeed, the film suffers a setback when Whittaker disappears from what was initially an emotionally engrossing diptych. It’s a careful study of head trauma, one that ought to be viewed alongside Lucy Walker’s The Crash Reel or Edward Lovelace and James Hall’s The Possibilities are Endless.

At times, the male friendships in the film – though seldom defined by demonstrative declarations – make one think of a kitchen-sink, gender-swapped Steel Magnolias. There’s a sense, too, of melancholia and acceptance among Journeyman’s boxing community regarding Matty and his injuries. This is a film that loves boxing but is not afraid to acknowledge its dangers.