Isle of Dogs: A five-star movie that doesn’t put a paw wrong 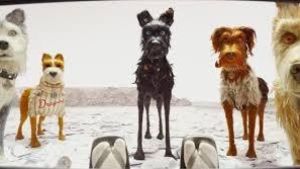 In a futuristic Japan where Akira Kurasawa’s 1960s gangsters might have felt very much at home, the thuggish, totalitarian Mayor Kobayashi – the descendant of a long line of cat fanciers – uses an outbreak of snout fever to justify the banishment of all canines.

The puppers and doggos of Megasaki City are accordingly rounded up and dumped on Trash Island. Here, the mutts scrap in marvellous cotton wood dust-ups and struggle to survive on maggoty morsels.

Back in the city, there are dissenters. Professor Watanabe and his assistant (Yoko Ono) are frantically working toward a vaccine for snout fever. Tracy Walker (Gerwig), a rabble-rousing American student and high school newspaper contributor, is determined to expose the corrupt, feline-aligned mayor.

And Atari Kobayashi, the mayor’s orphaned ward, steals a plane and crash lands on the titular atoll, in search of his beloved canine companion, Spots.

Clear your diary. Wes Anderson is on a winning streak. Following on from the wonderfully whimsical shaggy dog story The Grand Budapest Hotel comes an even shaggier dog story, in the literal sense. The family strife at the heart of Fantastic Mr Fox was rather more convincing than the squabbling siblings of The Darjeeling Limited.

So it’s not too startling to discover that Anderson’s second adventure in stop-motion animation is his warmest picture to date. Even the homophonic title is a declaration of affection.

The licensing and merchandising departments of 20th Century Fox may not be feeling the love. The Texan auteur’s scruffy stars are closer to the eerie, scratchy creations of Jan Švankmajer than they are to Paw Patrol.

Aesthetically and thematically, Isle of Dogs is Anderson’s most ambitious feature to date. The film’s unabashed Japanophilia makes for a riot of sushi, noh drums, kabuki theatre, sumo wrestling and, well, Yoko Ono.

The contributions of several veteran Japanese actors and Kunichi Nomura (who co-wrote the story with Anderson, Roman Coppola and Jason Schwartzman) and the love that has been lavished on every tiny, hand-crafted detail, allows for a free pass on any charges of cultural appropriation.

There is much to savour here: the Bogey-Bacall banter between Chief and a sultry show-dog named Nutmeg (Johansson), a score from Alexandre Desplat that zig-zags between The Seven Samurai and Prokofiev, an anatomically-precise recreation of a kidney transplant, an Ukiyo-e overture.

A most impressive voice cast are given the opportunity to play around with what they do best: Greta Gerwig is a woke Ladybird. Harvey Keitel is the gnarled, scarred sometime-experimented on wolf-dog. Jeff Goldblum is a hilarious gossip who begins every utterance with: “You’ve heard the rumour”.