Whistleblower Christopher Wylie, who helped set up data analytics firm Cambridge Analytica, says that he believes the company developed techniques capable of having an impact on elections. Video: Reuters 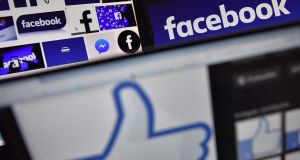 Facebook said on March 20th it is ‘outraged’ by misuse of data by Cambridge Analytica. Photograph: Getty Images

Mark Zuckerberg has admitted that Facebook “made mistakes” in its dealings with Cambridge Analytica as one of the social media giant’s former employees told MPs it had lost control of its user data.

In a message on his Facebook page, Mr Zuckerberg said there had been a “breach of trust” between app creator Aleksandr Kogan, Cambridge Analytica and Facebook. But he acknowledged it was also a breach of trust between Facebook and its users.

“I started Facebook, and at the end of the day I’m responsible for what happens on our platform,” he said.

Cambridge Analytica, a political consulting firm that worked on Donald Trump’s 2016 election campaign and the Brexit referendum, is accused of harvesting the personal data of millions of Facebook users and using it to inform its campaigns. The company suspended its chief executive, Alexander Nix, after Channel 4 News filmed him boasting about how the firm used entrapment techniques against clients’ political opponents.

Dr Kogan, a Cambridge academic who created a personality test app that harvested data from Facebook users, which he passed on to Cambridge Analytica, claimed on Wednesday that he was being scapegoated.

Mr Zuckerberg said that Facebook would investigate all apps that had access to large amounts of information before the platform was changed “to dramatically reduce data access” in 2014. The company will conduct a full audit of any app with suspicious activity, ban any developer that did not agree to a thorough audit and ban developers that had misused personally identifiable information.

He promised to restrict developers’ data access further in future and to reduce the data that users give an app when they sign in to just their name, profile photograph and email address

Sandy Parakilas, a Facebook platform manager until 2012, told Westminster’s digital, culture, media and sport committee that Facebook’s failure to monitor third-party apps could have allowed user data to be acquired by data brokers.

“Facebook didn’t want its data to go to data brokers, but their primary motive was to motivate the huge ecosystem of apps in the fastest way,” he said. “There were people like me saying it could go to data brokers, I think it was a risk they were willing to take.”

Mr Parakilas said that personal identifiable data was allowed to leave Facebook and “was not really controlled”.

Theresa May on Wednesday faced questions about the Conservative party’s links to Cambridge Analytica when the SNP’s Ian Blackford said its parent company SCL had been run by a chairman of Oxford Conservative Association.

The prime minister said the government had no current contracts with Cambridge Analytica or with the SCL group, although her official spokesman said three government departments had worked with them in the past.

“It’s absolutely right that they are properly investigated and the information commissioner is doing exactly that. People need to have confidence in how their personal data is being used,” said Ms May.