Why Leo Varadkar fails the rule of 72 maths test

Three years after vowing to double Arts spending by 2024, the Government is already a year behind 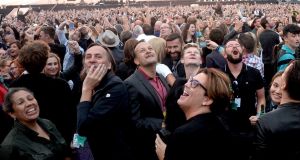 The rule of 72 is a method used in finance to roughly calculate the annual percentage increase needed to double a sum of money within a set time. It tells us that, to achieve such a doubling in seven years, an annual increase of 10 per cent is required. Obviously, if, in any year during that period, the increase is less than 10 per cent, bigger increases will be required later.

Compared with some of the complex algorithms applied by the Department of Finance this week to calculate the impact of Budget 2020, this is incredibly simple stuff. So when, in May 2017, the Fine Gael leadership contender Leo Varadkar announced that if he became taoiseach he would oversee the doubling of State expenditure on culture within seven years, he knew exactly what was required.

The budget announced this week is the Taoiseach’s third. So how’s he doing?

Let’s be realistic. The target will not be achieved and the promise will not be kept. The scepticism with which the commitment was greeted has proved well founded

Here are the numbers. Budget 2017 allocated €158.3 million to culture, which set Varadkar a target of €316.6 million by 2024. To be on track, spending in Budget 2020 should have been 33.1 per cent ahead of 2017. Instead it’s only 21.7 per cent up, at €192.7 million. This effectively means that in just three years the Government has already fallen a year behind schedule. It also means that increases of significantly more than 10 per cent a year will be required to catch up.

In recent months, and at her budget briefing on Thursday, Minister for Culture Josepha Madigan referred to the target date as 2025, contradicting the original time frame and, therefore, amounting to a clear failure to hit the target. So let’s be realistic. That target will not be achieved and the promise will not be kept. The scepticism with which the original commitment was greeted in many quarters at the time it was made has proved well founded.

Well, duh, you say. “Politician fails to keep promise” is not a startling headline. My colleagues on the Irish Times political staff point correctly to the strains and pressures and begging bowls that every minister for finance faces at budget time, particularly at moments of crisis such as the current Brexit mess. And more than 20 per cent over three years is not bad, is it?

But when Varadkar made his statement, back in May 2017, and reiterated it several times in the months that followed, he was aware, as any politician would be, of the role of the contingent and the unexpected over the course of any seven-year period. So why make the commitment in the first place?

There seem to me to be only two possible answers. The less cynical one is that, buoyed by the success of public events and initiatives around the centenary of the Easter Rising of 1916, senior figures in the Government were persuaded that it was time to start redressing the shortfall in support for culture that has characterised the entire history of the State. Add the fact that the sums of money involved, in relation to overall expenditure, were relatively small and the commitment might have seemed achievable – at least until it ran into the brick wall of budgetary realpolitik and how that plays out in the Irish political system.

Far from meeting the commitments stated so loudly three years ago, the Government has made sure that those who bear the brunt are the people who actually create art

The second, more cynical view, which I heard being muttered during the all-singing, all-dancing presentations that characterised the rollout of the Government’s Creative Ireland programme, was that the whole thing was all fur coat and no knickers, a series of choreographed photo opportunities and empty promises. For that to be true implied a chilling level of contempt for the sector and a fundamental lack of seriousness.

Which of those two interpretations now looks more plausible?

One further factor needs consideration. There has been tension since the start of this process between support for cultural institutions and education on the one hand and support for actual working artists on the other. Both, of course, are vital. But the question of whether the Arts Council, as the primary vehicle for supporting artists, should see its funding rise at the same rate as the overall budget has been the cause of some contention.

And, this year, the news on that front was terrible. Not only was the 10 per cent increase – about €7.5 million, in other words – that the Arts Council’s new chairman, Kevin Rafter, told The Irish Times he anticipated not reached. The €5 million “increase” announced was mostly taken up by the reallocation to the council of existing Department of Culture activities. In other words, not an increase at all.

So, far from meeting the commitments stated so loudly and proudly just three years ago, the Government has failed the most basic mathematical test it set itself, and in the process has made sure that those who bear the brunt of that failure are the people who actually create art in Ireland.

Love Island: This pair are €60k richer. The rest of us feel much worse off