‘Totally different to creating work for adults’: Theatre makers on working with children 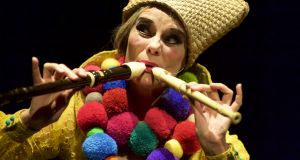 Baba Yaga will take place as part of Baboró, in the Town Hall Theatre for 7-13 year olds

In 2016, Belgian theatre maker Milo Rau made a piece of theatre about Marc Dutroux, the Belgian paedophile and murderer who kidnapped six young girls in the 1990s. The subject matter was disturbing, but Rau’s interest was not prurient. The Dutroux case offered a way of exploring the way extreme events can impact upon national conscience. What was perhaps more controversial was the fact that Five Easy Pieces was performed by 7 children under the age of 12.

Rau is just one of the artists that Irish actor and theatre-maker Shane O’Reilly spoke to over the last 12 months in the course of his research into the practice of making theatre with young performers. O’Reilly was participating in PUSH+, a Creative Europe co-operation project which aims to stimulate European dialogue and initiate new artistic ideas and performances for young audiences. O’Reilly began to observe a distinct difference between the way in which difficult subject matters were being explored in Europe, and the way in which young performers were being engaged as key participants in the creation of this work.

In work like Rau’s, “children were taking an active role in performing stories that were about them. Sometimes that involved troubling subject matter. Sometimes, like in the case of dance company Kabinet K, it involved giving children full responsibility as ensemble members: they would have to be able to do a lift and take the weight, same as any other dancer.” In both cases, “it was like nothing you would ever see in this country”.

O’Reilly will be presenting the full findings of his research this week at the annual Baboró International Arts Festival for Children, where 14 Irish and international theatre companies have gathered to perform their work for school children and families. The diversity of their artistic approaches across the performing arts is particularly striking: from interactive dance pieces for an early-years audience (Théâtre de la Guimbarde’s Cache Cache from Belgium) to participative sensory work for toddlers (Le Vent Des Forges’ Não Não from France) to documentary drama for teenagers sourced from the testimony of their peers (Prime Cut Northern Ireland’s Removed). However, the programme also includes several panel discussions, workshops, and presentations like O’Reilly’s, which lay testament to the burgeoning interest in and professionalisation of theatre for young audiences in Ireland.

CoisCéim are one of the Irish companies participating in this year’s festival with a new show that emerged out of the company’s residency at the Festival last year. CoisCéim’s first experiences for creating work for young audiences was at Baboro, where choreographer David Bolger debuted the internationally acclaimed The Wolf and Peter in 2015.

This year Bolger premieres a new work, Francis Footwork at the Mick Lally Theatre, which was developed during the residency. Bolger says his approach to creating work for young audiences has evolved in the years between the shows: “it is only by making work for young audiences that you come to understand how to do it, what works best. We did more than 70 shows of The Wolf and Peter and I spent a lot of time observing the audiences, looking to identify the points where they get interested, where they get bored, where they just want to sit back.”

With Francis Footwork, “I wanted to make something with dance as the starting point for the story”, but that came with its own challenges: “how do you find the narrative structure in dance.” Bolger settled on a storyline in which dance was banned, and a heroine who was fighting to keep her only mode of self-expression. However, he “brought children in at a very early stage of development, where we presented our ideas in a very rough way, and it was eye-opening. After our first showing we actually did a complete u-turn on one of our ideas.” Since then, the work has had two further outings in front of young audiences, “so by the time we actually got to the rehearsal stage of the show, we were already very engaged with what an audience might make of it or take from it.” It is a “very unique way of creating a work,” he says, “and totally different to creating work for adults.”

This certainly chimes with O’Reilly’s findings, both from what he has observed from his research and from his own experience. “There are so many different factors that need to be taken into account” when making work with or for children, he says. “There’s the legality around it: do the children get paid? If they do, they are subject to child employment laws so they can only work a certain amount per day, and that has a huge impact on the rehearsal period and process of making work.” In a commercial context, for example, several children would alternate in the performance schedule: “you can’t expect children to have the same stamina or focus as an adult performer.”

Practical issues aside, “there is also the social and ethical side of things. What does it mean to ask children to participate? How can you challenge a young audience safely?” These last two questions are driving the work that O’Reilly is currently engaged in as a theatre-maker. In 2020, he will put his research into practice by creating a theatre piece constructed around the participation of a child in both the process and performance of a new work at Nenagh Arts Centre, where he currently holds a theatre residency. At the same time, he hopes to bring a new musical about same-sex families to the stage.

“There is so much protection around content when you are making work for young audiences,” he concludes, “especially in Ireland, but it is really important that we make work that challenges the norm, and that reflects the diversity of lives that children live too; they need to see that reflected on stage.”

Bolger agrees: “the real consideration is how will you do that? You can’t just offer up [something difficult or controversial] and hope for the best. You have to act as their guide through it.”

Baboró International Arts Festival for Children takes place from October 14th-20th in a variety of venues in Galway. See baboro.ie