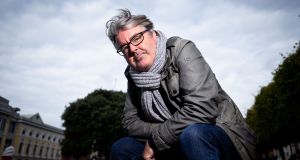 Stephen Bradley: ‘It all happened so suddenly, it was pretty surreal.’ Photograph: Tom Honan/The Irish Times.

It’s a widely held belief that moving house is one of life’s biggest stresses: add in relocating to an entirely different country, promoting a film internationally, meeting project deadlines and teeing up new work opportunities into the mix, and it’s bound to feel wearisome.

In the week that film director Stephen Bradley moved home to Ireland from the UK, he was also tasked with pulling together last-minute sketch inserts for the Irish Film and Television Academy awards, which his wife, comedian/actor Deirdre O’Kane, was hosting that year. A health crash was perhaps inevitable.

“I thought I was just exhausted,” Bradley recalls. “Which, in retrospect, was kind of naive.”

Yet the move home, Bradley notes, ended up saving his life. Within three weeks of landing back in Ireland after a decade in the UK, the vagaries of work and relocating ebbed. Bradley and O’Kane were thrown headlong into a new crisis: he was diagnosed with stage 4 bowel cancer in 2016, which had spread to his liver and, in time, would move to his lungs. And, as most people are all too aware, there’s no such thing as stage 5 cancer.

On hearing the stage 4, did he think of death, or that great euphemism beloved of doctors, getting one’s affairs in order?

“I did at the very beginning,” he admits. “I was waiting for the first surgery and that was really hard. I was in a single room and spent a lot of time in my own, and it’s the worst because you’re in your own head so much. But it all happened so suddenly it was pretty surreal.”

Previously, Bradley had been given a clean bill of health during an extensive check-up in 2012: “I did all the testing you can – colonoscopy, ultrasound, blood test. My oncologist said that by the time [the cancer] was discovered, I’d already had it for 18 months at least.”

Bradley’s care plan included a sizeable liver operation, followed by a succession of minor procedures, as well as chemotherapy and immunotherapy. He was told by his care team that recovery would not be impossible, but it would be a long, labyrinthine road. Bradley had qualified for an immunotherapy drug trial via the Health Service Executive; a drug that, at the time, was not available on the British National Health Service. Though the drug is now available in the UK, Bradley doesn’t believe he would have survived cancer had he been living in England.

It’s just one of several remarkable coincidences that Bradley outlines in his memoir, Shooting & Cutting. By turns personal, humorous and insightful, the book details his account of struggling towards good health. There are moments, emotions and truisms that anyone affected by serious illness will relate to. Spoiler alert: three years later and after a gruelling treatment path, Bradley is cancer-free, feels energised and ready to return to the professional fray.

And yet he and O’Kane, despite the surreal situation in which they found themselves, managed to keep a degree of normalcy throughout the illness. They decided not to tell their children, Holly (14) and Daniel (15), the specifics until “quite late in the day”.

“We were just trying to make it normal, like dad’s in bed most of the time and might come down to watch a bit of telly and he doesn’t have much energy and is going off for these operations,” says Bradley. “The kids had new schools, and new friends, and kids are very adaptable I think. It was the right thing for us not to worry them. My sister [Fiona], who was a doctor, died aged 41 in 2002 and that was the only thing they knew about cancer.”

Given the family’s experience with Fiona, telling his parents and sister Suzie was another agonising moment.

“I remember that feeling, there’s also a heavy burden on everyone around the patient,” Bradley admits. “I knew that they were going to be going through a different kind of suffering. And that was really hard, knowing I had to put them through that.”

O’Kane, meanwhile, “stepped up to become the breadwinner”, in Bradley’s words. Her workload at the time was fairly Herculean even by regular standards: there was feature film work, appearing as a contestant on Dancing with the Stars, providing the voiceover for Gogglebox, writing and preparing two live tours, and a number of corporate gigs. All the while, she never alluded publicly to her other “job”, of looking after a seriously ill cancer patient.

“I think Dee was just thinking that she didn’t want people to know, in every work situation she had to go into, because then you do have to tell the story quite a lot. And you’ll just hear, ‘oh dear, well that’s not going to work out, is it?’,” recalls Bradley. “It was pretty extraordinary and I think she’s pretty shocked by herself in retrospect. But all of it seems so surreal now. But trying to be a comedian, and to have that lightness of energy in a professional way, that was almost like a cruel joke in itself.”

Bradley reached a personal nadir, strangely enough, once he had been given the all clear from cancer.

“It was a slightly unsettling time,” he admits. “I’ve read a lot of cancer patients say that the time after you’ve gotten the all clear is sometimes the hardest, mentally and for relationships.

“When Dee read the first draft of the book – and I write at the end about how I’m anxious no more – she said, ‘that’s exactly how I feel’. We’re back to where we were, in a really good way. Life is fun.”

The couple, who made a formidable professional pairing on the biopic Noble, are teaming up again to work on The Deirdre O’Kane Show, which will be filmed early next year in the Olympia Theatre for Sky.

Interspersed throughout Shooting & Cutting are memories from Bradley’s prolific film-making career, from developing new projects and scripts to the pre-production hell on one film, Wayfaring Strangers. The project, a second World War thriller starring Cillian Murphy, Michael Gambon and Robert Sheehan, unexpectedly collapsed on the last day of pre-production in 2011.

“That was absolutely terrible,” he recalls. “Other film-makers couldn’t believe you could get that close, within a couple of weeks [of production] for it all to collapse. I was absolutely terrified of Noble hitting the skids [financially] as well, because I was producing it as well.”

For now, several of Bradley’s other scripts and projects are at various stages of development. On a personal level, he is becoming accustomed to the glorious humdrum of a regular existence.

“Some people say that [recovering from a life-threatening illness] does completely change your life, but I’m still kind of in shock over the whole thing,” Bradley admits. “It’s a bit of a struggle when you suddenly realise the second chance you’ve been given, but at the same time there are moments of absolute joy. It’s a vulnerable place, where you need to get the strength back and almost get your confidence back as an adult.

“If there’s a whole day where you go and don’t think about cancer at all, that’s a huge day for you.”

Shooting & Cutting by Stephen Bradley is out now via Mercier Press.