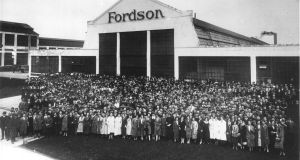 The workforce at the Ford motor company in Cork

RTÉ catches a lot of flack over the uneven quality of its scripted drama and comedy but one genre at which the broadcaster has long excelled are documentaries reminding us that life in Ireland used to be Shocking, Horrible, Intolerant, Theocratic and Exasperating.

The Citizen Kane of the milieu is Reeling In The Years, which paired old Rolling Stones and Creedence Clearwater Revival tunes with grainy footage of politicians kissing bishops’ rings and of people leaving Ireland to work in Britain.

Somehow this juxtaposition of escapist pop and mid-20th century spiritual and economic repression – with the occasional bonus clip of Charlie Haughey seeing off another backbench heave – was woven into TV gold.

The Way We Were (RTÉ One, 9.30pm) doesn’t quite crackle with that same magic, and a 60-minute run time arguably verges on overkill. But in its three instalments the series, which blends old news coverage with talking head contributions, was nonetheless been highly diverting.

It also reinforced the impression that, until the Celtic Tiger, 90 per cent of day-to-day life in Ireland consisted of mumbling rosaries or queuing for the dole. Our haircuts could have been better too.

The first two episodes were about holidays and shopping. The third concerns the workplace – the unemployment line, as it was known in the 1980s. Bombshells do not fall thick and fast.

We learn that working women were perceived as essentially a slight against god, man and the Constitution. And that the industrial jobs that came late to Ireland in the 1960s – when Seán Lemass opened up the economy – didn’t linger long.

They were gone by the 1980s, as Ford, Dunlop and the rest shuttered. As compensation, there was Self Aid, the 1986 charity concert which asked us to consider if there was anything worse than the slow boat to a building site in Cricklewood.

The answer – which was obviously “yes” – is provided by footage of Bono, Chris de Burgh and Christy Moore joining in on the Self Aid anthem Let’s Make It Work. “I can build a house, I can dig a hole,” they sing. “I can mend a fuse, I can climb a pole”. Whether Bono nipped home immediately afterwards to mend a fuse or climb a pole – or perhaps both at once – is lost to the mists of history

The contributors are good value, even it’s sometimes obvious that they are being fed lines from a script. Radio presenter Ciara Kelly recalls being harassed by creepy old men while working a job as a lounge girl in her early teens. Brendan Courtney, the TV host and fashion designer, recounts an early job hosing down the walls in slaughterhouse. And comedian Katherine Lynch tears up remembering an old boyfriend breaking it off with her when his job at the Arigna Mines in Roscommon vanished into a hole in the ground.

This brisk format is a smart choice. There is a lot of misery to unpack – decades of poverty, stifled dreams and lives unlived. Yet The Way We Were makes a decision to look on the bright side.

The unspoken message is that, though life is of course challenging for many today, at least we have left behind the crushing despair and hardwired misogyny of 20th century Ireland. Many countries have a warped nostalgia for their past. The argument The Way We Were presents is that for Ireland the future has never been able to arrive fast enough.