From David Copperfield to Paul Daniels, the trick is as iconic as pulling a rabbit from a hat 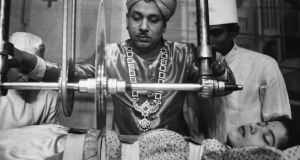 Sorcar, the Indian magician, cuts his assistant Dipty Dey in half in London in 1956. Photograph: Terry Fincher/Keystone/Getty

A hundred years ago next weekend a magician named Percy Thomas Tibbles literally and laboriously sawed through a sealed wooden box that contained a woman.

It was a sensation that has since become one of the best-known magic tricks, performed with all manner of tools and varying degrees of blood – always involving someone cut in half and nearly always with them miraculously put back together.

On Sunday, January 17th, the Magic Circle will mark the centenary of sawing someone in half, an illusion as iconic, its president Noel Britten says, as pulling a rabbit from a hat.

Debbie McGee has been sliced, diced, cremated, crushed, divided and decapitated more than most so has a great story to tell

It has a “rich and fascinating” history, Britten says, although the reasons for its almost instant popularity in 1921 may not be the noblest. Suffrage was the hot topic of its day, so was it that “for every person who thought it was great that women were getting the vote, there were other people who thought it great that a woman was being put in a box and sawn in half?”

The illusion was invented by Tibbles, whose stage name was PT Selbit, and was first performed at the Finsbury Park Empire, in north London, on January 17th, 1921.

Since then it has been performed by countless magicians in many different ways. “It is a very simple, clear idea and is easily understandable as impossible,” says Will Houstoun, magician in residence at Imperial College London’s department of surgery. “As an effect it has a neatness about it and has a huge amount of scope for development and reinvention.”

Houstoun says Selbit’s original illusion did not have the woman’s head and feet sticking out of the box, which would become the tradition. The sawing was also real and slow. “It would have been quite a lengthy process... I suspect attention spans would be slightly different today.”

The Magic Circle is planning an evening of online events around the history of the illusion, telling stories such as how the BBC shocked Britain in 1956 by broadcasting a Panorama programme that featured the Great Sorcar slicing a young woman in half with a circular saw.

Because the show was live and out of time, its presenter, Richard Dimbleby, stepped in to say goodbye before the woman came back to life. “The switchboard was jammed with people thinking they had just witnessed a murder,” says Britten.

Houston says one of the most memorable versions for him was by Simon Drake in the late-night 1990s Channel 4 show Secret Cabaret. It involved medical staff sawing through Drake from his crotch up to his chest and Drake not waking up. “You don’t forget it,” says Houstoun, who was too young to watch it in the first place.

The US magician David Copperfield will show viewers around his magic museum in Las Vegas and talk about his interpretation, using a huge “death saw” that cut through him after he failed to escape the table.

Naomi Paxton, an academic and performer and the Magic Circle’s equality and diversity officer, will explore the illusion’s links to suffrage and reveal how Selbit audaciously invited the militant suffragette Christabel Pankhurst to become part of his act by being the woman sawn in two.

It came after Pankhurst had advertised her services in a newspaper for “remunerative, non-political work”, and although it was entrepreneurial of Selbit to offer, it was also “hugely disrespectful”, says Paxton. Unsurprisingly, she said no.

The evening will also see Debbie McGee, the partner of the late Paul Daniels, both on stage and in life, recounting her experiences of being regularly dismembered. “Debbie has been sliced, diced, cremated, crushed, divided and decapitated more than most so has a great story to tell,” says Britten. – The Guardian