Review: WandaVision is a mystery, a satire and a love letter to the great American sitcom 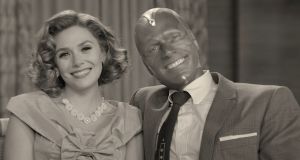 From Martin Scorsese to Ken Loach, Marvel has become a bete noire for cineastes who think popular culture would be better off without quite so many caped wonders zipping around in spandex. In fact, the superhero powerhouse has always been a risk taker. It took a gamble on Robert Downey jnr as Iron Man – Downey jnr was regarded at the time as an unemployable drug casualty. And it has gone on to essentially invent the new genre of long-form popcorn cinema, with the Marvel Cinematic Universe, and to unleash into the multiplex such unlikely heroes as a talking tree and a man who rides around on ants.

WandaVision, the MCU’s first foray into streaming TV (not counting the written-from-history Marvel Netflix shows), is perhaps its pluckiest punt yet. Starring Elizabeth Olsen as Wanda Maximoff/Scarlet Witch and Paul Bettany as a living quantum computer named Vision, the series (Disney+) is a mystery, a satire, a love letter to the great American sitcom and a daring recalibration of the Marvel brand. It’s the most audacious – and, yes, entirely bonkers – piece of throwaway television in recent entertainment history.

Marvel movies are sometimes accused of being all action and no plot. WandaVision has enough plot to light an entire town. A small, all-American town such as Westview, for example. This is where Wanda and Vision have made their new home, in a black-and-white opening episode that unfolds as a perfect pastiche of 1950s American comedies such as I Love Lucy.

It’s a hilarious and fond parody. Wanda uses her powers to send dishes flying over her head, Vision disguises his bright-red machine face by waggling his head. And then Kathryn Hahn turns up as a helpful but prying neighbour.

Obviously there’s more going on than meets the eye (even supercomputer eyes such those possessed by Vision). Weird glitches are soon impinging on Wanda and Vision’s perfect world. And when Vision’s boss starts to choke to death at the end of the first instalment and his wife just keeps laughing, like a machine on a loop, a deep unease descends.

The uncanniness escalates in part two. (Further episodes will arrive week by week.) The setting has scooted forward a decade, to the 1960s, where WandaVision is riffing on beloved hokum such as I Dream of Jeannie and My Favorite Martian. But the spooky occurrences are stacking up. A bright-red helicopter discovered on a hedge breaks the black-and-white spell. And then a man in a beekeeper suit climbs out of a sewer, prompting Wanda to roll back time.

What’s happening? Is this a purgatory for Vision, who was killed by Thanos at the end of Avengers: Infinity War? How to explain the voices bleeding through a radio, calling out to Wanda?

The true nature of their predicament will, presumably, be revealed over the next two months. Until then, Marvel fans, and potentially curious newcomers too, will enjoy watching Wanda and Vision romp around in a gilded cage wrought from pure TV nostalgia.

WandaVision is available on Disney+ from today