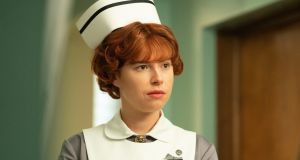 Jessie Buckley is already on her way up the a-list and there’s a decent chance she’ll receive an Oscar nomination for her performance in Charlie Kaufman’s I’m Thinking Of Ending Things.

So it would be an overstatement to describe the Kerry actress’s appearance as a sweet, psychotic killer in series four of Noah Hawley’s Fargo (TG4, 10.30pm) as a star-making turn.

She is, however, by far the best thing in an enjoyable if overstuffed season, which grapples with the thorny matter of racial strife in America. The setting is mid-20th century Kansas City, Missouri. And the subject is the power struggle between waves of migrants pushed into a life of crime because respectable society has no place for them. It starts with the Jews – then the Irish, Italian and African-Americans.

There are some Irish accents, including a twanging quasi-Dublin burr courtesy of Ben Whishaw (aka Paddington Bear). He’s portraying the heir of a Jewish underworld family raised by the Irish mob, whom he then betrays to the Italians.

That’s quite convoluted. But it is Hawley’s way of acknowledging the intertwined experiences of Jews, Irish, Italians and African-Americans across the span of American history. All were “othered” – all told they could never be real Americans.

The point is forcefully repeated early on as the head of the local Italian crime family is accidentally shot in the neck by playing children and rushed to hospital – only for the blue-bloods in reception to turn away a mortally-stricken man.

This institution isn’t for their sort of people (non-Anglo Saxons). The “public” hospital is down the road. Donatello Fadda is soon dead anyway – at the hands of Buckley’s smiling and skittish Nurse Oraetta Mayflower.

She’s softly spoken and walks like an old lady worried she is about to take a tumble. However, when no one’s watching she’s Hannibal Lecter in a bonnet. This we see when she throttles the life out of Don Fadda.

Nurse Mayflower can turn her butter-wouldn’t-melt grin on and off at will. It has been fully restored as she turns up to sympathise at the funeral. There, she offers condolences to Fadda’s son, Josto (Jason Schwartzman).

Schwartzman is, of course, a scion himself – of the Coppola family. And in Fargo he is essentially playing a quirkier Michael Corleone, as he seeks to retrench his dynasty’s grip on power.

Doing so will necessitate crossing Chris Rock’s Loy Cannon, head of the African-American syndicate. Loy’s ambitions extend beyond crime. He wants to go straight. And he even has a potential passport out of criminality: a new financial instrument he calls it “the credit card”.

Hawley is spinning a lot of plates here – and that’s before mentioning Emyri Crutchfield, as the child of a mixed-race marriage who befriend’s Buckley’s nurse from hell.

Fargo is ostensibly inspired by the 1996 Coen Brothers movie of the same name. And so, the wackiness is laid on almost as thickly as the violence. There are loopy camera angles, a set-piece involving breaking wind and a scene in which Nurse Mayflower grins as she bungs a poisoned pie in the oven.

Yet Buckley’s performance – searing but also somehow studied and chilling – cuts through. Amid the heavyweight cast, her star shines brightest.