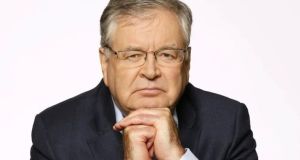 Liveline: Joe Duffy’s phone-in has played a crucial role in bringing to light the horrific secrets of Ireland’s clerical institutions

It may be an accident of timing, but it’s entirely fitting that Liveline (RTÉ Radio 1, weekdays) is the first programme to follow Wednesday’s broadcast of Micheál Martin’s contrite Dáil speech on the mother and baby homes report.

After all, Joe Duffy’s phone-in has long played a crucial role in bringing to light the horrific secrets of Ireland’s clerical institutions. In a week when survivors’ gut-wrenching testimony is heard across the airwaves, Liveline still seems the most appropriate forum for the initial verdict on the official apology about the shameful, and shaming, homes.

For Duffy’s callers, the consensus on the Taoiseach’s speech is that for all the heartfelt expressions of sympathy, sorry is the easiest word. “In my opinion, it’s all a bit late down the line,” says one guest, Mary Fitzgerald.

What was unprecedented coming from Bertie Ahern or Enda Kenny now sounds rote and empty, given the previous lack of concrete redress for mother-and-baby-home survivors

“I just hope and pray that Micheál Martin will follow through with what he has promised to do today, and that it won’t be another 10 years down the road,” remarks another caller, also called Mary, who thinks the report is “very sanitised”.

Duffy sums up the general mood. “Survivors don’t just want an apology, they want action,” he says on Tuesday, echoing the sentiments of those sharing their experiences. Clearly, what was unprecedented coming from Bertie Ahern or Enda Kenny now sounds rote and empty, given the previous lack of concrete redress for survivors.

Listening to their stories, it’s easy to understand why survivors want more than sorrowful words. The broad contours of what they suffered are grimly familiar, but the individual details are as shocking as ever.

Mary Fitzgerald recounts how she was taken to Bessborough mother and baby home, in Co Cork, as a 13-year-old girl, pregnant after being raped. (The rapist was never charged.) Though her parents wanted Mary to stay with them, the local hospital refused to allow Mary to give birth there, after a priest opposed the move. Inevitably, Mary’s daughter was put up for adoption by the home. It’s also worth noting that this didn’t occur in de Valera’s Ireland of the 1940s, but in 1977.

Mary’s experience is a personal tragedy, but it also starkly illustrates wider truths. The institutional pressure brought to bear on Mary’s supportive family contradicts the official line that “society” bore much of the blame for her ordeal. “The one word that keeps coming up in all this is power,” says Mary, as she contemplates the Catholic Church’s influence at the time. “The power they had over the people was mind-boggling.”

This is just one woman’s experience. Duffy hears many others recount how they were marked by the homes, as mothers or children, with each account further illuminating the callousness of the system and the mores behind it. “Where are all the fathers?” asks Catherine, born in one such home. “Do they not want to know what happened?” It’s a vital question, but is conspicuously unanswered.

Duffy punctuates his callers’ memories with historical observations on the nexus of church and State power, but his approach is still resolutely personal. The unspeakable figure of 9,000 children dying in the homes is hardly mentioned, though it looms throughout.

Instead, in his folksy, familiar way, Duffy focuses on those still with us, providing unfettered space for voices that were previously silenced. “Thanks for letting us tell our stories,” says one caller, Elizabeth. “It’s a privilege,” Duffy replies, “since the first call we got on this topic many years ago”. This might sound like dutiful humility, but Duffy is correct to emphasise that the people who brave the radio to reveal their deepest traumas are the ones who deserve our gratitude, and more.

The issue rightly dominates the airwaves elsewhere, the multitude of interviews with survivors underscoring how deeply embedded in Irish society the mother and baby infrastructure was.

On Wednesday’s Morning Ireland (RTÉ Radio 1, weekdays), Audrey Carville talks to Mari Steed and Teresa O’Sullivan, who tell of their lives as children adopted from the homes. Both make telling observations along the way.

Mari, who was raised in the US, recalls becoming pregnant as a teenager and giving up her child for adoption: “That stigma followed us across the Atlantic,” she says. Moreover, Mari chides the commission report for downplaying physical abuse: the appalling mortality rate in many homes surely counts as abuse, she says. Like others, she is also unhappy with how culpability is apportioned: “It’s trying to foist blame on society and away from State and church.”

Meanwhile, Teresa, who talks about her “wonderful” adoptive family, highlights a less obvious but profound theme running through survivors’ accounts. “There was always a longing, this question of who am I and where did I come from,” she says.

The system that separated people such as Teresa from their birth mothers also prevented them accessing basic personal information (and continues to do so), denying the agency over their own lives that most of us take for granted. “We need to put it down on paper, because then it becomes authentic,” Teresa says, eloquently articulating why access to records is such a key issue.

The air of discontent carries over into Today with Claire Byrne (RTÉ Radio 1, weekdays). The playwright and adoption-rights activist Noelle Browne is startled at how her testimony to the commission of investigation has been treated. Having requested a transcript of her account, she says that questions have been “shoehorned” in, as though she was responding to them. (She wasn’t.) Worse, she spots 10 “glaring inaccuracies”. For example, that she was raised by her birth parents. Browne concludes the report doesn’t have a “survivor-centred approach”.

None of this inspires confidence, but more dispiriting is the official response to Browne’s concerns. Byrne’s team eventually elicits a statement to the effect that the commission doesn’t “propose to respond” to these points. This tone seems as arrogantly opaque as the closed institutions under investigation. After that, the listener doesn’t just feel sorrow on behalf of Browne and her fellow survivors, but anger as well.

Moment of the Week: Kudos to Kenny

Negative coverage of the way the Government is handling the third wave of Covid-19 may have been temporarily distracted by the even worse story of the mother and baby homes, but there’s still opportunity for the issue to trip Ministers up, as when Minister for Health Stephen Donnelly appears on The Pat Kenny Show (Newstalk, weekdays).

Kenny is well briefed and polite as he discusses the vaccine roll-out, but he is more forceful about the bungled reopening that resulted in soaring case numbers. When Donnelly responds by boasting about Ireland having Europe’s lowest case numbers in November, Kenny is dismissive: “We could go on and on about how brilliant we were during the second wave,” the host says. “Just say yes, we made a mistake.”

Instead, Donnelly asserts that cases wouldn’t have surged so quickly had the UK variant of Covid not arrived. Kenny is having none of this: “It’s nonsense.” For a Minister who assiduously cultivates his data-centred image to indulge in such face-saving counterfactuals is indeed ridiculous. Kudos to Kenny for calling it out.