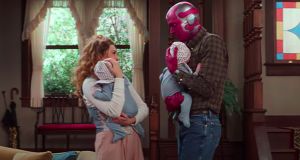 Predictions are tricky in any walk of life. And after the 12 months we’ve all just come through, attempting to read the tea leaves feels especially foolhardy.

Yet in a world gone mad, bad and slightly sad, television has emerged as that rare rock of dependability. And that despite the fact it is itself in the midst of a period of historic change. With technology having in many ways reached its outer limits for the time being – smartphones aren’t getting smarter, social media approaches “peak” toxicity – it’s sleepy old TV that is having its big disruptive moment.

Or to put it another way: television is starting to look less and less like television and more like cinema. That trend is set to accelerate towards a critical mass through 2021.

This is to a large extent due to the pandemic. With cinema attendances potentially not recovering until 2022, Warner Bros and its subsidiary HBO Max have announced – in the face of grumblings from Christopher Nolan and other directors – plans to simultaneously release their big-ticket movies on streaming and in cinemas.

HBO Max global boss Andy Forssell has furthermore indicated the service will be rolled out “in much of Europe” by the end of next year. Setting aside how this will affect HBO’s arrangement with Sky Atlantic – which has exclusive rights to HBO output in Ireland and Britain – it isn’t beyond the bounds that 10 months from now we could all be sitting down to Denis Villeneuve’s Dune in our living rooms. The content must flow.

But the novelty of watching a box-fresh tentpole movie on our flatscreens may have worn thin by then. We will have already enjoyed Godzilla v Kong, The Matrix 4, In the Heights and the one one we’re all looking forward to, Space Jam: A New Legacy. All are part of the slate Warner plans to make available to stream from day one.

Even when Hollywood isn’t beaming its hottest blockbusters straight to our homes, many of the most anticipated shows of 2021 have a distinctly cinematic tinge. The Marvel Cinematic Universe will, for instance, pivot to streaming on January 15th as Disney + debuts WandaVision.

The Avengers spin-off brings back Elizabeth Olsen and Paul Bettany as Scarlet Witch and Vision: the Terry and June of spandex-wrapped crime-fighting. Superheroes tend to be dismissed by purists as the great curse of our era. Yet in WandaVision, Disney appears to be trying something different.

The setting will be a creepy, Stepford Wives-esque suburbia, where Wanda (Scarlet Witch’s real name) and Vision (Vision’s real name) are making a new life. However, all is not as it appears. Judging by a recent trailer, the dynamic domestic duo are victims of an elaborate game of gas-lighting. Conspiracy theorists … assemble!

WandaVision represents a hastening of the shift away from old distribution modes by Disney, which has been hugely disrupted by coronavirus. Other Disney + shows due in 2021 include The Falcon and the Winter Soldier, starring Anthony Mackie and Sebastian Stan, which is set for a March release.

Tom Hiddleston is back, too, as god of mischief Loki in May. He will star alongside Owen Wilson and Gugu Mbatha-Raw in a limited-run romp with a time-travel plot that feels like a second cousin to Christopher Nolan’s Tenet. And then Jeremy Renner will strap on his long-bow for Avenger’s Hawkeye in late autumn.

That’s quite an infinity gauntlet thrown down to Disney’s streaming rivals. Netflix and Amazon, rest assured, have plenty of ammunition in reserve, however. Eve Hewson will hope to put behind her unhappy memories of the BBC’s dreadful The Luminaries – so dark, so incomprehensible – when she appears in Netflix’s Behind Your Eyes, in which she plays a single mother embarking on an affair with a psychiatrist.

Netflix’s 2021 roster also includes adaptations of Neil Gaiman’s Sandman, produced by Gaiman and Dark Knight writer David Goyer; and of Leigh Bardugo’s wonderful YA fantasy novels Six of Crows and Shadow and Bone, starring Chronicles of Narnia’s Ben Barnes. Plus there will be a small-screen take on fantasy card game Magic: The Gathering, created by Avengers directors the Russo Brothers.

Game of Thrones fans – are there any left ? – will have something to look forward to, too. David Benioff and DB Weiss are working on an adaptation of Liu Cixin’s sci-fi mind bender The Three-Body Problem (think Kubrick’s 2001: A Space Odyssey only with extra maths). And Stranger Things will be back, with shooting having recommenced on series four.

Netflix is often shy regarding release dates. However, it’s likely that at least some of these TV dreadnoughts will slope into view in 2021. Behind Her Eyes is expected in the first quarter. As is The Irregulars, a Sherlock Holmes “spin-off” by Watership Down scriptwriter Tom Bidwell focusing on the ragamuffin street urchins who help Holmes in the Arthur Conan Doyle stories. And January 22nd will welcome Wicklow-shot tween supernatural dramedy Fate: The Winx Saga.

Amazon, for its part, continues to forge ahead with a two-hander of fantasy epics: an adaptation of Robert Jordan’s Wheel of Time – essentially Game of Thrones without the “edgy” sexual violence – and a $1 billion Lord of the Rings prequel currently shooting in New Zealand.

Neither is expected in 2021. But to keep us ticking over there will be a new series of gory superhero satire The Boys. And a series based on the Brian K Vaughan graphic novel Paper Girls about time-travelling newspaper delivery girls.

Of all the small-screen blockbusters due in 2021, the one with the biggest Irish input will be Apple TV+’s adaptation of Isaac Asimov’s Foundation series, which traces the fall and rise of human civilisation centuries in the future. It was shot at Troy Studios in Limerick. Troy’s first major project, Netflix’s version of George RR Martin’s Nightflyers, was a disaster, with impressive production values failing to compensate for a dull and absurd script.

Foundation will hopefully fare better. The source material is certainly rich enough. Taken together with Dune, it suggests, moreover, that fantasy may be about to take a back seat to science fiction.

The one show to rule them all in 2021 from an Irish perspective is sure to be Lenny Abrahamson’s adaptation of Sally Rooney’s Conversations With Friends. Abrahamsons’s take on Rooney’s Normal People, for the BBC and Hulu, was one of the most talked and tweeted about shows of 2020. And with Conversation from Friends arguably a superior novel to Normal People, in that it had a more fleshed-out plot, it seems inevitable that it will be just as big a success.

Along with Abrahamson directing, it has been confirmed that Rooney will once again write the script with Alice Birch. However, other details are scant. The cast, for instance, has yet to be unveiled. That announcement will be closely watched. Given the impact Normal People had on the careers of Paul Mescal and Daisy Edgar-Jones, Conversations with Friends could very well mint another batch of stars.

Irish viewers may also be interested in Bloodlands, a BBC thriller starring James Nesbitt as PSNI detective Tom Brannick, alongside Lisa Dwan and Charlene McKenna. It’s produced by Line of Duty’s Jed Mercurio and has been filmed in Belfast and around Strangford Lough, with a script by Co Down-raised writer Chris Brandon.

Northern lights of a different sort will twinkle as Lisa McGee’s Derry Girls returns for a third series, having been delayed for a year by Covid. South of the Border, however, it’s difficult to see how a cash-strapped RTÉ can compete with the ever-rising quality of international scripted TV.

Yet the broadcaster will surely aspire to improve on an underwhelming 2020 in which the dreadful South Westerlies represented a new low point. The alternative is Irish television drama becoming even more of a backwater than it already is (RTÉ’s documentaries, by contrast, remain excellent).

There was, it is true, a flicker of light in November with Dead Still. This co-production with American streaming service Acorn TV did not set the world aflame. But it at least tried to be different, with a Victorian Dublin setting and supernatural plot that showed us something we hadn’t previously seen on RTÉ.

Up against dramas with the production values of tentpole cinema, Montrose is obviously outgunned. The hope must be that in the year ahead it comes to see its underdog status as a strength. Only by thinking outside the box can it hold its own against a never-ending deluge of blockbuster content.